This was supposed to be a story about travel.  I have decided that every Friday or so (I’ve always been a little non-committal) I am going to write a story about some of my travels around the world.  The story that unfolded in the horse pen last night though is such a good illustration of my life with Horsecrazy, that I couldn’t resist sharing it.  Africa will still be there next week. 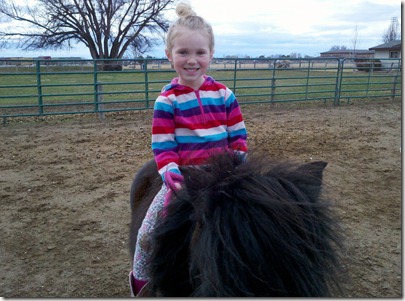 I had spent the day cleaning my office.  Emboldened by my success with Batman’s room, I had purchased some new bins (!) at the Super Walmart, dropped the kids off at daycare to play with their friends, and dug in.  In short order my formerly slightly messy office looked very similar to the “before” pictures in the “Organizing Batman” post earlier this week, except that instead of heaps of plastic trucks and naked baby dolls it was covered in piles of papers and boxes of files.  I took a picture, but it is just too humiliating to share.

Anyway, after two hours of cleaning and then another two engrossed in reading some of my travel journals, I was rushed to go get the kids and pick up the dog from the vet.  I think I mentioned that Winston the Maniacal Birddog Puppy was getting neutered this week.  I pulled my mind from racing over the plains of the Masai Mara on horseback full tilt after zebra, and climbed into my Durango to go do my rounds.

Which to me means “No” and to Horsecrazy means “Absolutely!”

She beat me to the pens, wearing long john bottoms with no pants over them because she absolutely refuses to wear jeans more than once and it was office cleaning day today, not laundry day.  What I saw when I arrived caused me to laugh in spite of myself and pull out my phone for some pictures.

She had caught the pony and tied his lead rope into reins, leaving a small length extended for a “whipping rope” (her words, not mine).  She’d also brought along a bucket to climb on because she knows from experience it is hard to get Reno to stand close to the fence long enough to get on. 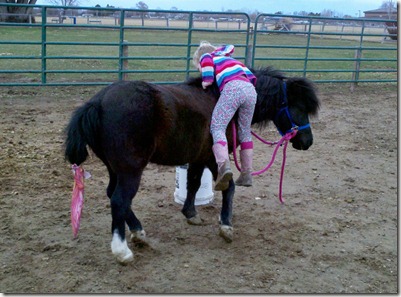 She almost got on on her first try.  But didn’t quite make it.  She put the bucket back and tried again.  The pony moved away.  She laughed and moved the bucket. 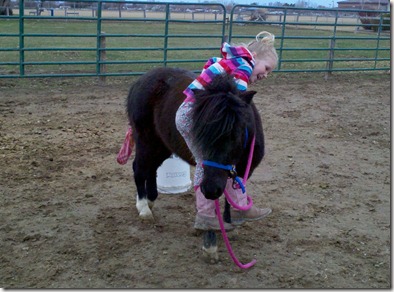 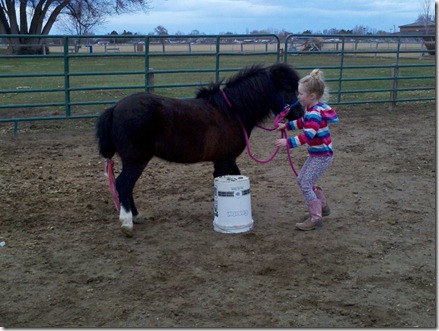 I have to say she has try, that girl.

Finally!  Sweet success!  She was on. The pony walked one step, Winston the Maniacal Birddog Puppy barked in exuberance and the pony bucked her off.

This is not unusual.  She ends up on the ground pretty much every day.  She got back on again, after much bucket maneuvering and pony positioning.

Then she proceeded to trot around the pen at a high rate of speed. 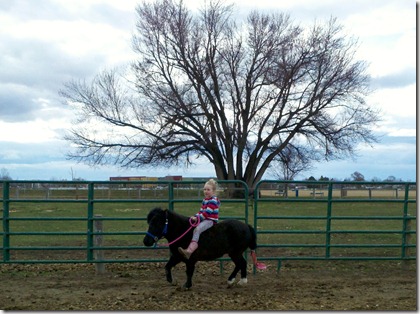 I admonished her “NO loping!” and went in the house to get the beets on to boil.  After about thirty minutes I noticed that Horsecrazy was nowhere to be seen.  I went back outside.

She was loping around the pen.

She had removed the halter and was holding on to the lead rope looped around Reno’s neck with one hand and the dangling halter with the other. I took some awesome video of the event.  For some reason my camera didn’t save it. I am bummed.  She’s really pretty good.

Cowboy Batman had fun doing his own riding last night.

Finally, I think Winston was happy to be home.  He came in the house when we were all finished up outside and laid down in his kennel.  He kept whining softly.  I gave him a treat and cooed “What’s wrong boy?  Are you OK?”  Handsome Hubby answered for him “He says ‘Has anyone seen my nuts? I can’t find my nuts!  My nuts are missing!!’”

He’s such a dog whisperer.