Batman and the Bounce House

Batman’s 4th birthday is coming up here in a week or so, and we wanted to celebrate early since Desperate Hubby is going to have foot surgery this week.  Don’t worry, there will undoubtedly be a story or two about that coming up.

We had originally talked Batman into a destination party…….we have been to several parties lately at Jabbers, an indoor playhouse in Nampa that has lots of cool toys and bouncy houses.  Desperate Hubby wanted Batman to have his party at Chuck E. Cheese.  Hubby loves Chuck E. Cheese.  Both sounded very appealing to mom-the-party-planner.  A time-limited party.  No set-up, no clean-up.

Then he changed his mind.  He wanted to have his friends over to our house.  To ride the four-wheelers.  That sounded simple enough. Problem was, we only have two four-wheelers.  I knew I could throw in a couple of pony rides too.  But that still left a dozen or more kids standing around wishing they were at Jabbers.

Then I came up with a brilliant idea.  We could rent a bounce house.  For the same price as a party of ten at Jabbers we could entertain a couple dozen kids for a whole afternoon.  Brilliant.

We went online to Idaho Inflatables (awesome company, by the way) and Batman picked out his house.  A “Superhero” bounce house.  He insisted I print out a big picture of the house and he put it in a plastic divider insert, which he then put in a large Ziploc bag for extra protection and carried it everywhere he went for an entire week.

The kids woke up at 6:00 on an absolutely beautiful Saturday morning to start watching for the “Bounce House Man.”  He and the house arrived at about 10:00.

They watched eagerly as the house was set up.

And wasted no time in jumping right in.  Jumping.  Get it.  Har har.

In good time the guests started to arrive.

Zach’s best friend from school came with his parents and sister.  He was a little camera shy, but we were sure glad he made it. 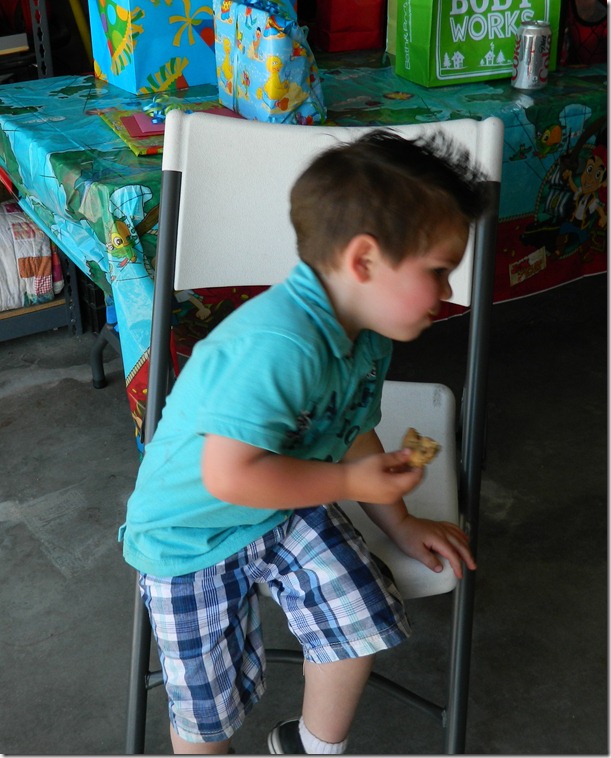 Most of the parents gathered in the garage, where we had food and drinks set up. 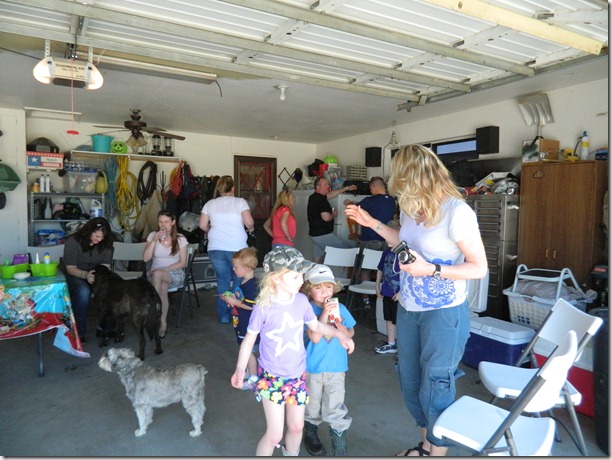 The pony rides were a huge hit. 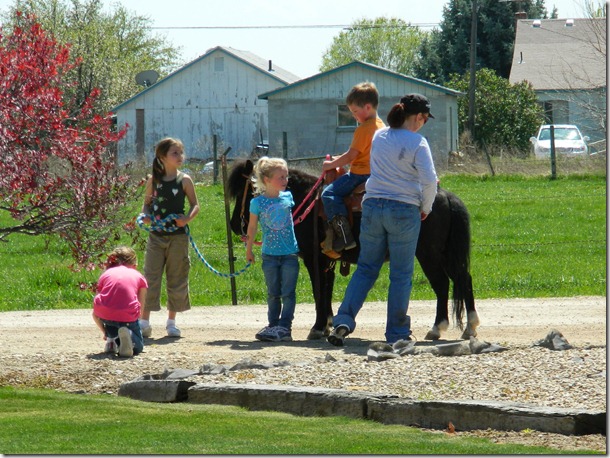 Both horses were going round and round pretty much the whole afternoon. This little cowboy came dressed for the occasion.  He rode at least four or five times.  So cute!

The four wheelers were also a very big draw. They were gone so much I didn’t get any pictures of them until they were finally parked in the middle of the driveway, both sets of batteries totally dead.

Of course, Desperate Hubby had to contribute his own special flare.  Rocket Man joined us midway through the party.  Everyone was very excited.  Especially the big boys (aka Daddies). 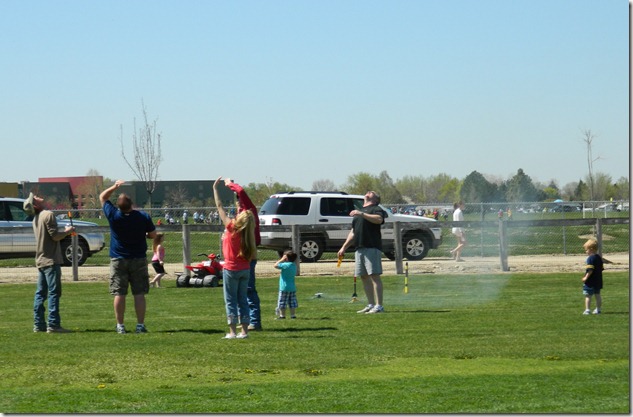 Hubby had been building rockets for a week or more to prepare for this day.  Of course chasing down the rockets after they landed was the kids’ job.

Fortunately, it was a very calm day, and the rockets landed almost directly below their original launch site. Almost. 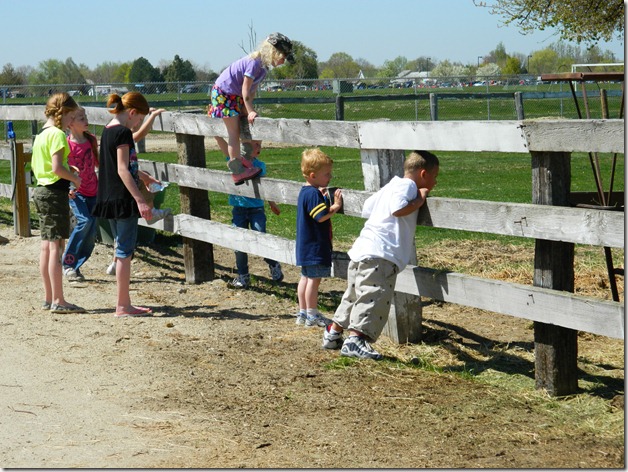 A couple of people took some time out to enjoy a more solitary pursuit away from the party madness. 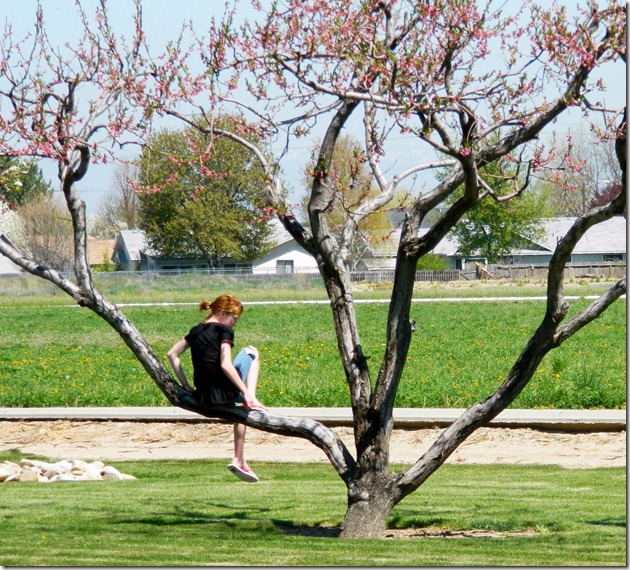 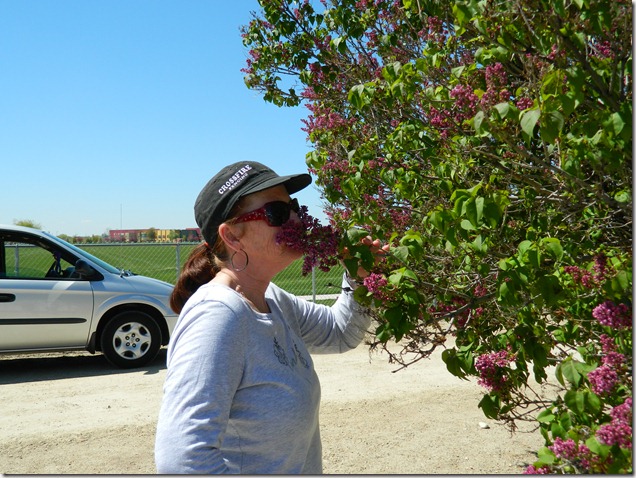 Auntie and Uncle posed for a nice family photo.  They are beautiful people, aren’t they?  Bet you can’t guess what Uncle does for a living.  Hint: yes, he does carry a gun.

A little break from the action for a cookie.

And lots and lots of jumping. 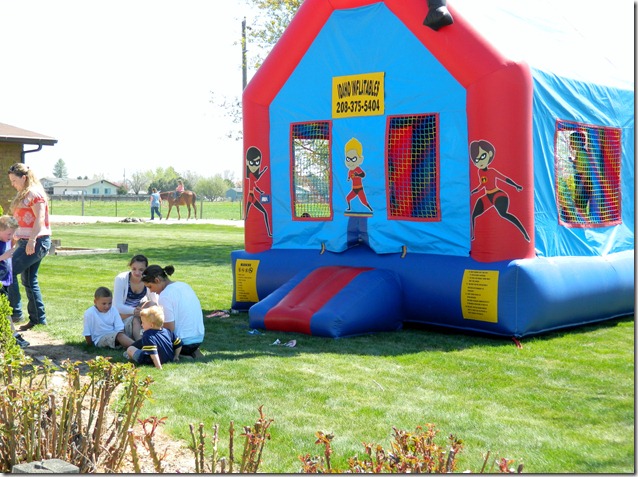 After all the partying, it was finally time for some cake.

With so many friends over, the singing was a little loud.

There were so many very cool gifts (thanks everyone!) 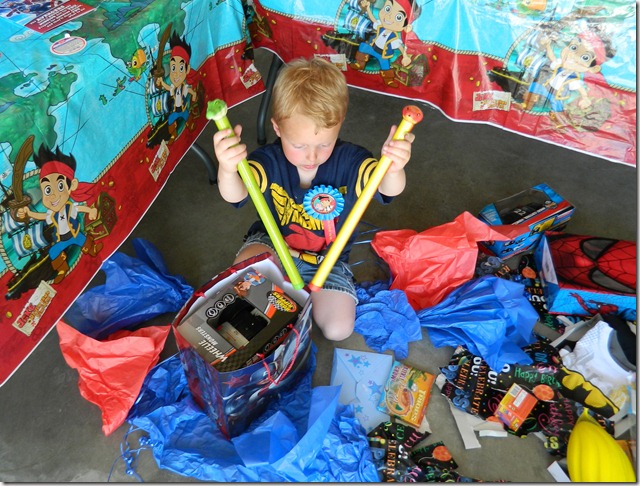 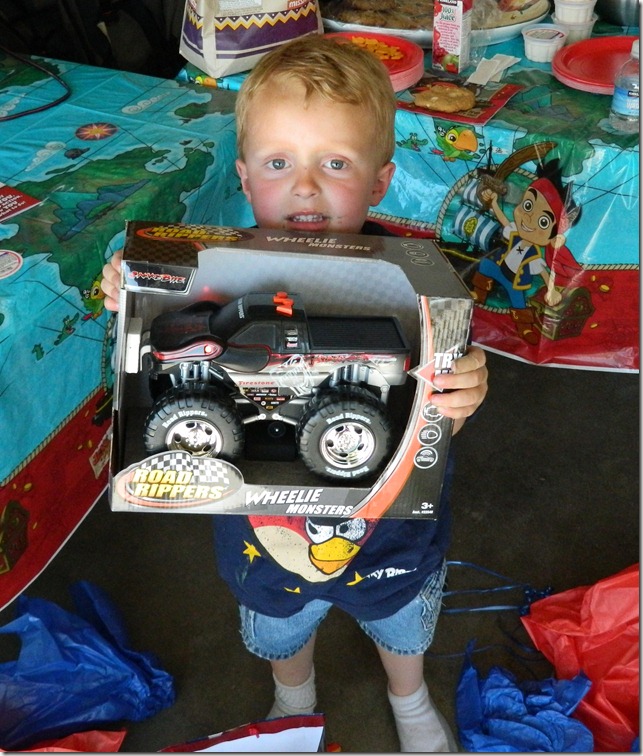 After the presents were opened everyone sort of trickled on home.  It had been a very fun (and hot) three hours.

Batman and Horsecrazy and their cousins cooled off with a nice water fight in the yard.

We had an awesome day celebrating Batman’s 4th.

As the party planner I would like to thank everyone who helped make it happen.  Wonderful neighbor Vernon manicured our lawns and made the place look spiffy as can be.  I could not have done it without the horse wranglers who helped walk the ponies around and around – thanks Aunties Susan and Melody.  And thanks to all the parents who jumped in to help serve, lead, manage and herd.

We hope you had as much fun as we did.

One thought on “Batman and the Bounce House”