Every summer since the kids were little we have gotten some sort of a swimming pool.  When they were really tiny it was one of those hard plastic ones, about 9 inches deep, and we sat it on the tiny slab of back porch at our old house.  The last couple of years we have gotten the blow-up variety, which Desperate Hubby would inflate, fill up with water, and dump and move around the yard as it was time to mow.

Last year’s pool was only inflated for about half an hour before Annabelle leaped into it and cut her knee quite badly on a piece of stick that was hidden under the plastic bottom panel and jabbed through the thin material when she landed on it.  She cried and bled all over, and although we taped the pool back up it never really held water after that.  The kids finally resorted to playing in the sprinklers or pulling out the slip n’slide for the rest of the summer.

Our recent Mother’s Day voyage to Eagle Island where the kids played in the swamp got them to thinking about our wonderful longstanding tradition of getting a pool for the warm weather.  I have come to discover that kids have pretty selective memories when it comes to family fun.  Once we exhausted my knowledge of snake trivia on the drive home, the subject turned to that of “When are we going to get our swimming pool?”  It was unseasonably warm on Mother’s Day this year, so the kids were absolutely convinced that they were missing out on the best part of summer because I refused to run out and buy them a pool that very afternoon.

Once I got the kids to bed that night I poured myself a glass of wine and pulled out the Sunday paper to flip through the ads.  The first ad I read was from Fred Meyer, and this was what was on the front:

I was surprised by the reasonable price of only $49, and the pool did look really easy to set up.  This was especially important because of DH’s continued convalescence, which would require Desperate Mama to figure out how to set up the pool alone.  DH and I talked it over and decided to go for it.  I was going to go get the pool yesterday morning while the kids were at pre-school and surprise them with it.

That plan lasted until the kids woke up and refused to get ready for school.   Zach absolutely would not get dressed unless I would let him wear his Batman shirt, shorts and cape, which incidentally are really pajamas.  I gave in to that pretty fast.  Annabelle, on the other hand, was not so easy to get going.  She was dragging her feet so much that I literally could not get her out the door.  I finally had to resort to my tried and true motherhood technique of “Bribery and Threats,” which I am not too proud to admit I resort to on a somewhat regular basis.  It went pretty much like this:

Me:  “Please get ready for school.  We are going to be late.”  Her:  “I don’t care. I don’t want to go to school today.  I am too tired.”  Repeat about ten times, with my voice becoming higher pitched and less polite as the conversation continued. Finally, Me:  “I am planning on getting you and Batman a surprise today, but if you don’t get ready for school quickly I won’t get my work done on time to go get you the surprise before school is over!” (bright, cheery voice).  Her:  “We are getting a pool!  Yay!  Batman we are getting a pool!”

We don’t really call Zach ‘Batman’ at home but we might as well.

Anyway, that was the end of the surprise, but the kids did get ready in record time and we even made it to school a few minutes early, the children chattering happily about the pool all the way.

After a whirlwind morning of chores and pool shopping, I picked the kids up from school. They ran right in and put on their swimsuits and the new water shoes I had purchased with the pool.

They had their new swimming noodles in hand, and were bubbling with excitement to start swimming.  I thought they might be a little overly optimistic, but I appreciated their enthusiasm. 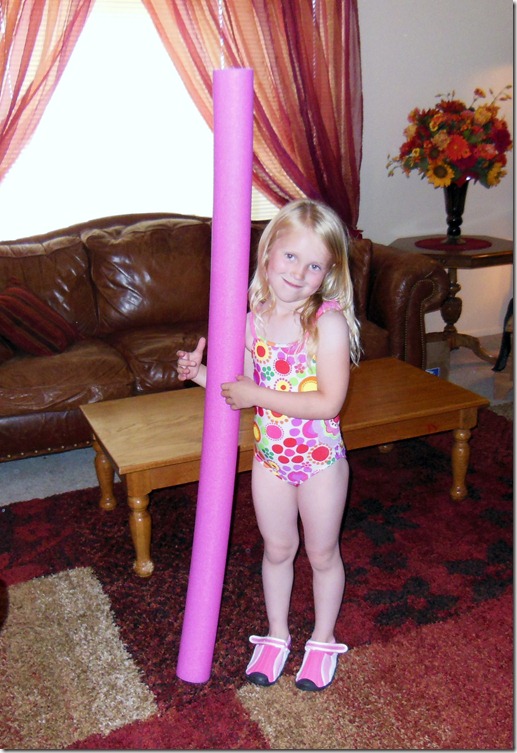 I hauled the pool and the air compressor to the back porch and assembled my team. 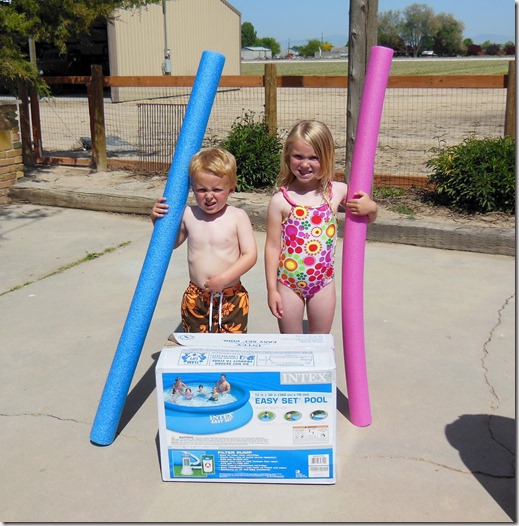 Then opened the box and put them to work. 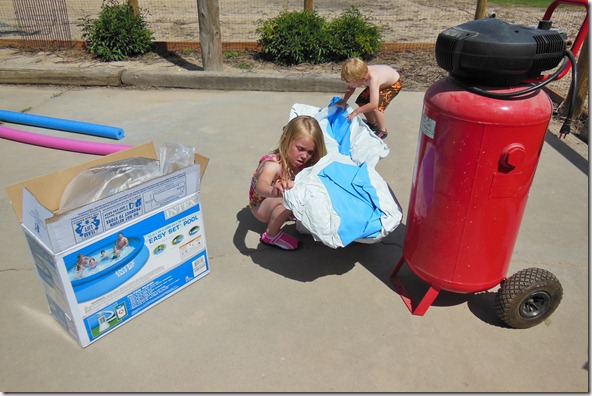 The slowly unfolded the heavy plastic and stretched the pool out.  They can be hard workers when they are motivated. 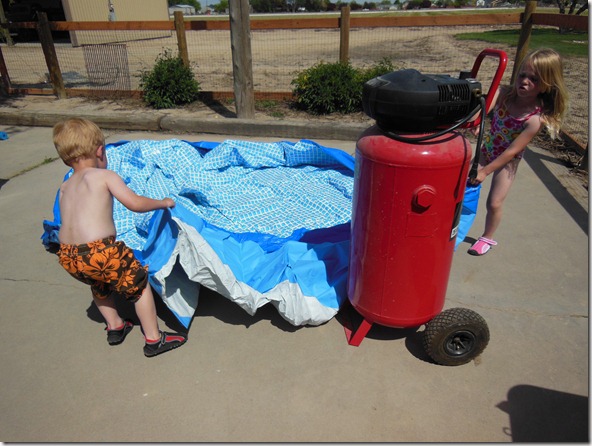 DH had come home for lunch, and I had convinced him to stick around and work from his recliner for the rest of the afternoon, so he could be here for consulting purposes.  Once the pool was out of the box he came out to take a look. 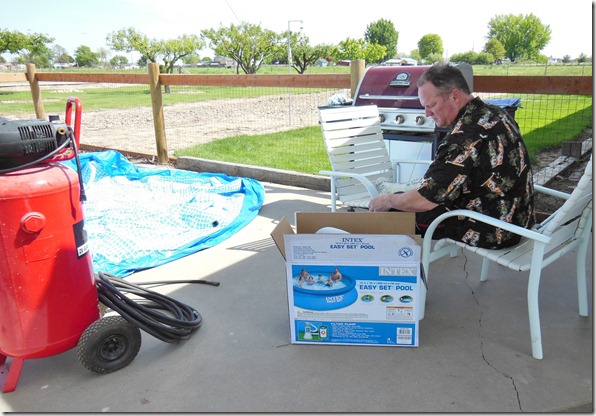 It turned out to be a very good thing he was there, because the nozzle I had purchased to put on the air compressor was not complete, and DH had disassemble another nozzle thingy to make it work.  I definitely would have never figured that out. 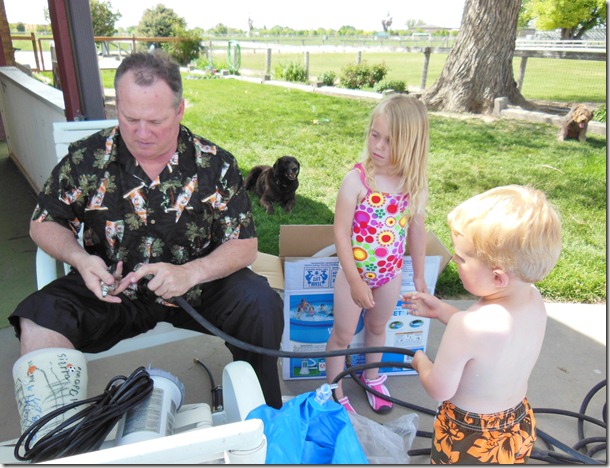 Once the air compressor was all fixed up I inflated the top ring of the pool and we put the hose in to start filling. I was surprised to see that that top ring was the only part that needed air; the rest apparently just rose up as the top floated with the rising water. 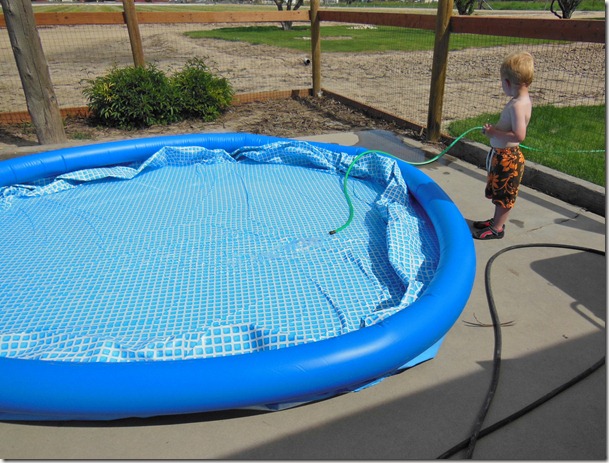 Once there was about a quarter inch of water in the pool the kids started playing in it. 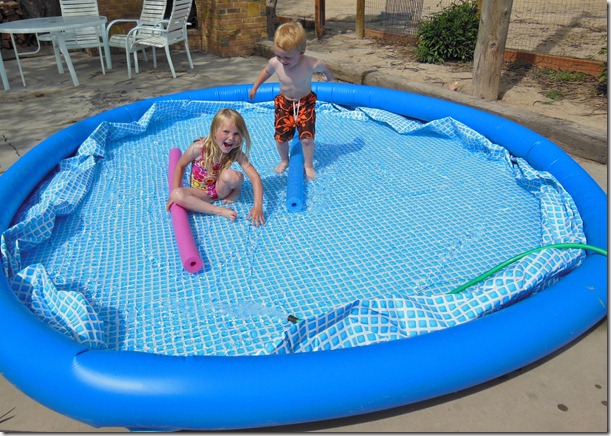 They continued to play as the water levels rose, shrieking with delight at each small gradient of fill. 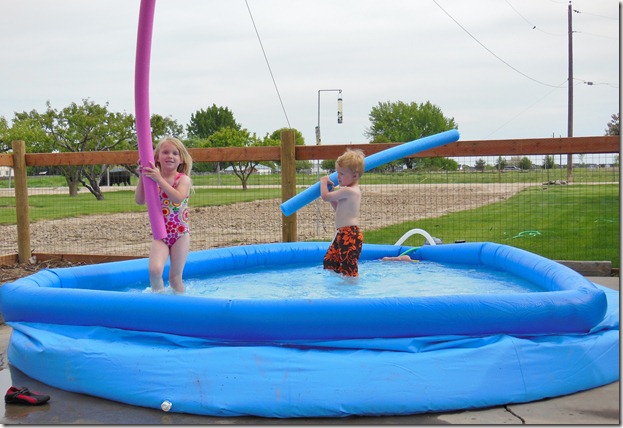 At about five I ordered a pizza, since we were all getting hungry and none of us wanted to go in and miss watching the pool take shape before our eyes.  The kids and I ate outside, the pool slowly rising beside us. 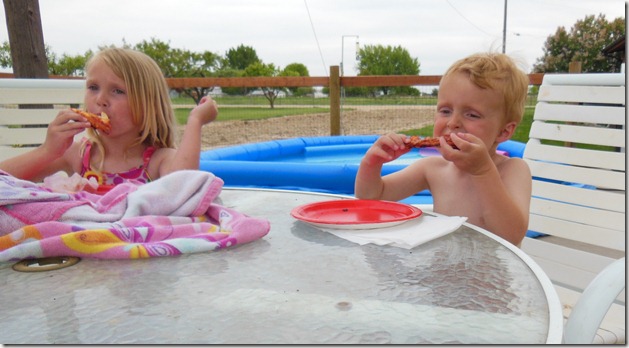 After dinner they were right back in the pool.  I didn’t make them wait 30 minutes, because technically they weren’t really ‘swimming’ yet.

They were delighted that the pool was now full enough to practice what they learned in swimming lessons last summer. Dunking. 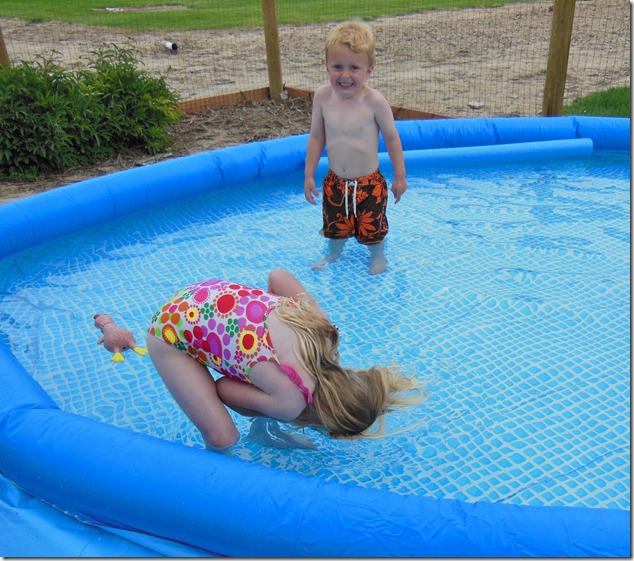 After some coaxing Batman followed.  By now it was about 7 pm and starting to cool off. 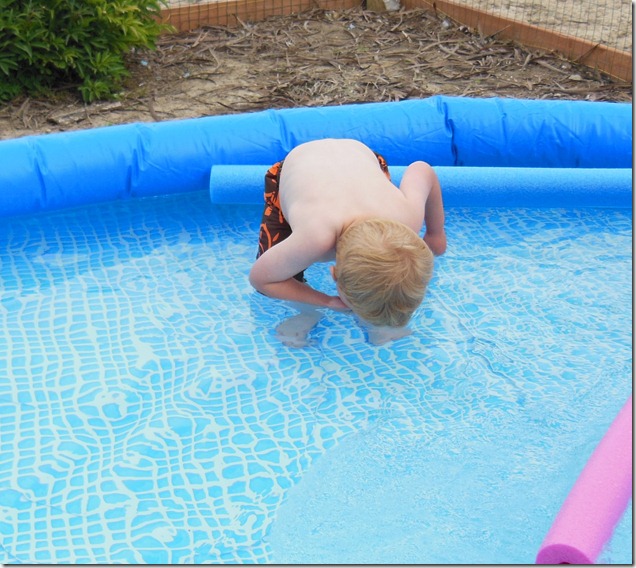 At about 7:30 I pronounced the pool finished.  It was just a few gallons of fill short of looking just like the picture, but it was pretty dang close.  The kids rode their noodles happily around and around.  Their teeth were chattering and their faces had taken on a slightly blue tinge that matched the color of the pool surprisingly well. 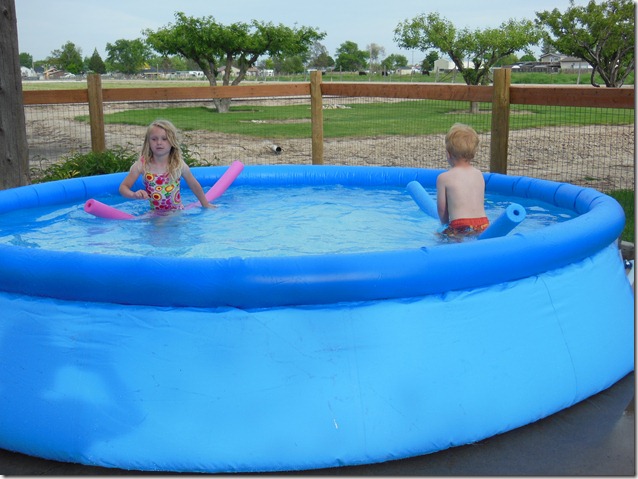 I told them to stand for a final picture and then we had to go in.  Batman was not ready to quit. 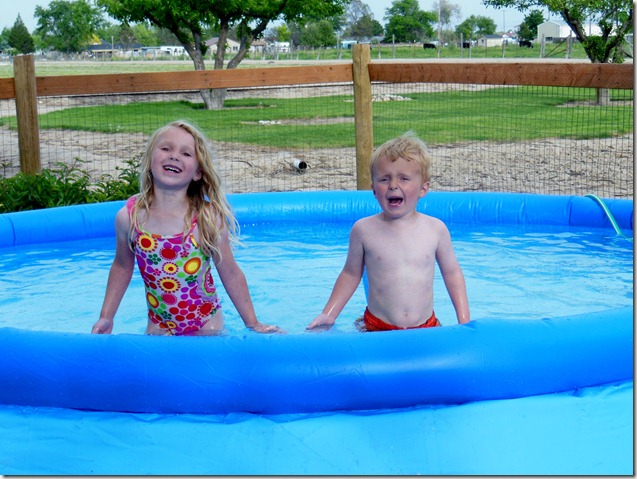 My newly minted four year old howled with displeasure.  He did not want to quit swimming, but mainly he did not want to leave the pool outside.  He had overheard DH and I discussing whether or not the maniac bird dog Winston would wreak some sort of puppy-havoc on our new toy overnight, and he thought we should take the pool down before we went to bed.

I finally convinced Batman that if Winston ruined the pool in some way we could get the dog a cage to live in and go buy a new pool while they were still on sale.  His wails slowly subsided to sniffles and I finally got him in the house and into a nice warm bath.

The kids slept remarkably well, and ran to check on the pool as soon as they awoke this morning.  Aside from a slight deflation of the top ring from the cold night air, and a little subsequent water loss, it was in great shape.

I think that for about the same price as a good bottle of champagne, this may be the best $49 we ever spent!

Categories: Kids Are Funny Creatures, Life in the Country | Leave a comment