Today has been three weeks since Desperate Hubby’s foot surgery, and we went back yesterday morning for a cast change and x-rays to see how everything was coming along.

DH is getting really tired of me taking pictures of him all the time, but as he is still on crutches and unable to catch me (barely) I was able to bring my camera along to document the occasion. 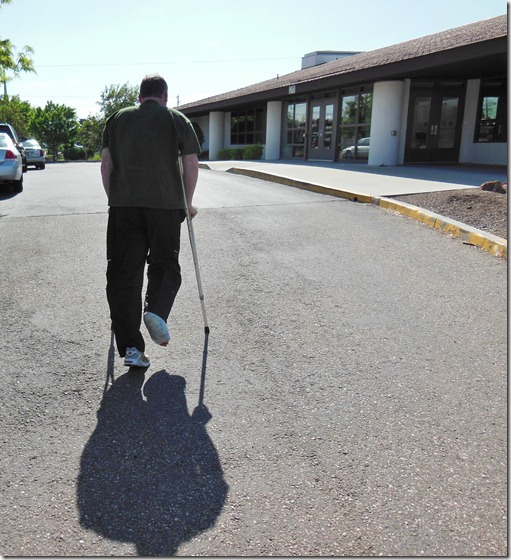 DH and I were both anxious to hear what Dr. Hirosi would have to say.  He has been feeling very well, experiencing little pain or swelling, and we hoped that was a good sign for his recovery.

We checked in and were taken right back to the cast change room, where we were greeted by Dr. Hirosi’s young protégé, Joe.  He and DH shook hands like old friends.  They seemed really happy to see each other, and I thought they might have hugged if I hadn’t been there. Just kidding.  Sorta.

After inquiring all about how DH had been getting along, with obvious and sincere interest, Joe went right to work cutting off the old cast.

He sawed down one side with what looked like a tiny electric pizza cutter (note:  awesome invention idea). 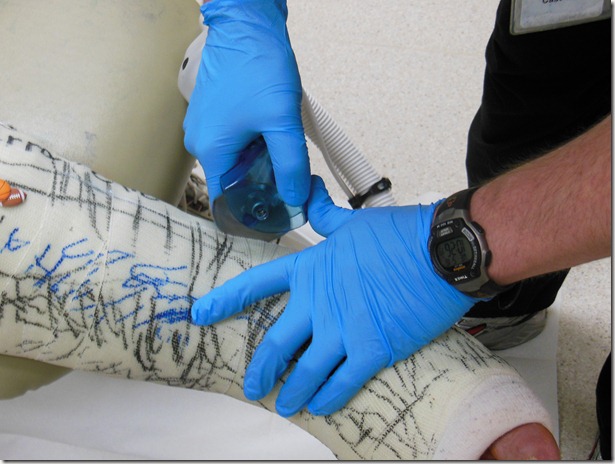 Then he cut down the other side.

DH said he could feel the vibration of the saw but no pain.

Next Joe cracked the cast open with something DH called a “rib cracker.”  He pulled apart the two pieces of the cast and dropped them on the floor, where they lay like the discarded husk of a cocoon.

Then he cut off all the cotton batting that had been cushioning DH’s foot and leg. When he started to take that off I steeled myself for the worst, relying on my journalistic professionalism (again, just kidding) to make me keep taking pictures.  DH had accidentally filled his cast with water two days ago in the shower, and I had visions of rotten green flesh falling off of the foot when it was unwrapped.

DH confessed his faux pas to Joe as the foot was unwrapped.  He also explained his emergency treatment procedure, which had involved taking my blow dryer and blowing air down the cast until it felt dry.

I admit I had kind of scoffed at this plan as it unfolded, but Joe was impressed.  He said that was exactly what he would have recommended be done.  Sometimes I don’t give DH enough credit.

At last the great reveal.  There was no gangrene to be seen.

The foot looked awesome.  Joe went right to work taking out the stitches.

I offered to take the stitches out myself to let Joe have a little break, since I had done it lots of times on horses.  For some reason DH rejected this suggestion without even giving it any consideration whatsoever.  He probably didn’t want to hurt Joe’s feelings.

Joe was fast and gentle with the stitches, and DH said he couldn’t feel a thing.  That made Joe laugh.  He said you’d be surprised at how many grown men are brought almost to tears by the stitch removal process.  Big babies.

When he was all done the foot looked like this.  Pretty good for a double joint fusion involving a complex metal plate and a bunch of screws, huh?

DH said it felt great to have his cast off, and Joe encouraged him to wiggle his ankle and toes as much as he wanted.

Next it was time to address the hip. Joe took off the large bandage that had covered DH’s bone marrow removal site for the past weeks.  We were interested to see what was under there.

This is what it was. The stitches in this incision were under the skin, so Joe just had to take off the tape covering the top.  He said this looked great too.

Next DH went down the hall to have his foot x-rayed.  We returned to the cast room and waited for the doctor to arrive.  He came in a minute or two later and we all looked at the x-rays on his phone.  Very impressive technology by the way.  Everything moved too quickly to take any pictures, but Dr. Hirosi pronounced the recovery to be right on track.  He was pleased with the healing so far, and genuinely happy that DH had managed the pain so well.

He prescribed lots of calcium, several minutes of sunshine each day, and limiting caffeine.  He said to come back in one month for another look.  If things looked good then there was a possibility that DH may get to have a boot instead of a cast, but he still would not be able to put any weight on the foot for a full month beyond that time.

I am pretty sure there is no boot in DH’s future.

Dr. Hirosi said goodbye, and then it was time to put a cast back on.

First Joe put a big socky thing over the foot and leg.

Then a few rolls of the cotton batting.  He said because there would no swelling to worry about this time he could make the cast a little smaller. 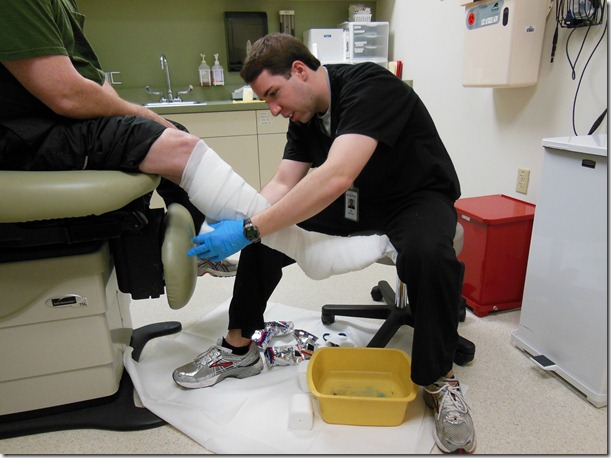 As he worked Joe told us that he would be leaving this fall to attend medical school at the University of Utah.  He was excited to have been granted admission there, and I could tell he was going to be a great doctor.  I told him so.

After more deliberation than you might expect DH chose the color of black for his cast.  Joe assured us that the kids could still write on it, using a sparkly silver or gold Sharpie.

Then he rolled it smoothly around the cotton batting. 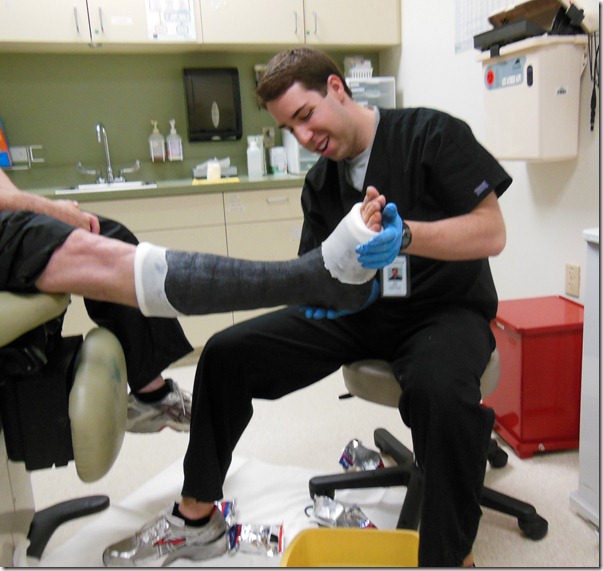 About midway through Joe realized that the cast was a little tight, so he gently removed DH’s smallest two toes to accommodate the tight space.

Ha!  Just seeing if you were paying attention.  I actually have no idea that he was doing with the scissors.  I crack myself up. 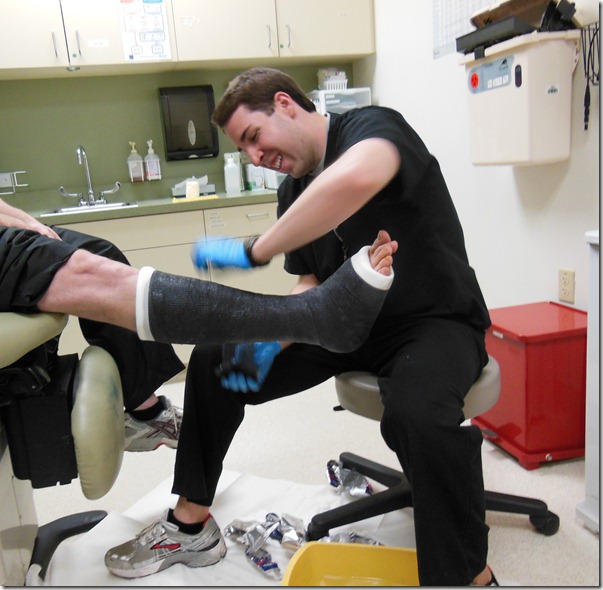 In no time at all we were finished and headed back home.  DH was happy with the comparatively slim line of his new cast, and we were both glad that the healing was right on track.

Categories: Life in the Country, Random Musings | Leave a comment