Traveling with a pack string through the wild lands of New Zealand was no small feat.  Although we had paid a significant amount of money for the privilege of riding these magnificent horses through some of the most beautiful country that God ever made, we were still required to help around camp.

Our riding counterpart Diane-From-Colorado was comfortable assisting with the kitchen-type duties, so she usually helped Jenny out in preparing and cleaning up after meals.

I was much more interested in the care of the eight horses that carried us and all of our stuff from camp to camp, so I naturally gravitated toward helping with the string.

If it wasn’t too cold when we got to camp, I washed the horses down with whatever water was available.  In this camp it was an icy cold stream.

Notice how the men are helping me in this instance.

And this one.  I think brother Rob was drinking a small cup of Jack Daniel’s.

Once the horses were unloaded and rinsed off, we turned them out to graze for the evening.  Once or twice we stayed in stations where there was a fenced pasture, but most nights we put up a large portable electric fence to contain them. 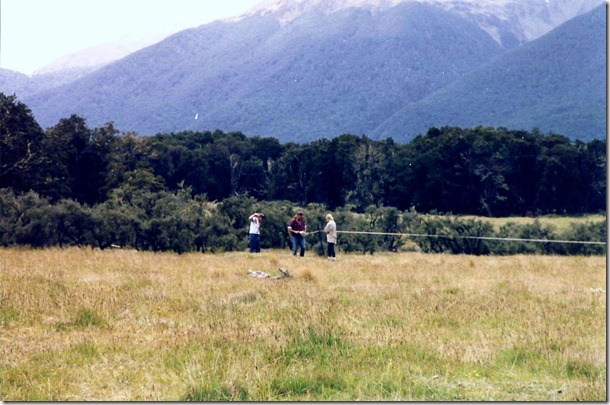 I tend to be an early riser, so as soon as I got up in the morning I would catch all the horses and tie them up, then get them all brushed off.

After they were brushed, I would lay out the tack and saddle the riding horses. 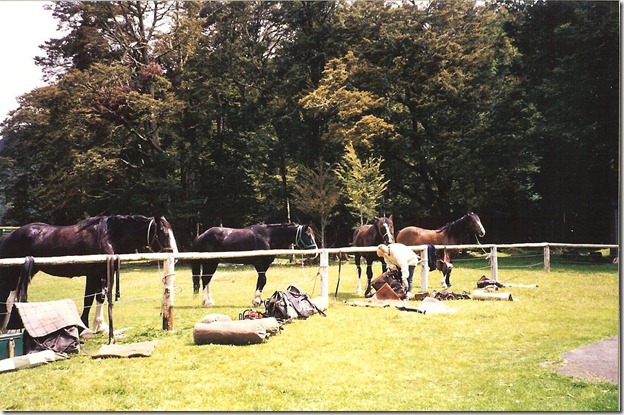 The saddling of the packhorses was generally handled by Rob and Lawrie, who would amble out and get started as soon as I got all the horses cleaned up.  Managing the pack saddles was actually a pretty technical activity, as each pack had to be weighed and balanced carefully to make sure it fit the pack horses properly and wouldn’t shift or make them sore.

A few days into our trip we were staying at “Dead Bird Station,” which wasn’t its real name but that was what I called it after we stayed there.  You will be horrified when I tell you why.

Anyway, at Dead Bird Station we had a rest day.  During the rest day instead of laying around and, oh, resting, Lawrie decided that he would ride the three year old Matia for the first time.  I thought that sounded like grand fun.  After a few days of dragging the spirited, half-wild black colt along behind me on the trail I was ready to see him get a little discipline and hopefully a dose of humility.

We all settled in on the fence for what was sure to be a good show.

Lawrie started out by sacking Matia out with a soft rope, desensitizing him to the feel of stuff touching him in unfamiliar places.  Matia wasn’t too impressed.

Next our fearless leader saddled Matia with a heavy pack containing a couple of bags of grain.  Matia thought quite poorly of this idea, and in the end he had to have his hind foot tied up off the ground so that his resistance was limited.

We left Matia to think about things while we went to eat lunch, then I helped Lawrie get him saddled in a regular saddle.  With some difficulty he finally got on the colt, who was getting madder by the minute. That’s when things got real interesting.

In fact, right after this photo was taken, though none of us captured it on film, the colt reared again.  Higher this time.  And Lawrie, the Real Man From Snowy River, simply stepped off the colt and pulled him over backwards. Literally pulled him over backwards. He accomplished this without stepping completely out of the saddle, so when the colt got back up Lawrie was still riding him.  I don’t know how he did that, but it was very impressive.

Finally the colt got tired enough that he sort of gave up, and Lawrie rode him around the pasture a few times. 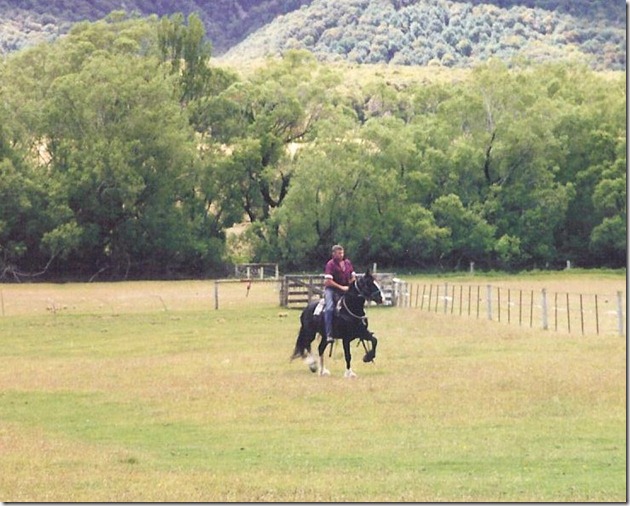 When they returned to fence where we were all sitting, we whooped and hollered, congratulating Lawrie on a good show.  I hopped down off the fence to go see if there was any wine left in box on the kitchen counter.

Lawrie had other ideas.

I’m not sure what possessed him to think I should be riding this wild young gelding, but he was insistent.  When he led me around at first it didn’t seem like that bad of an idea.

Then he turned me loose.

The colt bolted off, completely out of control.  My life flashed before my eyes.  Along with about a million other thoughts.  “There is no Life Flight here!” “Why is Rob laughing?” “Why am I doing this?” “Who will get my Porsche when I don’t return from this trip?” “What about my dog Bette?”  “Why is Lawrie laughing"?”

Eventually the colt and I settled down into a sort of understanding.  He slowed a little and let me guide him a bit around the big pasture.

Eventually I trotted and loped him around without any problems.  I was happy he was apparently tired of bucking by that time. 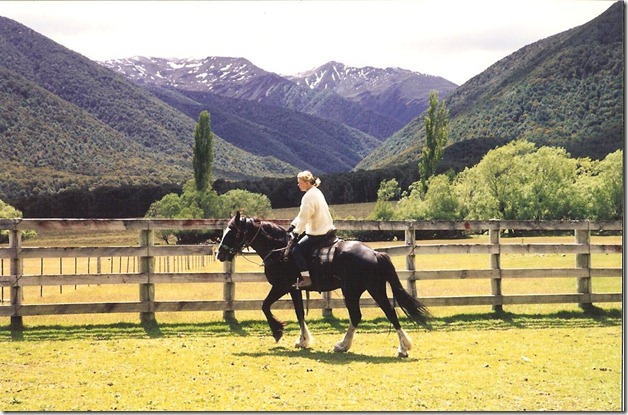 When we were finished I unsaddled the colt and turned him loose.  I was giddy with relief over having survived the ordeal.

Lawrie had apparently been testing me in some fashion (ya think?) because he set about trying to convince me in earnest to come work for him and Jenny in their business.  I still can’t believe I didn’t do that.

Next week I’ll give some more details about life on the trail, and tell you how brother Rob also had a near-death experience at Dead Bird Camp.