This past weekend the kids and I attended a “Planting Party” at our good friends Tom and Kari Points’ ranch in Middleton.  Tom and Kari had made a trip to the wine country of Washington a few days prior and picked up about 835 new Malbec plants to add to their small vineyard, for a total of 1000 vines on the picturesque south slope of their property.

I was pretty excited about going to the planting party.  You see, I had helped install the first allotment of around 170 plants last year, so I considered myself a seasoned veteran in the business of planting, and had a somewhat proprietary feeling about the grapes that we had already planted. It had been incredibly rewarding to finish our hard day’s labor and look down the neat rows of fledgling vines, dreaming of the cases of wine that would be the literal fruit of our labors.

I was even happier to help this year because the planting process had been expedited significantly by the convenience of trenches dug the length of each new row, eliminating the requirement of digging each individual hole like we did last year.

The kids and I got there a little after 10:00 am, and there were already several people there planting away. 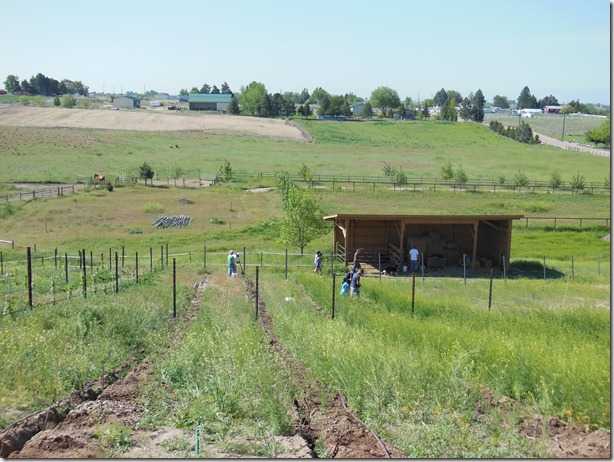 Tom had learned a lot from last year’s planting marathon, and he had pre-measured each row, putting a little orange tipped skewer at precisely each point where a plant should be interred.   The grapes were planted about five feet apart.

The plants had been shipped in a large wooden box buried in a rich wet black soil. 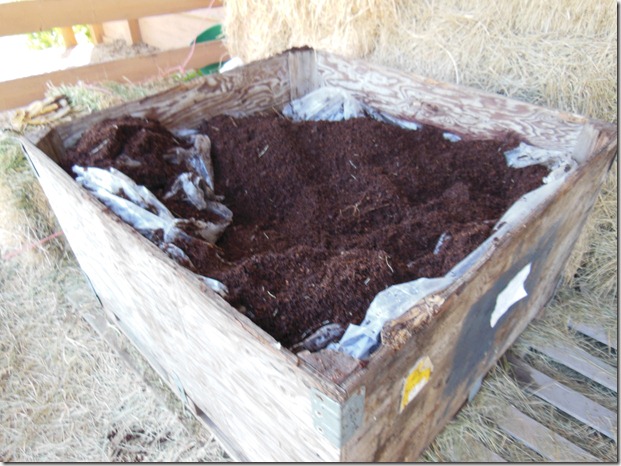 The vines were bundled into batches of 25 each, and Tom dug my first bundle out to get me started. 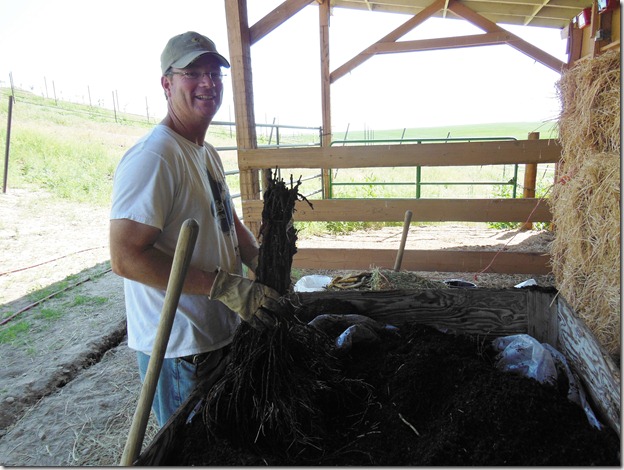 He put the bundle into a bucket and we set out up the hill.

I went to an empty row and got ready to go to work.

I watched Amy, Kari’s friend from the BLM and copied her technique.  First she loosened her target from the bundle.

Then she spread out the roots a little and put the plant at the proper height, placing it in the trench precisely where indicated by the little orange stick. 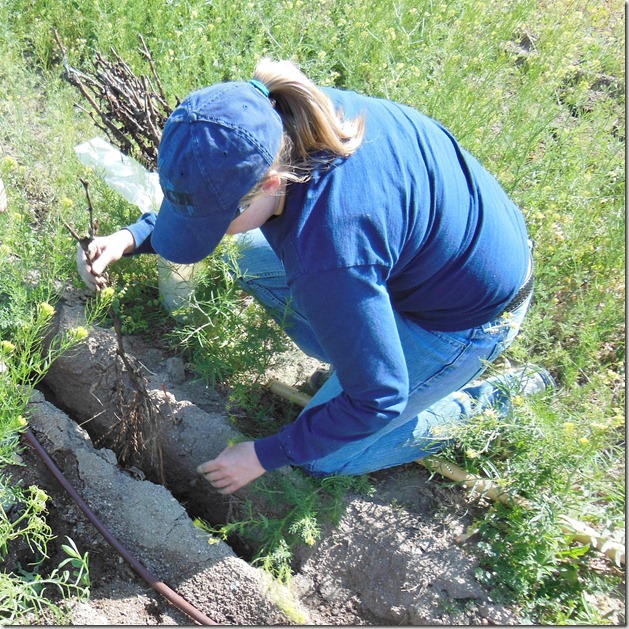 She squatted up and down as she prepared the dirt and got everything situated.

This would be a piece of cake.  No digging!  Just burying.  And no backfill.  All you had to do was get the roots of each plant covered with a little mound of dirt and you were set.  I couldn’t believe that I was getting a free lunch for this.

There were varying techniques exhibited by the different participants. 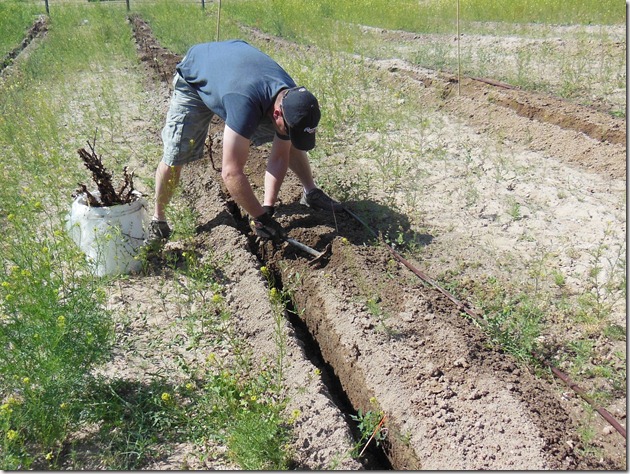 Some did a teamwork approach.

Batman came and helped me off and on as I toiled.  He spent more time squashing beetles and dissecting worms than planting, but he was still good company.

All the other kids played around the farm. The chickens were a big source of entertainment.  Until one accidentally died. 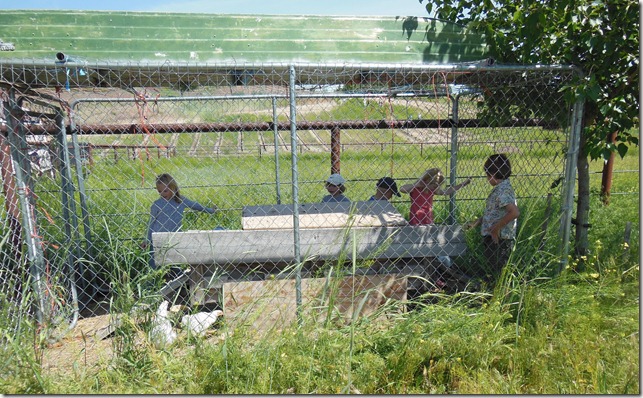 Actually it turned out to be only stunned, but I was proud of Annabelle.  She carried the (what she thought was dead) chicken all the way up to the house to see if it could be helped.  Kari put it in a dog crate and returned it to its friends, and the chicken was fine in a few hours. I’m not sure how it met its near demise.  I probably don’t want to know.

We finished planting at around 1:00.  Tom and Kari were so happy.  They put out a big lunch spread on their porch, and each person put their name on a cork to be put in a basket for a drawing.

I didn’t win any official door prizes but that was OK with me.  Kari gave me a bottle of wine to take home when I left.  She knows what keeps me coming back.

The kids had lots of fun playing.  Batman played on the swing set with Kade for a long time.

Of course, Annabelle had to ride Mae, Kade and Kampbell’s pony, since she doesn’t get enough riding at home.

And she and Kampbell went on a retrieval mission to get buckets of garden tools from the bottom of the hill. 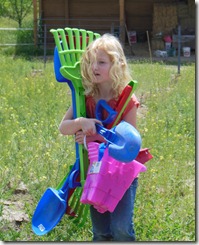 Zach had the most fun of the day sliding down the grassy slope on the side of the yard.  Of course, he kept his treat bag in hand so no one else would get it. 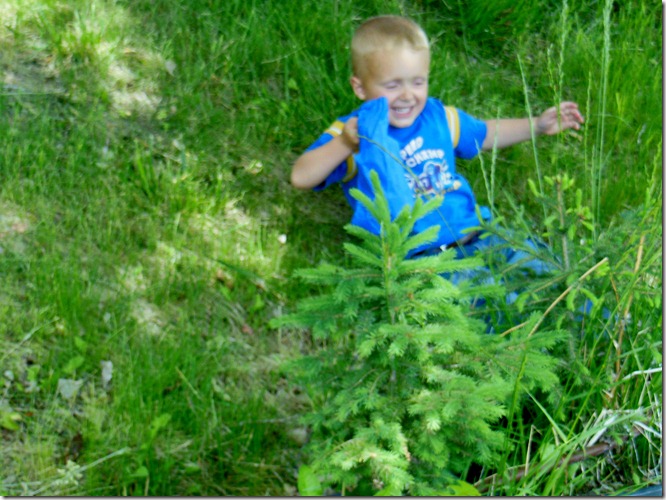 I checked out the plants that I had helped plant last year.  They were thriving nicely. 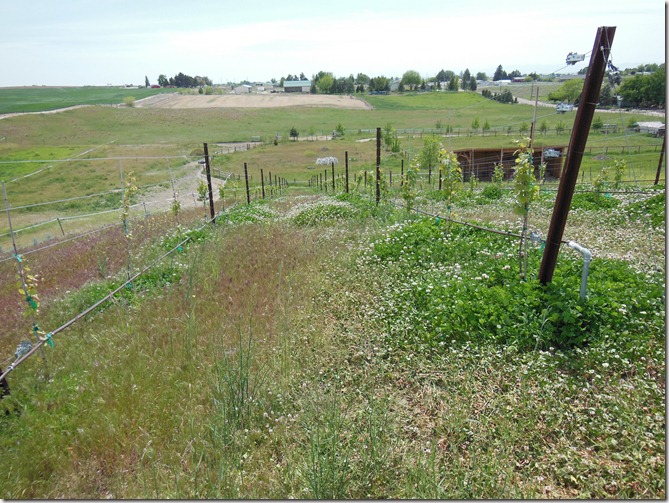 It takes four years before a vine is ready to harvest, and each plant will produce approximately two to three bottles of wine per harvest.  By my calculations, the 2 Points vineyard will produce about 2500 bottles of Malbec per year once it is up and running.  That is more than even I can drink.

It had been a beautiful day at the ranch.  The kids and I drove home tired but happy.  I marveled to Desperate Hubby how easy the day had gone, and talked of how all the other helpers just didn’t know how easy they had it, planting in pre-measured trenches.  I scoffed.  That wasn’t even real work.

Then I tried to get out of bed the next day.  As it turns out, planting grape starts, even in a pre-trenched vineyard, is an awful lot like doing squats.  As I had gone through four buckets of vines and about 100 plants, I figured that I had done approximately 400 to 600 squats during the afternoon of labor.  I winced with every step, and actually screamed out loud when Batman walked up behind me and gave me a hug on my legs.  Going up and down the one stair into our garage remains a special agony, and I dread standing up after being seated for any amount of time.  I am sure that in a foot race my crutch-ridden husband would not only beat me, but probably lap me.

Of course, my pain does not go unsung.  Just ask Desperate Hubby.

Turns out, grapes do make whine.