We had a momentous event this week.  On Wednesday night Annabelle and Batman had their first graduation program.  The kids just completed the 2011-2012 school year at their pre-school, Little Learners, and this week they and their ten little classmates received their first-ever diplomas.

Annabelle will be attending kindergarten next year, and we were thrilled to find out this week that she got into the highly coveted new charter school located just a half mile from our front door. If I can behave myself enough to not get her kicked out, she will start her formal (bi-lingual, classical) education in late August.  Batman will actually return to Little Learner’s next year, but since he completed the graduation requirements like the other kids he got to go through the ceremony just the same.

The first battle was one of attire.  One might assume that it would be harder to dress a little girl, but Annabelle’s only requirement was that she wore a pink dress.  Since they had the perfect size right there at our nearby Costco we were set.

Batman, on the other hand, was a little tougher.  His requirement was that he wear a shirt with a picture on the front.  Of Batman.  He got a few new Batman t-shirts (actually pajamas) for his recent birthday, and brooked no discussion about any other clothing options.  I enlisted the help of Miss Torrie, his pre-school teacher, to help with the dilemma.  Miss Torrie didn’t really care what he wore, but she did indicate that most kids would likely be a little more dressed up than Batman pajamas.

I finally solved the problem by suggesting that Batman wear cowboy clothes.  To him, that means anything purchased at D&B.  That seemed acceptable to my little diva-man, so we set off on a shopping excursion.  The first problem with the new plan arose when we walked into D&B and the first article of children’s clothing he saw was a little boy’s t-shirt with a large picture of a bull on the front.  You can guess what happened next.

Fortunately, they did not have the bull shirt in Batman’s size, and I finally talked him into a regular shirt to match his new belt.  Then I had to buy him new cowboy boots since his former boots were last worn in the swamp at Eagle Island, and they haven’t ever really recovered.  It wasn’t the cheapest pre-school graduation outfit in the history of man, but at least we got it handled.

When it was all said and done I thought they cleaned up pretty well.

Miss Torrie had rented the ballroom at the local Best Western for the event, and she did herself proud with the decorations and refreshments.  She even had a custom cake made for the occasion.

And even a stage.  There were no alcoholic beverages served at the party, but you can’t tell it from some of my pictures. Sheez!

The kids were thrilled that two of their older sissies (and one boyfriend too) were able to come to the ceremony. 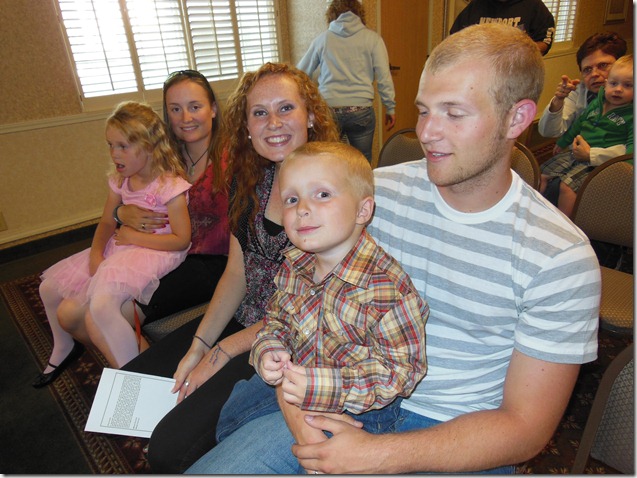 Their grandpa and grandma Becki and Elliott, adopted grandma and grandpa Kay and Vernon, and aunt and uncle Doug and Melody all came to watch as well.  Desperate Hubby opted to stay home because his foot was hurting and he didn’t think he’d be able to sit with it on the ground for that long.  He missed out.

The kids watched avidly as final preparations were made of the stage. 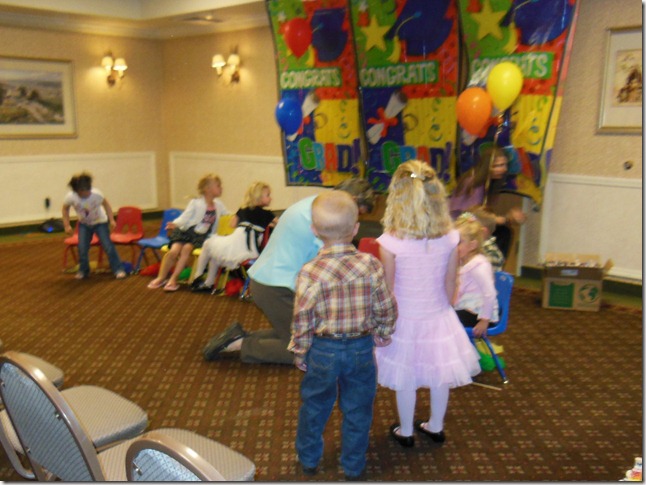 Things got started with Miss Torrie giving everyone a warm welcome.  She is an amazing teacher and a wonderful person, and we consider ourselves so lucky to have her in our lives. 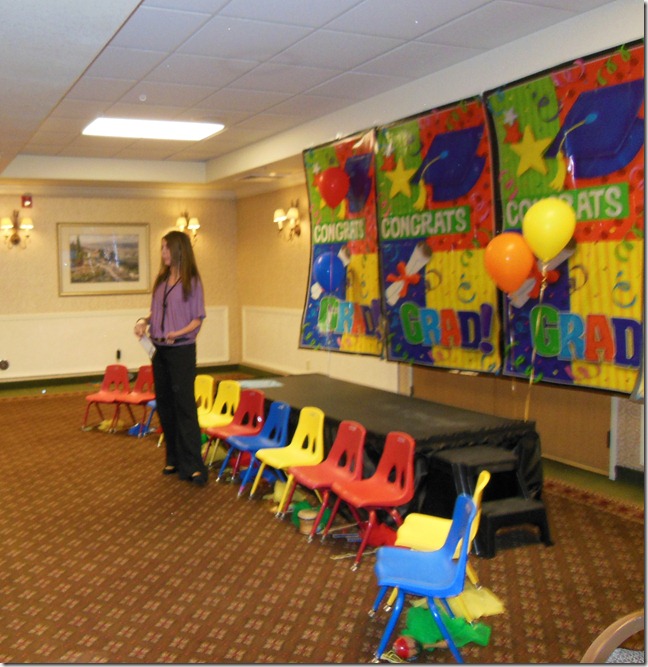 The kids filed in and took their assigned seats.  First they all stood, one by one, and introduced themselves to the audience.  Annabelle stood and said her name loudly and clearly so everyone could hear.  Batman stood up and smiled.  And smiled. And fidgeted.  And smiled.  Miss Torrie prompted him “My name is…….”  He smiled.  Finally Miss Torrie said his name for him and he sat down with evident relief.

The class performed a darling musical program where they all sang and danced and played a variety of musical instruments. It was super cute.

The music portion of the program lasted about thirty minutes or so, and then Miss Torrie handed out the diplomas.  Each child walked to the stage in cap and gown to the music of “Pomp and Circumstance” and was handed their diploma.  It was all very grown up and official.

Didn’t I tell you Miss Torrie is awesome? 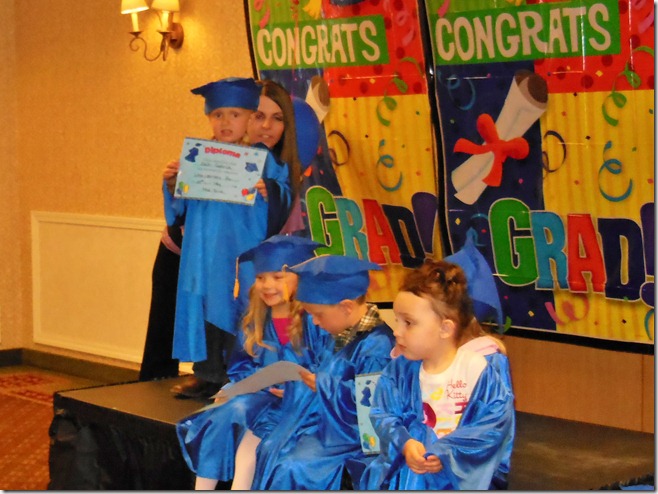 Both kids stood proudly with their first diplomas.

And then gave me some pretty goofy close-ups.

Told you they were goofy.

After the ceremony we all had cake and sparkling lemonade.  It was a fun and entertaining evening.

Did I say that Miss Torrie is my idol?

Categories: Kids Are Funny Creatures, Life in the Country | 5 Comments

5 thoughts on “Our First Graduation”