Batman and the Big Slide

Posted on June 4, 2012 by A Desperate Horsewife

We were thrilled to be invited to a birthday party this past weekend by one of the kids’ former pre-school peers, J.  It was J’s sixth birthday, and his party was to be held at the Monkey Bizness Play Place in Boise.  We were excited both because we would see several old friends at the party, and also because we had heard much about how fun Monkey Bizness was.  In the funny way that timing works, it was coincidentally also Monkey Bizness’ last day in “bizness,” so we were glad we would get to experience it once before it went away.

The first hour of the party was in a private section of Monkey Bizness, separated off from where the public could access the attractions.  Our private room was absolutely dominated by a HUGE inflatable slide.  I am not great at estimating heights, but I would say the top of the slide was a good two stories in the air, if not taller.

Annabelle immediately ran right to the slide and began sliding down, over and over again, laughing hysterically.  She went so fast on the super-tall slide that she was a literal blur as I tried to photograph her.

At the bottom she was all smiles and breathless delight. 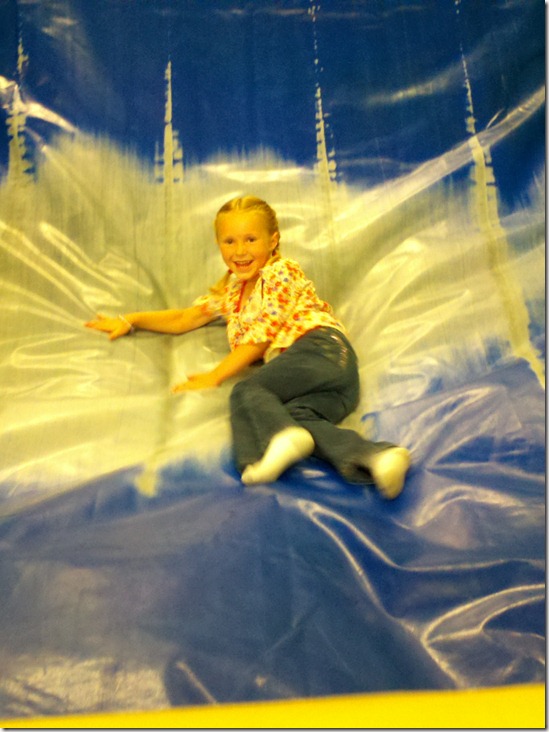 Batman, on the other hand, took a more conservative approach.  He started out by playing in the little kids climbing area which was filled with small, unintimidating inflatable obstacles.  He was the only kid playing in that area but he didn’t mind.

As long as I stayed close.

He gradually progressed to a smaller slide in an adjoining area, where he practiced sliding down by himself over and over.

I wanted to watch Annabelle play too, so I eventually persuaded him to join me and give the big slide a try.  It was with great reservation that he agreed to my request, but he finally did and began the climb up to the launching area.  I admit he did look pretty tiny as he got to the top of the giant slide. 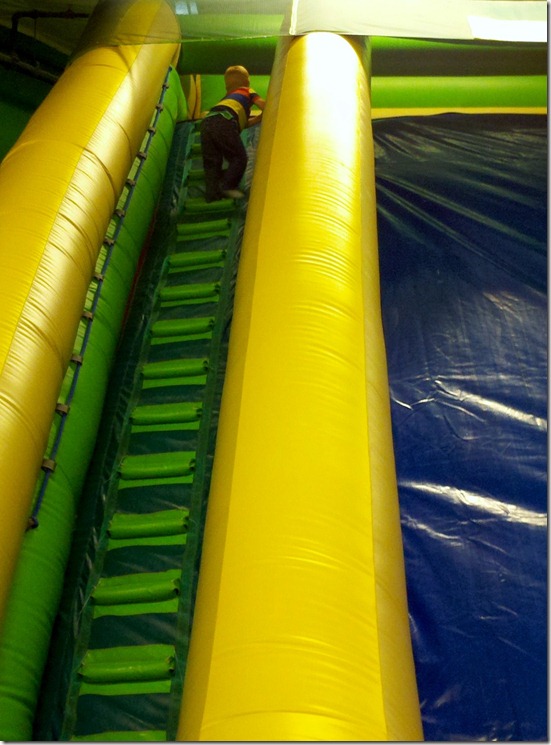 See, I told you Annabelle was a blur.  She sort of looks like a ghost sliding.  Kind of freaks me out, actually.  But she was real. I was there. 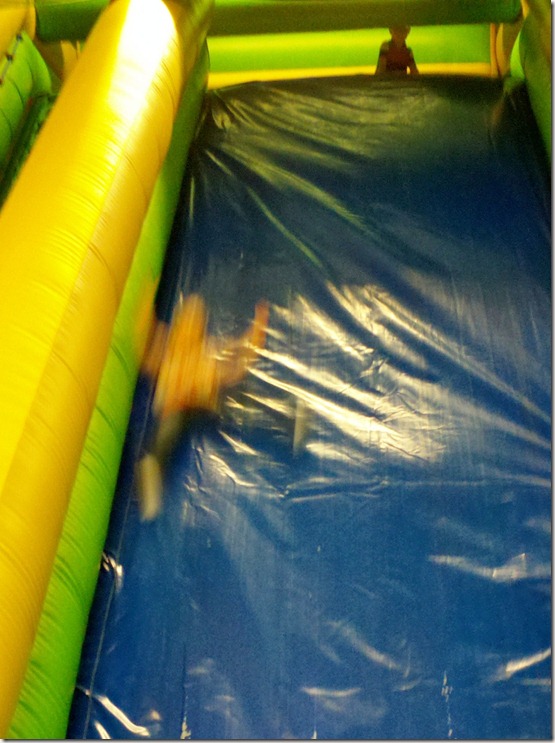 Batman refused to listen to me or any of the other parents at the bottom of the slide as we urged him to come on down.

He did tease us from time to time by dangling his body halfway over the edge, and then scooting back up to the top at the last possible second. 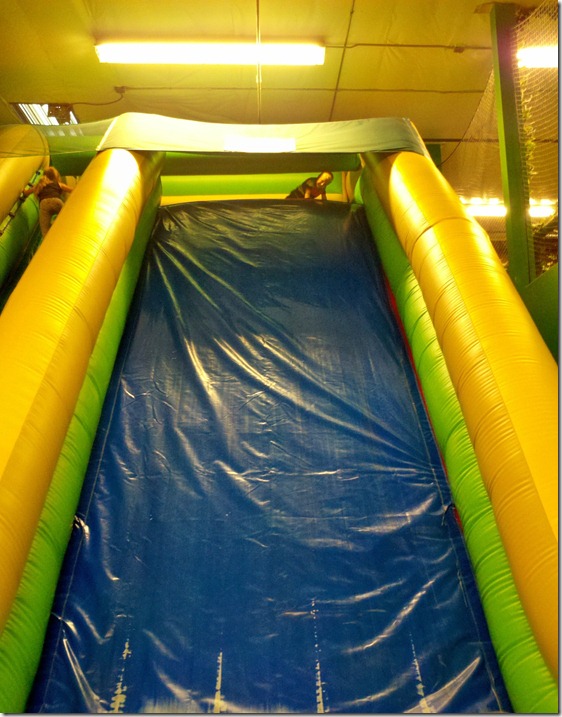 I was sure he would go too far one time and end up sliding down accidentally.  But he didn’t.  He just stayed up there.

For the entire party.

At one point he did come down temporarily, but not by sliding on the big slide.  He bounced down the steps on the climbing rail, which looked pretty uncomfortable to me. 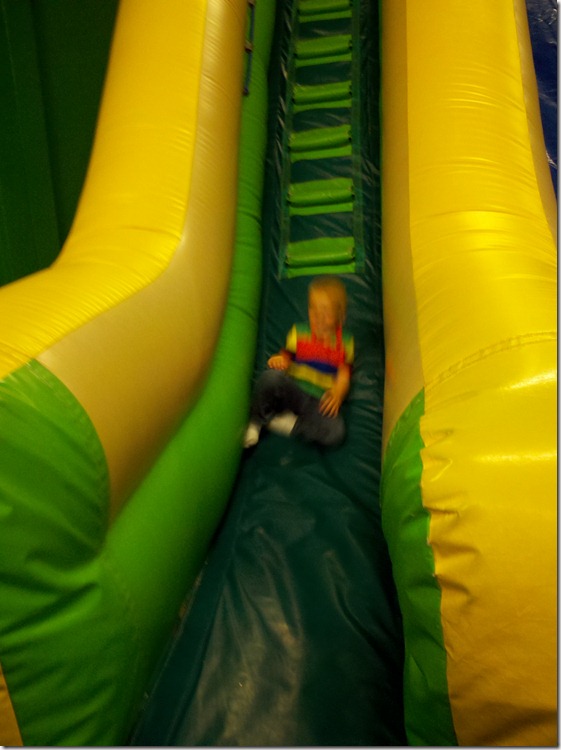 Then he tried to climb UP the slide. That didn’t work out very well.

So he climbed back up the stairs to the top and sat down again.  Until our time in the private party room was over.

All the other kids merrily hustled into the adjoining private room to get ready for cake.  But Batman just sat there.  We were the only ones left in the private play room, and the next party of kids was lined up outside the door waiting to come in.

I implored Batman to come down.  He shook his head.  I told him he had to climb down the stairs. He said no. I told him he would miss the cake.  He said he didn’t care.

So I did what any reasonable mother would do under the circumstances.

I knew as soon as I started to walk away toward the cake room that Batman would go over and hustle down the stairs like he did before, so he wouldn’t be left behind.  Batman is by any estimation quite herd-bound.

After I stepped off the platform to leave I glanced over my right shoulder to see if my strategy was working.  Just in time to see Batman launch himself off the top and slide to the bottom with squeals of laughter.

I was so surprised that I did not get even a blurry picture of his big adventure.  When he got to the bottom he immediately began lobbying to do it again.

I had to practically drag him to the cake room to join the other kids. 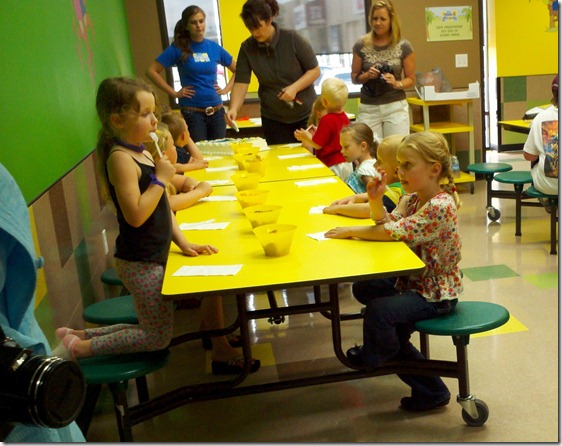 We had some delicious cake and sang “Happy Birthday” to J.

Then he opened his presents.

Is he cute or what?

We had a wonderful time at the party and loved seeing all the kids (and parents).

Batman talked non-stop all the way home about going down the big slide again.

I didn’t have the heart to tell him the big slide was no more.