Posted on June 7, 2012 by A Desperate Horsewife

I signed the kids up for a couple of summer programs through the Caldwell Rec Department this year.  One is our usual round of swimming lessons, which we start a little later this month.  A new program for them this summer is Short Sports, a weekly class held at the Caldwell Park for kids between the ages of 4 and 6, where the kids get to play one team sport a week during their hour long session.

The kids have been looking forward to the class, and I have too.  Although we spend a lot of time together doing a variety of activities, the kids haven’t yet participated in any organized team sport, and I was anxious to see what they would think of the whole experience.

I, of course, had a pre-conceived notion about how the day would go.

Since the moment he could walk, Batman has exhibited a profound love of playing with any kind of ball.  I have pictures of him at the age of one, wearing a diaper and playing basketball in the kitchen of our old house with a little plastic basketball hoop.  His hand-eye coordination has always been very well developed for a kid his age, so much so that it has often been commented on by anyone who watches him perform any athletic maneuver. He can throw a baseball in the air and hit it with a bat; he has been able to catch a ball since before he could walk; and throws a ball hard enough that I can rarely catch it.

OK I hear anyone who has ever met me snickering.  I know I can rarely catch any ball, but Batman throws really hard.  Truly.

Annabelle, on the other hand, doesn’t mind playing ball, but she doesn’t seek it out either.  She will throw a ball back and forth with her brother for a bit, then gets bored and heads out to play with the dogs or the horses.  She reminds me of myself at her age.  Batman plays with the dedicated single-mindedness he shows anything he is truly interested in.  He will literally play for hours, practicing the same maneuver over and over again.  It is something to watch.

So, when we arrived at Short Sports I was expecting Batman to really be in his element, and Annabelle to be more interested in the social aspect than the actual activity.

The first event of the day was to get their official t-shirts issued. Being contrarians they had to choose opposite colors.

Then they sat down for the team meeting held by their instructor, Troy.

The first activity was a passing drill.  The kids had to choose partners and pass the ball back and forth.  Of course they chose each other as partners, and soon were lined up for the task.

At first Batman stopped the ball by throwing himself on it rugby-style every time his sister kicked it to him.  You can see him in the position as he waits for the ball. 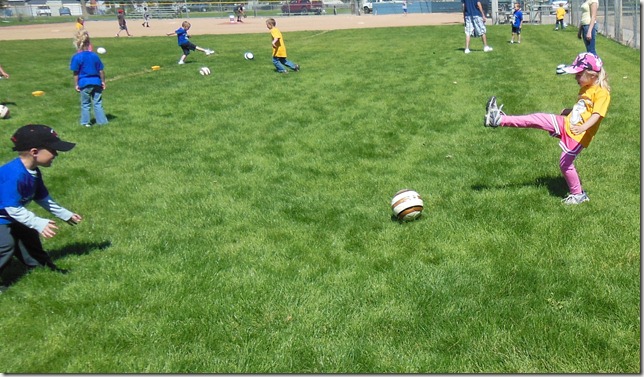 Finally the instructor came and showed him how to stop the ball with his foot and pass it back.  Then he was in business.  He kicked and kicked, a big smile on his face the whole time.

The next event was a dribbling drill, where the kids were put into teams of three and had to take turns dribbling the ball down the field and bringing it back. This time Batman and his sister were on different teams, but they were comfortable by then and didn’t mind at all. 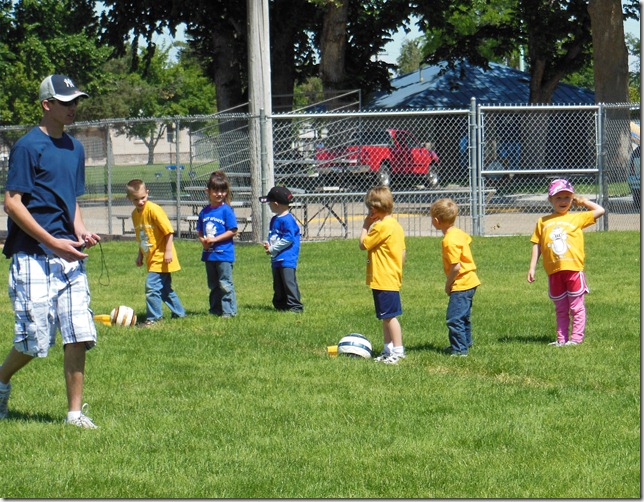 After a couple of practice runs, the teams raced to see who could get the ball back and forth the fastest.

The other boys on Annabelle’s team had both played soccer before, and they totally got the concept of winning.  They encouraged her along by cheering and yelling, and their team won both rounds of competition.

Batman had one teammate who had played soccer before, and he also wanted to win. He wasn’t quite as kind in his encouragement though.  I saw him talking earnestly with my little boy, then grasping him by the shoulders and shaking him.  Not too hard.  But shaking him.  Batman just ignored him.

Their team did well too, coming in a close second to Annabelle’s team in both races.

Finally the last event arrived.  A real game.  The coaches separated the kids by their t-shirt colors, so once again Batman and Annabelle were competitors.  When the kick-off came the kids went at it in fierce competition.

I think the coach kind of assumed that all the kids knew how to play soccer, but having never played before, mine didn’t really grasp the idea of getting the ball into the opponent’s net at first.  Annabelle addressed this confusion by aggressively chasing the ball up and down the field, and kicking it as hard as she could in any direction possible.  Batman, on the other hand, just stood back and watched.  He was trying to figure out what the object was before he jumped in.

Annabelle had a few good runs with the ball.  None of them were necessarily toward the goal, but she played hard and fast the whole game.  She threw herself on the ground, ran, jumped and kicked with the best of them.

Batman followed along with the other players for most of the game.  He stayed in the middle of the pack and didn’t try to get too close to the ball.  Finally, at the very end of the game it appeared that a light came on for him.  He stole the ball and headed toward the goal.

He kicked it hard and he ran fast.  Right out of bounds.  And then the game was over.

As we left the park, Annabelle was jubilant. The assistant coach congratulated her on her aggressive playing style and told her that she remind her of herself when she was young.  She was flushed and sweating, and breathlessly recounted all the details of her efforts in the game.

Batman was morose.  “Mom,” he said, “I didn’t get to score a goal.  I wanted to win. Why did we have to stop?”  I told him he did just great and I was proud of how he had improved throughout the game.  I asked him if he would be interested in playing soccer on a real team next fall.

He said he’d think about it.