Desperate Hubby Gets the Boot

Yesterday was Desperate Hubby’s second re-check appointment with the surgeon following his foot double-joint fusion surgery in April.  He was excited to go to the appointment, since he is now seven weeks into his twelve week recovery, and he was hopeful he might be given a boot to wear this time rather than another cast.

I remained skeptical.  After the boot had been mentioned in the last appointment, DH has asked some ill-advised questions about exercise options for the foot should he be given a boot this time.  I didn’t feel that Dr. Hirosi would trust him with a boot.

We got the the appointment bright and early.  DH crutched it into the office, hoping it would be his last trek carrying a heavy cast. 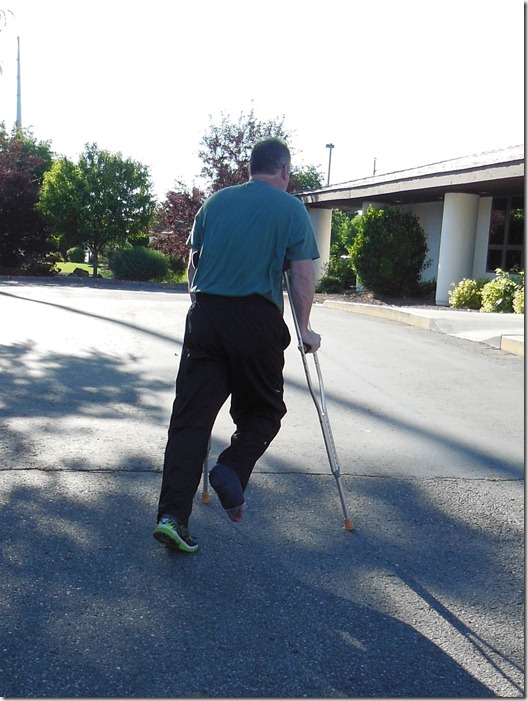 Once he checked in he entertained himself with some light reading.  I didn’t make any sarcastic comments about his choice of magazine.  Believe me? 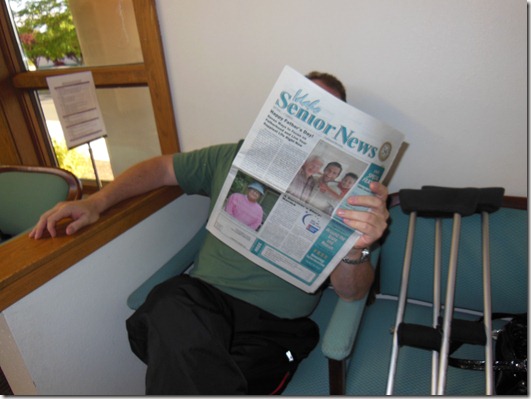 We were quickly called back into the cast room by DH’s boy-crush Joe, who went right to work cutting the cast off.

When he peeled back the batting the leg looked remarkably normal, except for lots of scaly, peeling skin from being covered for so long.

The incision looked nice and clean, and most of the bruising was gone. 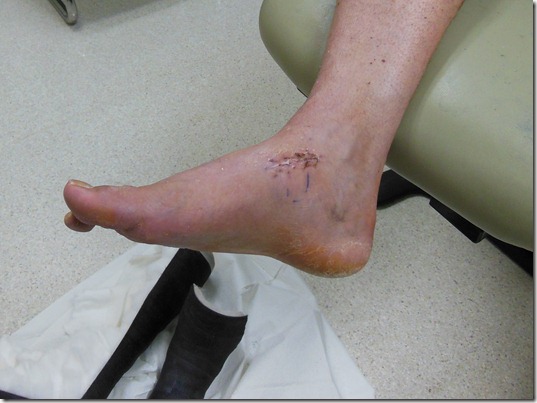 Once the cast was off, we hopped on over to the x-ray room.  I took the opportunity to shoot a few photos of DH’s legs side by side while we waited.  Guess which leg has been the sole support of 200+ pounds for the last seven weeks?

Once the x-rays were completed we went on back to the cast room where Dr. Hirosi joined us.   He expressed complete amazement over DH’s continued lack of pain, and did a careful physical exam of the leg.

I think my camera surprised the good doctor a little, but he was a very good sport about it.

After the physical exam, Dr. Hirosi showed us the x-rays on his phone.  I just think this is the coolest technology.

He showed us that the white filled-in area around the surgical site meant that the bone graft was growing just as he had hoped.  He also said the the fact DH’s heel was turning a lighter shade of white meant that DH had been following instructions and not putting weight on the foot.  The lighter bone mass signified a loss of bone density, which in this case is to be expected. That was interesting.

After he finished going over the x-rays he took a moment to explain the options.

He said that he would prefer to recast the foot for safety reasons (I take this as a victory in my pre-appointment prediction) but that since DH had expressed some discomfort during the doctor’s earlier palpation of the calf muscle, an ultrasound was needed to rule out a blood clot.

Because DH could not leave the office with nothing on his foot, and the hospital obviously could not ultrasound through a cast, that left no option other than a boot for DH.  Dr. Hirosi made DH pinky swear he would put absolutely no weight at all on the foot for five more weeks.

OK, he didn’t really make him pinky swear, but he was pretty adamant about it.

So then Joe fitted a cool hi-tech boot on DH’s foot and leg.  The boot was made primarily out of Velcro.

DH was excited about the boot at first.  He had thought he would be able to take it off to shower and to sleep.  Joe told him he could take it off to shower or to sit in his recliner when he was awake, but he could not sleep with it off.  There was too much chance of turning the foot in his sleep and causing damage to the graft.

The ultrasound later in the afternoon showed no evidence of a blood clot, so DH got to head home for five more weeks of recovery.

So far DH is not that thrilled with the boot.  Sleeping in it was difficult, because the Velcro kept catching on the covers when he tried to turn over in bed.  The boot is a tighter fit than the cast was, so it’s not very comfortable in that regard either.  The only good thing was that he enjoyed being able to wash his leg and foot in the shower this morning for the first time in almost two months.