Swimming Lessons 2012, Round One

Posted on July 1, 2012 by A Desperate Horsewife

Annabelle and Zachary have just finished up their first round of swimming lessons for the 2012 summer season.  We are once again doing our lessons at the Caldwell Municipal Pool through the Caldwell Parks and Rec Department. The kids love swimming in the outside pool, and I have found the staff to be unfailingly cheerful, professional and well-trained in their duties.

The lessons last for two weeks, and the kids go Monday through Friday for a half-hour each day.  The first day of lessons this year was kind of on the chilly side, and the kids sat huddled on the green steps waiting to meet their instructor.

Their teacher this session was Hannah, a college student from the University of Idaho, who combined the perfect mix of fun and education for the pre-school class.   Hannah was absolutely adorable, and the kids just loved her.  It was obvious that she truly enjoyed her job.

Every day started out the same. The kids would sit on the steps of the kiddie pool waiting for Hannah to come and tell them to get in the water.

The first few minutes of each day would be spent playing “animals” while walking/running back and forth across the pool.  Each kid would take turns picking an animal, and all the other kids would make the noises and hand motions of that animal while crossing the pool.  This was the time for much hilarity and horseplay in the pool, but Hannah kept everybody on track and moving along.

We discovered right from the beginning that Batman’s ultra-sensitive eyes didn’t handle the chlorine very well.  I have tons of pictures of him doing just this.

After a couple of days I broke down and bought both kids a pair of goggles at Walgreens. 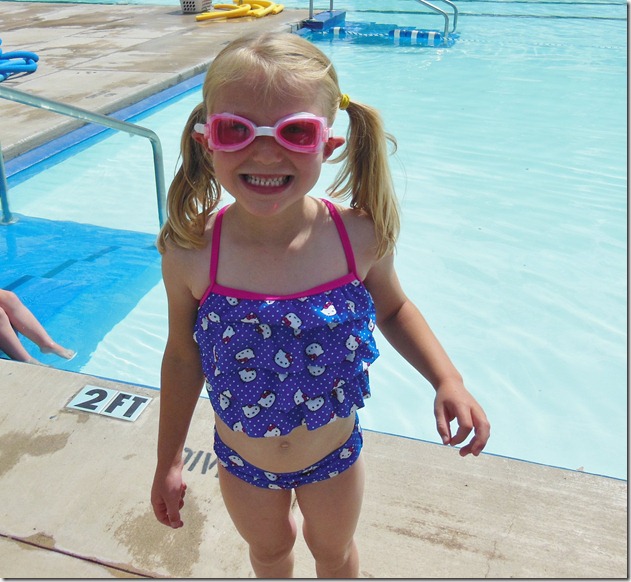 Each day had a new type of activity designed to get the kids comfortable and having fun in the water.  Several days they got to go down the big yellow slide at the end of the lesson.  Annabelle particularly loved this.

Batman was a little slower to warm up to the slide. In case you haven’t met him or read this blog before, Batman is a very methodical thinker.  He likes to analyze everything before he (literally or figuratively) jumps in.

The kids had lots of fun on “Noodle Day.”  Hannah gave each kid in the class a noodle “floatie” and instructions on how to hold them in the water.

The kids tried their noodles out in the little pool for a while first.  Then Hannah hooked all the kids together by having them hang on to the noodle in front of them, and she towed them over to the deeper water.

She lined them all up on the side of the pool.

And they each practiced their floating.

After everyone got to do a front- and a back-float, Hannah set them all up on the side of the pool and they jumped in, one-by-one.

Guess who waited until last? 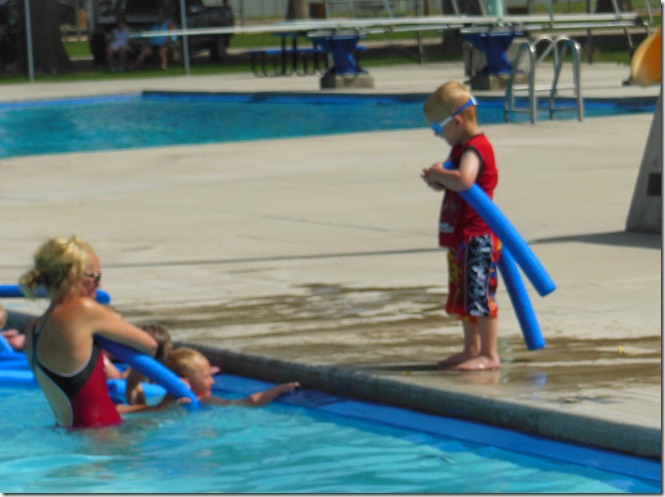 Another fun day was “Life-Jacket” day.  All the kids were fitted with a life-jacket for the lesson.  Batman was thrilled beyond belief that he got a Scooby Doo vest.

Annabelle got a blue jacket that matched her Hello Kitty two-piece swimsuit.

The kids had lots of fun floating all around the little pool.

And then they formed a chain and Hannah pulled them around in the deep water. 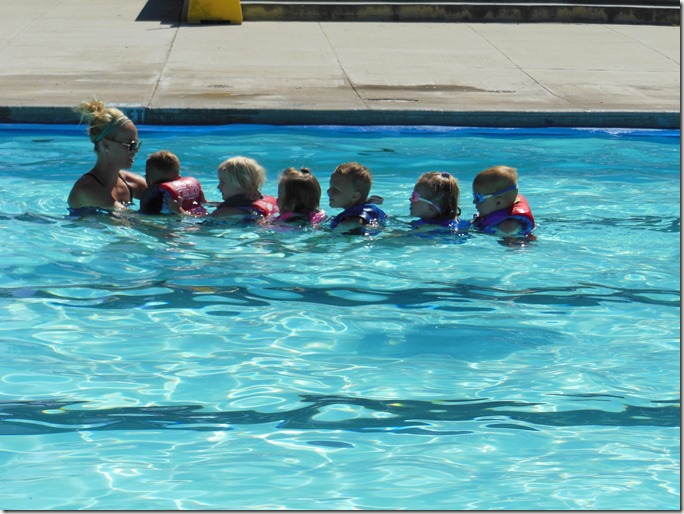 Batman loved life-jacket day, and he was the last one to reluctantly take off his Scooby Doo flotation device.

Mid-way through the second week of swim lessons Annabelle experienced a BIG EVENT. She lost her first tooth.

All she could talk about was going to swimming lessons the next day to show Miss Hannah.

The highlight of the two weeks was definitely “High-Dive” day.  On “High-Dive” day each kid jumps off the end of the diving board into the waiting arms of the instructor below.

Last year both kids had to be lifted up and dropped off the edge of the diving board, but not this year.  Annabelle went right out and jumped off into Hannah’s waiting arms. 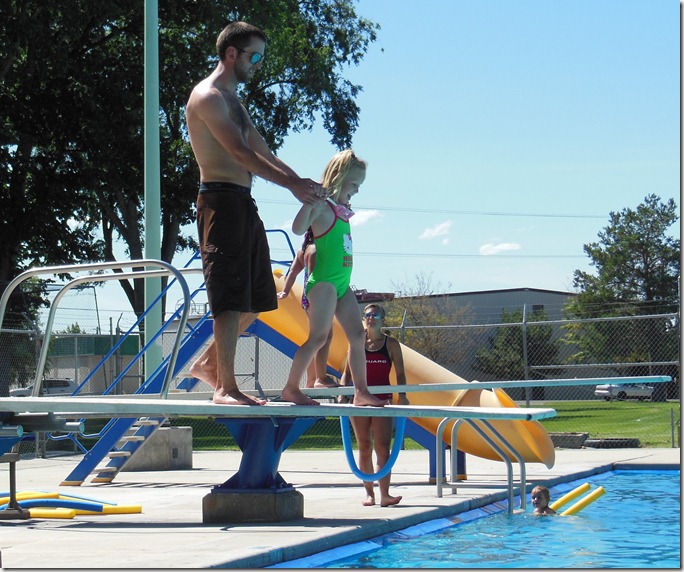 She landed with a huge splash and swam with Hannah to the side with a big smile on her face.  As soon as she climbed out on the stairs she said “I want to go again!” and rushed back to the end of the line.

Where she stood all atwitter with excitement over her next jump.

Batman was a little more cautious.  He stayed at the end of the line for quite a while, and several kids jumped twice before he finally got up the nerve to get on the board. 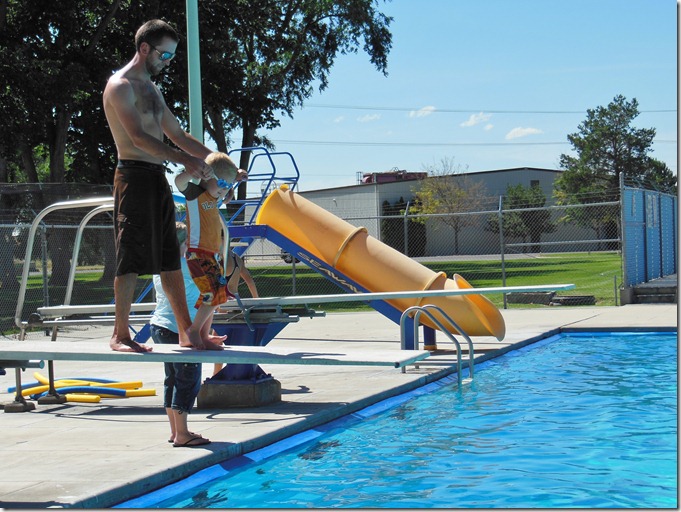 I almost thought he’d have to be dropped in again this year, but at the last moment he took a big breath and jumped right off.  I was so proud of him.

His reaction afterwards was a little different from his sister’s, though.  He climbed up the stairs and walked over to where I was sitting on the side of the pool.  “I’m not going again!” he said with a definite tone to his voice.

We sat together and watched as all his little classmates jumped again and again.  His sister jumped two or three more times before Batman finally decided he’d try it once more.  He walked back to the end of the line, his swim trunks a little askew from his initial jump.

And at the back of the line he stayed.  As each child circled around from their jump, Batman just backed up a little and let them get in front of him. 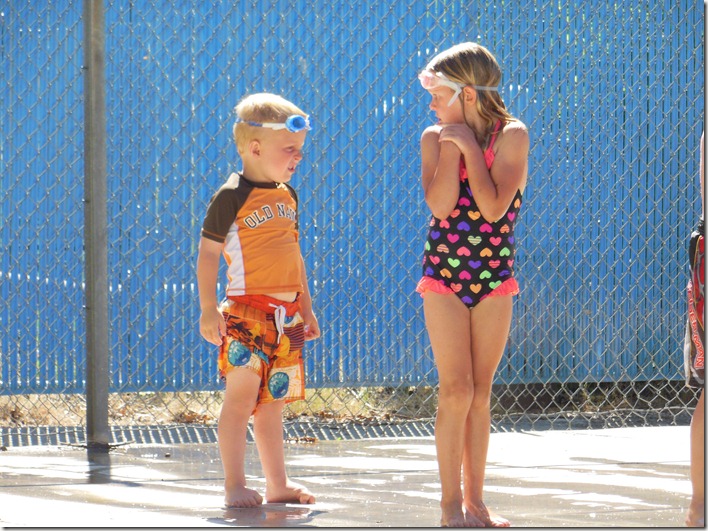 He finally did make it to the front of the line, and he jumped one more time.  I was even more proud of him the second time.

There was one place the Batman really excelled in the pool, and it was the area of dunking.  For the first several days, because of his problem with the chlorine in his eyes, Batman was reluctant to put his head under the water when the kids were practicing blowing bubbles or dunking.

But once he got it, he got it.

And that’s all he wanted to do. While the other kids were practicing floating or being animals across the pool, Batman dunked.

Hannah often had to call him back to join the others, because he would get so pre-occupied with diving down under the water.

The two weeks flew by, and before we knew it the last day of the session arrived.

The final day of lessons is the much heralded “Play Day.”  The pool is filled with a plethora of toys, including squirt guns, floaties and diving rings.  The kids are allowed to have a free-for-all for the entire lesson.

They had a blast!

I wasn’t in the pool but I think I had just as much fun watching them. 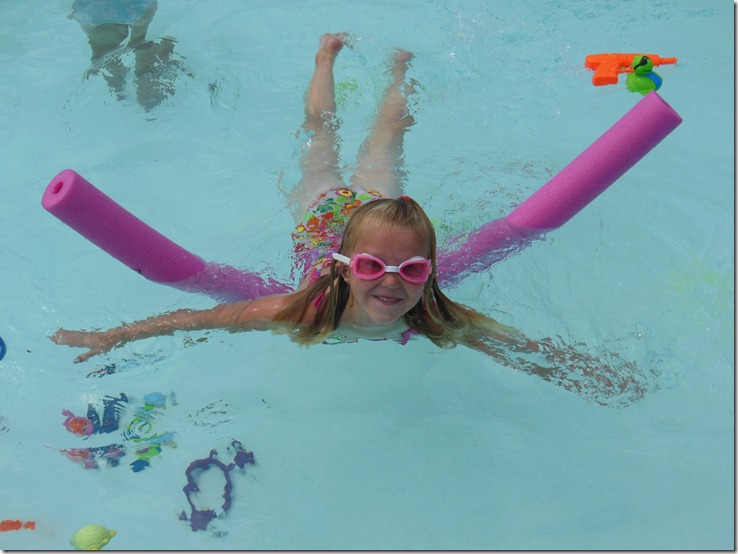 There is something so contagious about watching your children laugh.

We sure did love our first session of swimming lessons.  We have two more weeks scheduled in July, and Annabelle is so excited that she is going to graduate to the “Big Kids” class for the next round.