Posted on July 6, 2012 by A Desperate Horsewife

We had so much fun doing parades last summer that we jumped at the chance to join our friends the Points at the Middleton 4th of July parade this year.

As usual, this horse activity started several days before the actual event with the purchase of various red, white and blue accessories.  I even tried my hand at making yarn pom-poms like I learned at 4-H camp all those summers ago.  They turned out pretty well.  This picture gives a sneak peek at how we decorated the horse’s, well, nether regions for the event.

Of course, the decoration preparation pales in comparison to getting the equine himself clean and presentable for the big day. The night before the parade I sent Annabelle out to get the pony for his bath.  She was all ready to get wet in the process.

Batman was not to be left out of this fun, of course.  They both happily participated in the bubble bath application. 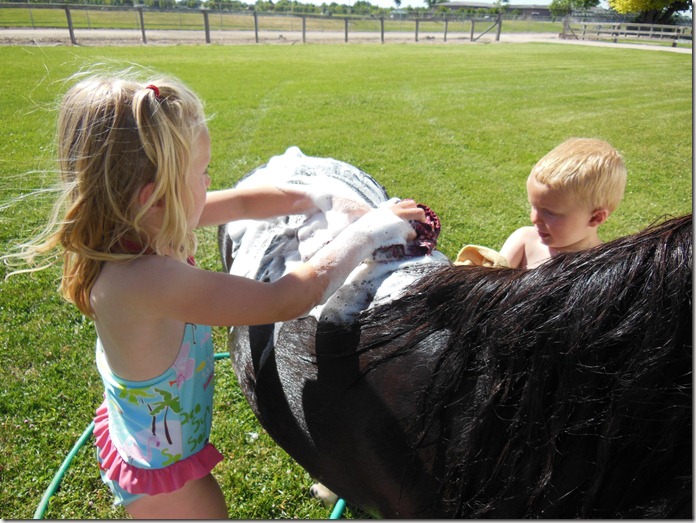 And took turns spraying the soap off after Reno was all scrubbed.

Any guesses about what happened right after I shot this picture? 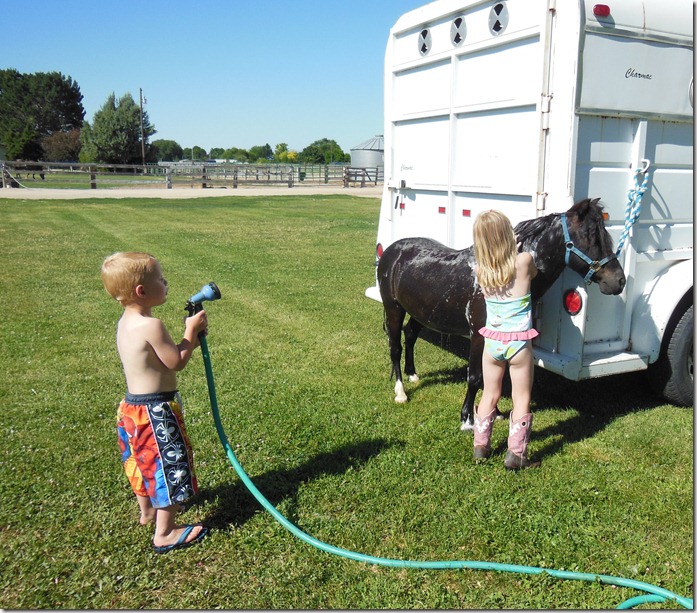 Once he was all cleaned up, we tied the pony in the sun to dry.

Annabelle applied about a half-gallon of Show Sheen to his mane and tail and brushed them out until they shined. To keep his tail clean we braided it and tied an old sock around the braided end. 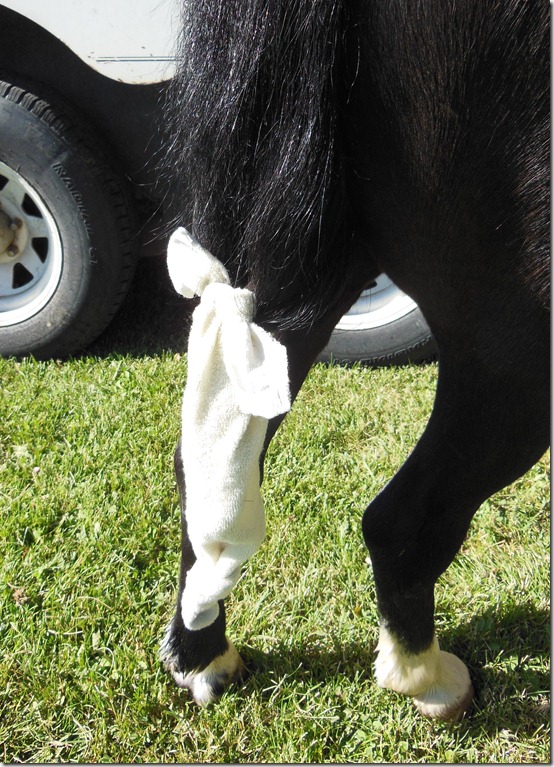 Which brought us to the next little problem that Annabelle had been nagging me about all week.

How would we keep the rest of the pony clean overnight before the parade?

Last year we had just turned him loose in his pen and hoped for the best, but that wasn’t going to fly this year.  With her newfound horse-show experience and her observations about how Kris keeps Chic clean for horse shows, my daughter was convinced we needed a sheet to keep Reno clean.  That was all well and good but for two problems:

2) I was pretty sure that no place in town carried a sheet small enough for our tiny pony.  Even if they did, I wasn’t really up for spending $75 or so for an item we would use only once or twice a year at best.

It had been earlier in the afternoon, as I waited in the check-out line at Wal-mart, that I had a sudden inspiration.  This inspiration was prompted by my perusal of the many items on the rack right next to the check-out belt.

I spotted a roll of pink duct tape.  “Hmmmm”, I thought.

I remembered a, well, sheet, that we had at home that had been purchased for Annabelle’s bed when she still slept on a twin size.  Since she had graduated to a queen mattress that sheet was just sitting in the laundry closet.

So I re-purposed it.

First I cut a pony-head sized hole in one end of the sheet and tried it on for size.  Looked like it might work!

I cut a couple of slits near the hind legs, and tied them loosely around his hocks.

A little pink duct tape around the girth to keep it in place and we were in business.

I had no idea if the sheet would stay in place overnight, or if we would go out to find a dusty, green-stained pony dragging around some small remnant of pink fabric when we prepared to leave for the parade the next morning.

To my happy surprise, my idea worked.  Well, mostly.  When we caught Reno early the next morning we did have a holey-sheet.  Sorry, I just had to say that..

Clearly Reno had spent at least part of the night rubbing his behind on the fence to try to get the sheet off, but it stayed put.  And when I ripped it off the rest of the way before we loaded him in the trailer I was delighted to see that he was still clean. 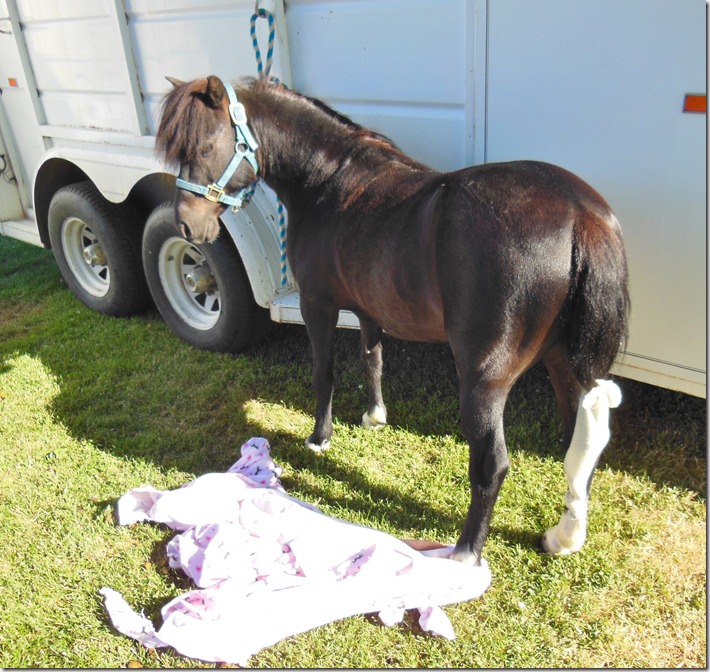 We loaded up and drove to Middleton, arriving right at our planned time of 9:30.  The judging was going to be at 11:00, so we had plenty of time to get ready.

Annabelle set about getting Reno’s tail out of the bag and brushing it.

The Points arrived a few minutes later, and just as I was finishing my first mane braid at 9:45, we were visited by a parade official.  Who told us that judging was in fifteen minutes.

Holy Batman!  How were we gonna pull that off?  There are no more preparation pictures. The next few minutes were a flurry of activity.

And this is the end result.

Not that it matters, because we just do it for the fun.  Yeah, that’s it.  The fun.  Rrrright.

Of course, our first place finish was a joint first place, with our wonderfully appointed cart-companion Mae, who pulled Batman and Kade and Kampbell along the route.

I have no idea how my friend pulled off all the decorations for the cart and pony in about twenty minutes, but she did.  That girl can move!

After the judging we sat around cooling our heels for about two hours.  It was hot.  Yes.  But the kids maintained their composure by getting off the pony and out of the cart and playing in the park next door under the watchful eye of Kari’s awesome husband Tom.

Finally it was time to go.  We were thrilled that we got to be right in the front of the horse section.  Here is Annabelle ready to lead the way. 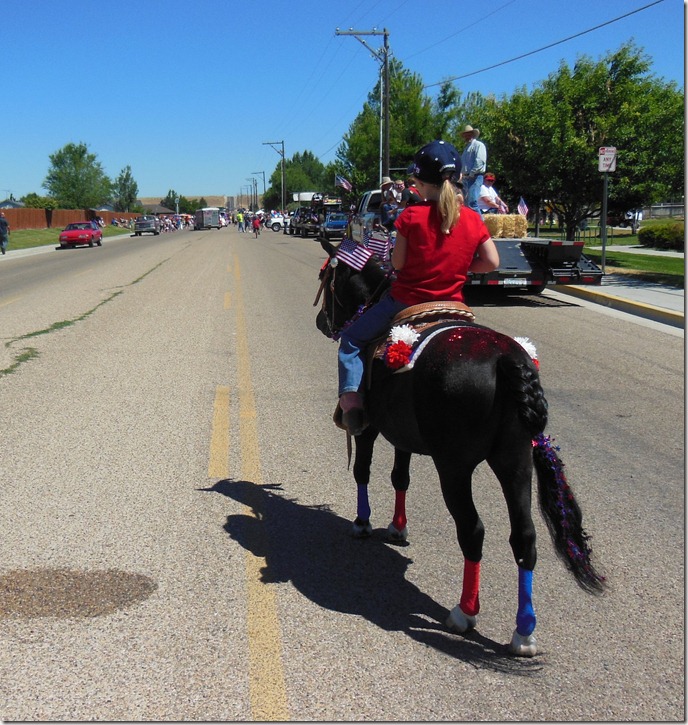 The parade was super fun.  All the kids on the sidelines just love to see the ponies, and I always feel like we are  sort of  ambassadors for the horse-lovers of the world.

We were so glad to participate.

Even as, about two miles into the parade route, I was jogging up a small hill with Reno trotting beside me to try to keep pace with the floats in front of us.  A man from the sidelines (which was packed, by the way) yelled out to me. He said:

I just smiled and tossed my head, trying to flick him with some of the sweat dripping off of my nose.  I said something to the effect that it seemed a lot like the gym.

But the truth was, I was really happy to be there.

Happy Birthday America.  We are lucky to live in the greatest country in the world.