Posted on August 29, 2012 by A Desperate Horsewife

A couple of weeks ago our family was thrilled by a visit from some old friends of mine from “back in-the-day”.  I have known Tony and Sandy for something well over fifteen years.  I don’t like to think about exactly how long because it makes me feel old, but it’s been a long time.  I met Tony first, when I went to work at a company in Alameda, California called Ascend Communications.  Sandy came along a couple of years later, and she fit right in with our eclectic group of friends.  So well, in fact, that she and Tony were married a short time later.

Ascend was a small start-up company when I began, with only about fifteen employees.  As was the case with most of the Silicon Valley start-ups, we were a close-knit group, bonding over “Friday Feast” (a big company-sponsored drunk-fest held every Friday afternoon in the company break room) and lunches out at the excellent Thai or Sushi restaurants the small town of Alameda offered.  With the mega-hours we spent at work, you would think that the employees would avoid each other in their rare off-hours, but that wasn’t the case.  Our group spent lots of time together outside the office too, mountain biking and hiking in the summer and skiing or taking a trip to Mexico together in the winter.

We all worked during a spectacular time in the Silicon Valley.  Our company went public on a Friday the 13th, 1994 at $13 a share (and I still think 13 is a really lucky number).  Shortly after our IPO we all enjoyed the meteoric rise of our stock, and the commensurate disposable income afforded both to us individually and as company employees.  The days of first class airline travel, five-star hotels and competitions over who could order the most expensive port and cigars were legend, and they will surely never be repeated in most of our lives.  It was definitely an over-the-top time.

I left Ascend in 1997, and Sandy and Tony retired within a year or two after that.  Our company had grown to a world-wide company with thousands of employees, and it was no longer the familiar and cohesive place to work it once had been.  I moved to Idaho, where I met Desperate Hubby and got married for the first time at age 36.  Sandy and Tony built their dream house in Pismo Beach on California’s central coast, and started splitting their time between there, a mountain cabin, and their home in Mexico.

We hadn’t seen each other in all these years, so I was wildly excited when I got a message via Facebook that they were planning a tour of the Northwest and wanted to stop by for a visit.

I’m embarrassed to admit that I also had a few trepidations about my friends’ stay.  Since I moved back to Idaho my life has changed dramatically, in all ways for the better, but I was a long way from the lithe blonde driving down Interstate 80 blasting country music in my Porsche Cabriolet that my friends had known.  I am truly happier than I have ever been, but my current life offers few of the trappings that I felt were important way-back-when.

Would they find me frumpy, I wondered?  Boring?

I set about planning a schedule of activities for my friends’ visit that would introduce them to some of the wonderful things that our great state has to offer, and give them a taste of the ridiculously awesome life that I am fortunate to enjoy.

Annabelle and I were flying home from Seattle the same evening Sandy and Tony arrived,  and we would start the trip off with picking them up for a whitewater rafting trip at 7:30 the next morning.

As soon as I pulled into the hotel roundabout and saw my old friends sitting on the bench outside the door all of my nervousness flew right out the window.

Just take a look at them!  You can see how down-to-earth and wonderful they are with only a glance. 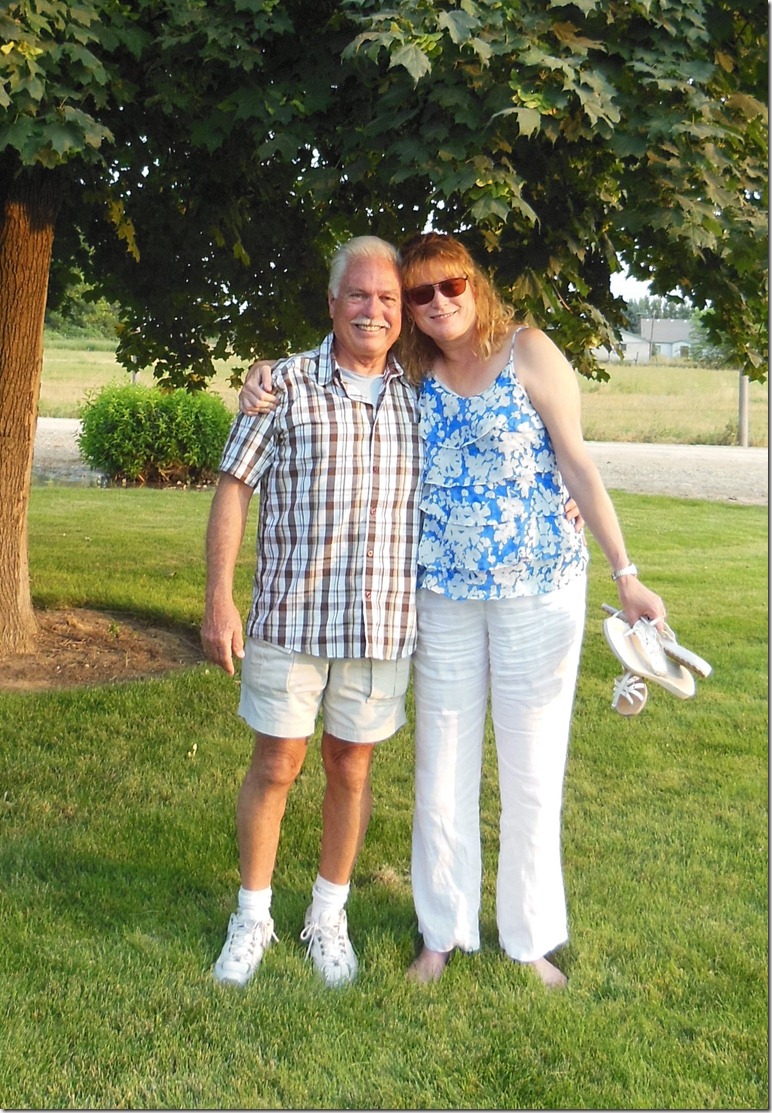 When they climbed into the truck it was as if I had seen them just yesterday. Sandy sat in the backseat between Batman and Annabelle, and they were jabbering away a mile a minute before we even hit the highway. Tony and I started getting caught up with all the events in each other’s lives as though it had been days instead of years.

The drive to Cascade Raft Company flew by as we all talked a mile a minute in the car.  We got checked in and loaded up in the  rafting bus for the short drive to our launch site.  After being fitted with our life jackets, aboard the raft we climbed.

I admit I was a little nervous about the rafting trip.  I had had a (literal) near-death experience while rafting some years ago in California, and I hadn’t been on a boat much since.  Our guide was Jeremy, who is co-incidentally the son of one of the local well-known equine veterinarians who had helped me with my horses tremendously over the years.  Jeremy was personable and competent, and that helped us all relax and have a good time.

And have a good time we did!

The kid started off in the back of the raft, sitting on the middle supports.  They thought that was pretty swell.

Then Jeremy convinced them to move up front where they could get more action from the waves.  They both gamely climbed up and really enjoyed the next couple of rapids.

Until this happened.  Yep, they’re there.  Up in front.  Completely submerged in whitewater. 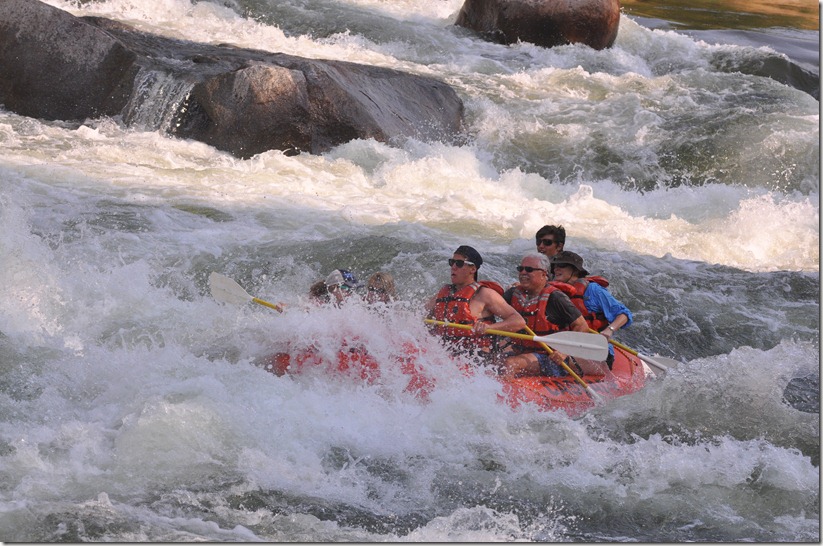 I think the look on Batman’s face afterwards pretty much says it all.  The kids politely asked to return to the back of the boat, where they rode out the rest of the trip in a little more controlled fashion.

We counted our rafting experience a big success, and after a hearty lunch in Eagle, we headed back to Caldwell to get ready for our next event.  The Caldwell Night Rodeo.

The evening activity was Desperate Hubby’s first chance to meet Tony, and they hit it off immediately. 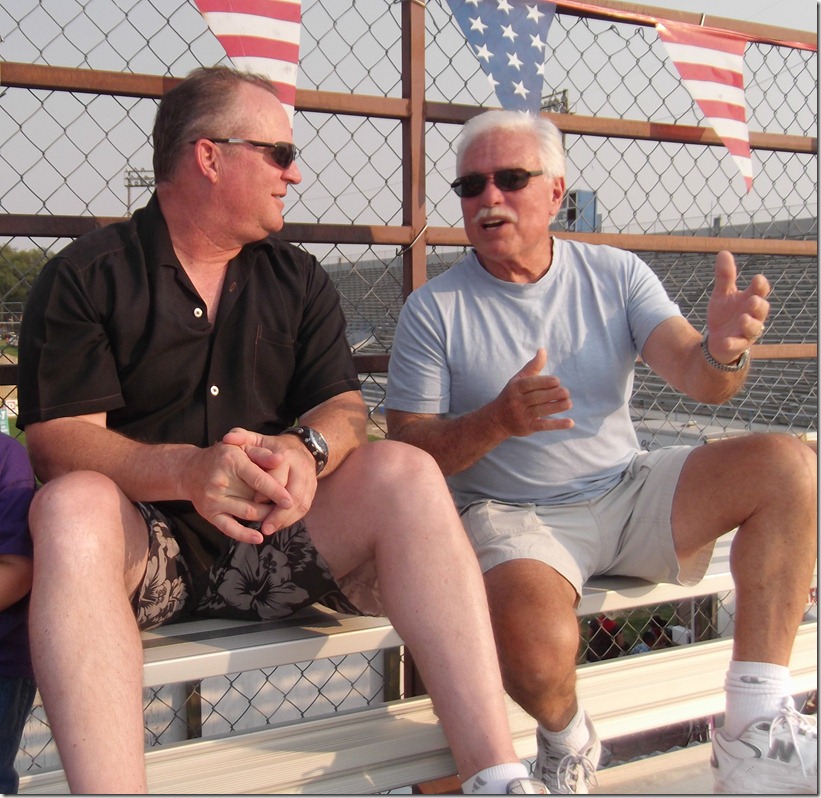 The kids took the opportunity to work on our dentist’s retirement fund with a little cotton candy.  Batman looks a little sugar-crazed, no?

We all had a great time at the rodeo, and then returned to our house for a few more stories and cocktails.  I’m not sure exactly what time my friends headed back to the hotel, but suffice to say that we celebrated their arrival with great zeal.

The next morning arrived earlier than any of us were really ready for.  Tony was scheduled for a flying lesson with Greg’s instructor, Darren, and I had to rouse Desperate Hubby out of bed shortly before eight o-clock to go and introduce the two.

Desperate Hubby had work to do, so Batman hung out with him while Sandy, Annabelle and I went to Eagle Island State Park for a nice horseback ride.

I’ve always known Sandy’s email name to be Samantha Cowgirl, and she lived up to it that day.  Despite not riding a horse for the past twenty-something years, she climbed up on Grumpy like a pro and we set off. She looked like some sort of cowgirl movie star up on old Grump.   She even had the hat! 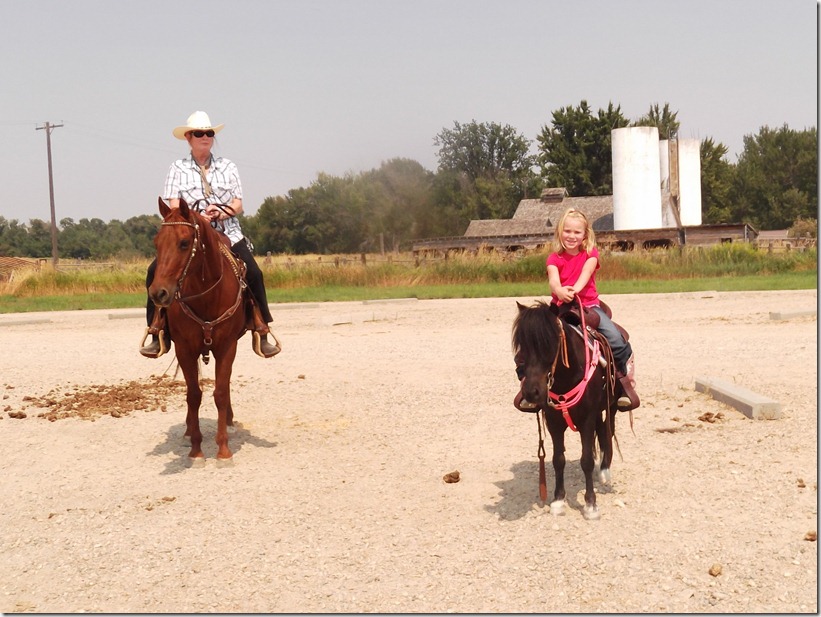 We had a beautiful ride along the trail, over bridges and through a variety of summer foliage. 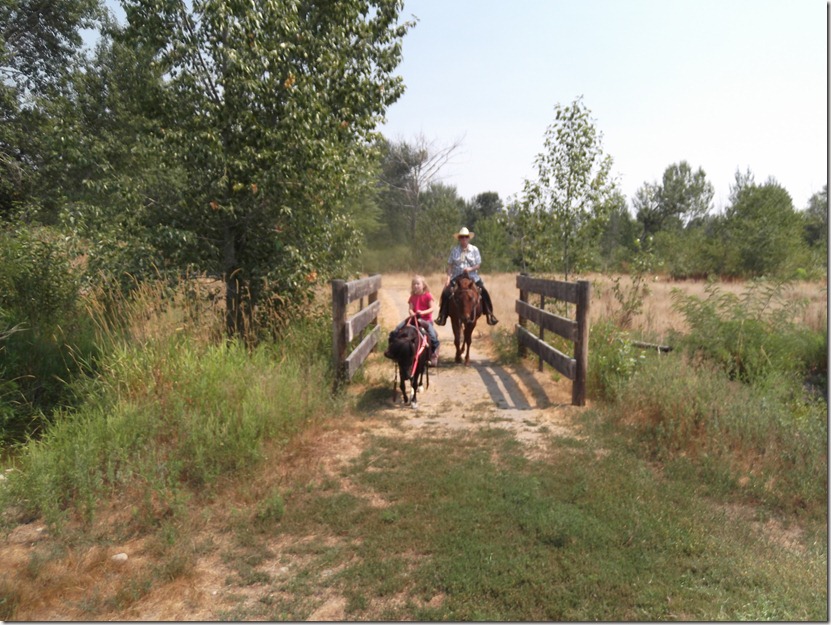 Grumpy tested out Sandy’s skills by stopping to eat and refusing to budge a couple of times, but she lined him right out and they got along great for the rest of the trip.

When we finished riding, some shopping was in order.  After a quick stop by Costco we were set for a big barbecue dinner.

With a special guest.  It was our adored neighbor Grandpa Vernon’s birthday, and somehow we had convinced him and Kay to share the evening with us.  He even made us a fantastic peach pie.

And a small banana cream one for Annabelle.

She is so spoiled.

Sorry about the picture Vernon.  I didn’t get one with your eyes open.  I know you hate having your picture in the blog anyway, and I’m sure this doesn’t help!  You’re still handsome, though.

Sandy and Tony and I had the chance to get all caught up on everybody from our past life, and I was so happy to hear how all of my old friends were doing.  It had been easy to imagine that everyone’s lives had stayed exactly the same once I left the great state of California, and it was great to hear that everyone (well, most everyone, with a couple of notable exceptions) had grown up and settled down to one degree or another.

After another late night, we were all tired the next day.  Tony and Sandy took the opportunity to do some laundry, take a nap and get ready for the next stage of their travels, and we reconvened for an early dinner at Smokey Mountain Pizza.

I’m not entirely sure what Tony is talking about in this picture.  Let’s just say it is a fishing story.

I am sure she would have left with them if they had let her.

But at least Batman stood with me and Desperate Hubby. Kind of like a partial family photo.

Later that evening we sadly bid our friends farewell.  They were scheduled for an early morning departure (which ended up being delayed by an optic-emergency, incidentally) and they wanted to get to bed early.

It was so gratifying to see my old buddies again.  They fit right in here in Idaho, and I think that a little Chateau in Caldwell would be an awesome fourth home for them.

What do you think, guys?

5 thoughts on “California Comes to Idaho”