Posted on September 12, 2012 by A Desperate Horsewife

The kids and I took a free Saturday and visited the Western Idaho Fair just before Annabelle started school a couple of weeks ago.  I have not been very timely in my blogging, but I wanted to capture a few moments from that day before they flew forever from my scattered stream of consciousness.

We met Auntie Kris at the fair, with the idea that we would have some lunch and then watch some of the horse show events being held as part of the program.

Our first stop was the Idaho NAACP booth, manned by one of my very favorite people, Jerry Baber. 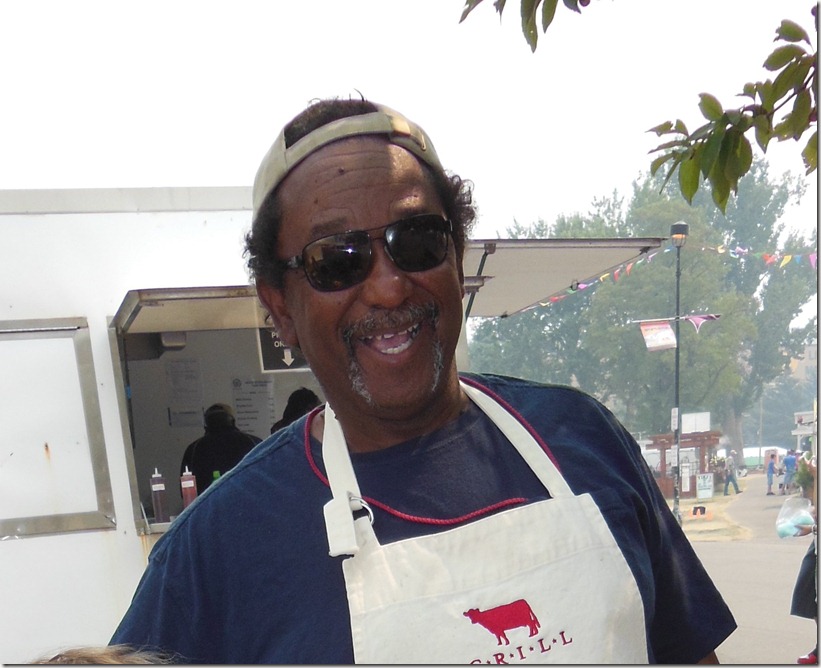 I’ve known Jerry for years through the horse showing crowd, and tales of his prowess with the barbecue are legend among anyone who’s been lucky enough to try them. I had never partaken of any of my friend’s BBQ specialties until that day, but I can say definitively that it was worth the wait.

The kids and I ordered one of almost everything on the menu, including Jerry’s fantastic smoked and barbecued chicken, corn on the cob, watermelon and to top it off, the best Banana Pudding I have ever had in my life.

After we gorged ourselves, the first order of business was, of all things, the Pony Rides.  I suggested to my two little cowpokes that perhaps we should let the other kids in (the long, long) line ride the ponies, and that we find an alternative attraction, since we could ride anytime we wanted at home.

Annabelle asked me if the people who ran the ride would have any way of knowing that we had ponies of our own that we could ride anytime we wanted to at home.

I was forced to admit that no, they did not have any way of knowing that.

You can see what happened from there.

After the pony rides we were drawn into the “Petting Zoo,” where we paid $3 per Dixie cup for a penny worth of grain to walk around and feed the already mostly obese animals.

Annabelle was disappointed that the large Indian steer would not accept any grain from her, but she tried to pet him anyway. 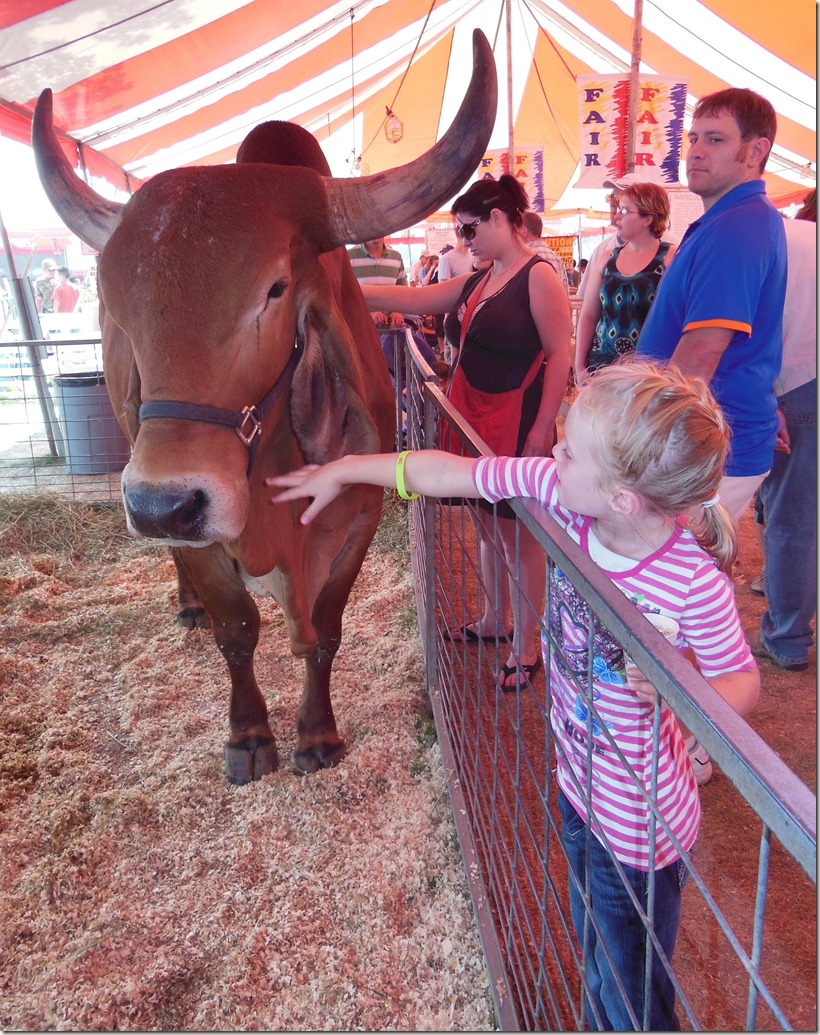 Zachary looked in wonder at the huge horns on this goat.  After he stood there for awhile, he asked me “Mom, if I HAD been growing horns before, like I thought I was during the camping trip, do you think they would be this big by now?”

I didn’t really have a good answer for that.  But I laughed. 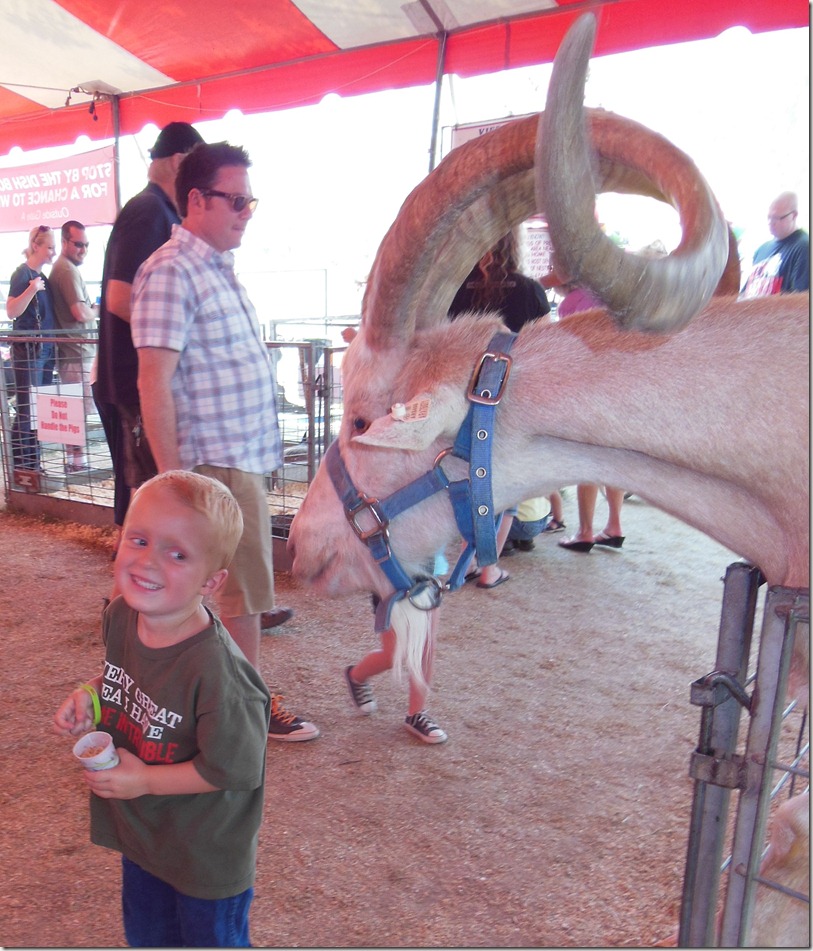 After we fed all of our food to the animals (which took a while since Annabelle was quite selective about which animals she thought deserved it) we finally exited and decided to go on a few rides.

Is anybody surprised that this was Annabelle’s favorite event of the day? 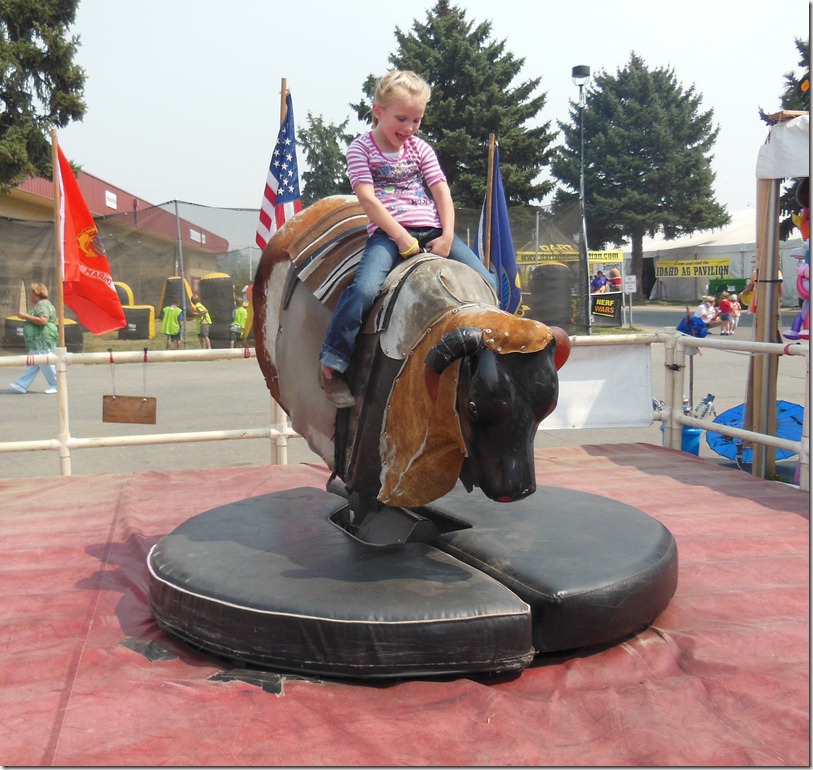 She told me afterward that she was pretty sure that she rode so well because of all her experience with bucking her pony Reno out.

Our first real carnival ride was the Ferris Wheel.  At first Batman was scared to get on, but at the last minute he finally agreed to ride with me.

Annabelle and Auntie Kris were in the bucket right in front of us, and we could see them every time we went around.  You could really see the smoke from all the area fires when you got to the top of the ride.

Batman had a white-knuckled grip on the safety bar the whole ride, and he also insisted that I put my arms around him to hold him in.

By the very end of the ride he relaxed a little, and finally conceded that it was “pretty cool” to be so high in the air. 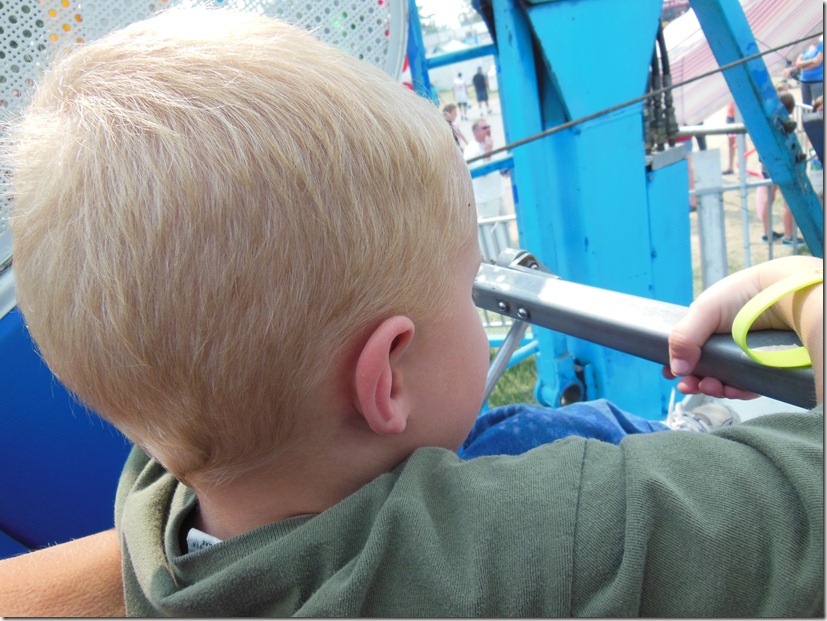 The kids went on a few rides by themselves too.

This particular ride was touted as being straight from Michael Jackson’s Neverland Ranch.

For some reason I found that to be an odd and faintly disturbing claim to fame, but that’s just me.

The kids liked it though.  Well, until Annabelle figured out you could spin the little basket around, which caused Batman to wail in fear. He screamed so loud that we could hear him over all the fair noise.

Eventually he decided it was OK though, and he even kind of smiled for the rest of the trip.

Once we got the rides out of our system, meaning that I refused to buy any more paper coupons (or let Auntie Kris do it either) we headed over to the horse show area.

They had a free-style reining competition and the themed horses and their riders were really fun to see.  After that they featured an actual costume contest where the horses were dressed in elaborate costumes, many featuring small children in complementing outfits being led around the ring by parents.

It was really cute.  Too bad I didn’t take any pictures.

But I did get a picture of Batman’s favorite part of the day……an unexpected visit with his beloved girlfriend, Kristi.

She took him to get a drink of water, and after all the food, the rides, and the excitement we had shared, that was his most favorite event of the day. 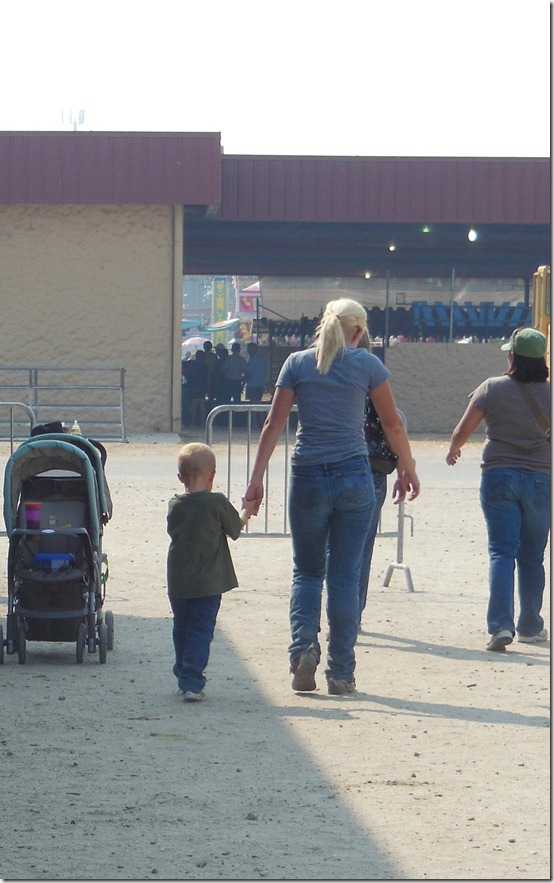 The fair was super fun, and Auntie Kris was a very good sport to hang around with us and go on all the rides.  Thanks Kris!

We can’t wait for next year.