Posted on October 31, 2012 by A Desperate Horsewife

Last night was my kinda girls night out:  a group of smart, articulate women, a few glasses of wine and lots of firepower.  Not necessarily in that order. Meaning that the wine came after the firepower. Which was probably best.

The October edition of Ladies’ Marksmanship Night was an especially fun evening for me, because I was getting to shoot my new Ruger SP101 for the first time.  This gun was my birthday present from Desperate Hubby for my 39th birthday a couple of months ago.  Shut up.  This is my blog and I will write what I want.

Anyhoooo, my beautiful new pistol had been sitting in it’s case for the past couple of months waiting for me to shoot it.  I would pull it out every week or so just to take a peek.  Because it is so beautiful.

From my very first shot I knew that it had been worth the wait.  For a relative newbie to the world of handguns the 101 was a very approachable firearm.  Ever since I loaded the clip of DH’s .45 with the bullets backwards at our last meet, I had been a little nervous about trying to perform the shooting routine on my own.

And by “on my own”, I mean without the patient guidance and helpful assistance of our shooting ringleader, Christine.  If you recall, Christine recently sailed into the sunset with her beautiful family for a year or two, and left our shooting group to our own devices.

So, from the get-go I was hoping for ease and simplicity in my new pistol.  Which was exactly what it delivered.  Operation of the gun was straightforward (i.e.: the bullets won’t even go in backwards) and sighting is a breeze with the easy-to-see green infrared sight.  That doesn’t make sense. ” Green infrared,” I mean.  But it’s what the box says.

I first shot a couple of cylinders of the .38 shells DH had packed for me, and I was thrilled.  The gun hardly kicked at all, no more than a .22 revolver, and the grip size was just perfect for my hand. Then I gave the gun to Tawny, the only member of our group brave enough to weather the high-caliber side of the range with me, and she shot some .38’s.  She loved the pistol too.

Next I ran a cylinder of the .357’s through the gun, and while those had a little more percussion to them the gun was still very manageable, and my pattern was no larger than I had shot with the .38’s.

I was pretty happy with my target by the time I was finished. 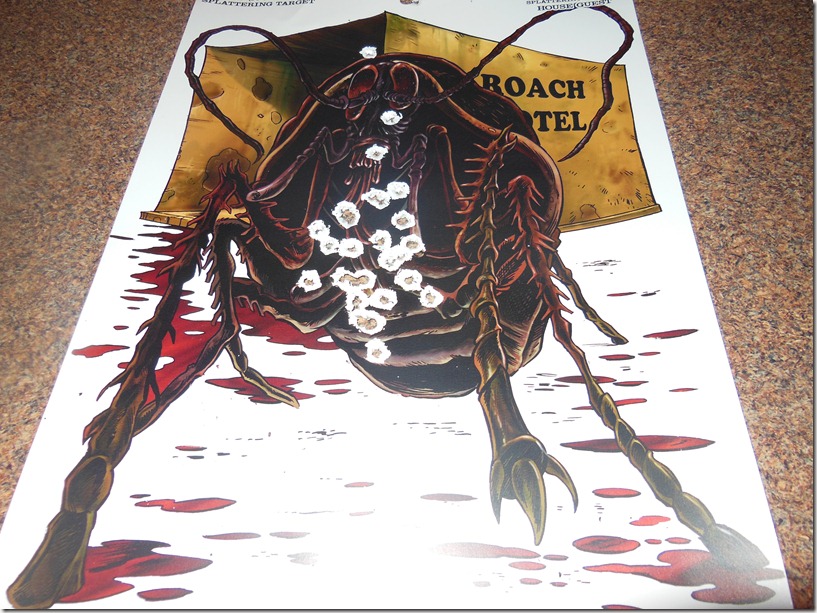 When the range master had to come to help Tawny un-jam her 9 mm during our session (we miss you Christine!) he looked at my pistol and asked if it was the 101. When I told him yes, he said “Oh, I LOVE that gun!”

The other girls all joined us just before the range closed, and everyone got to shoot the gun at least once.  The gals all liked the feel of the gun, and even the usual .22 shooters were surprised by the lack of kick.

The real clincher was when Tawny announced that she wanted an SP101 for Christmas.  She was converted.  I hope Santa doesn’t let you down Tawny!

After we were finished shooting we all retired to Rudy’s Lounge for a little snack and a glass (or two in my case.  Shut up.) of wine.  We were joined there by our interim leader, Valerie, who had missed the shooting but was happy to be able to join us for the social hour.

We had the waitress take a really bad picture of us.

Someday I’m really going to have to read the instructions for my camera.

Anyway, I’ll leave you with a last picture of my beautiful new gun, as well as a hearty recommendation to try the Ruger if you are in the market for a personal protection weapon or even just something to go shoot at the range.  You can’t go wrong with the SP101.