Posted on December 8, 2012 by A Desperate Horsewife

It has been a busy week around our household.  In addition to our regular hectic schedule, Holiday Parties, preparations for Santa, and just general Christmas craziness, we have had our hands full keeping up with Sparkles.

I’ve highlighted a few of the inventive little Elf’s activities here for your review.

On Wednesday, Sparkles wrapped the kids’ entire bunk bed in Christmas paper.  Batman was the first one home from school that day, and he just stood and stared.

He was happy to discover that Sparkles had added a small gift for both he and his sister to the top of the package.  She had also suspended herself below the new Christmas puppies with a ribbon harness that upon closer inspection looked suspiciously like a noose. 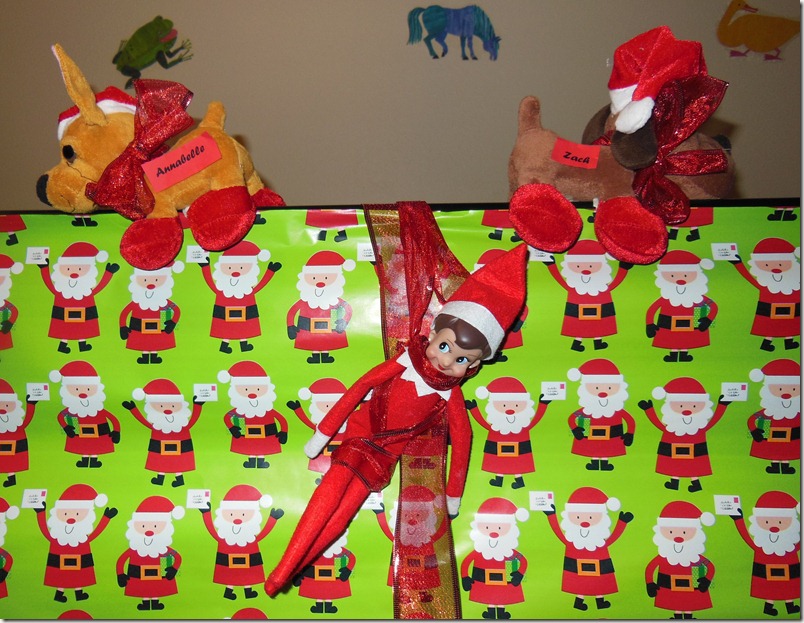 The kids exhibited great self control by leaving the package intact, puppies included, until their dad got home from work.  Then they ripped it into a million pieces and took the stuffed dogs to bed with them.

The next morning we woke to a sight I found quite disturbing. 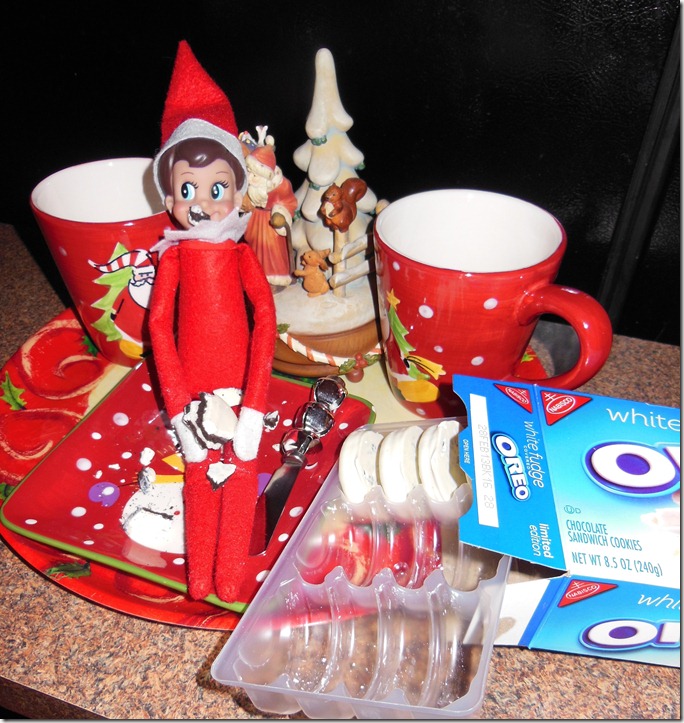 The Elf had discovered my secret stash of White Fudge covered Oreos (and by secret, I mean secret…. I even forgot where it was for a couple of days).  She opened the package and ate several of the cookies, leaving crumbs scattered around the festive dishes she chose to eat on.

The evidence was irrefutable.  She even had a big chunk in her mouth.

Notice how she is avoiding my gaze in the picture.  Definitely guilty.

The next day the Elf got into more trouble.  Apparently channeling Batman, she got a box of Hello Kitty band-Aids out of the bathroom and covered herself in them. 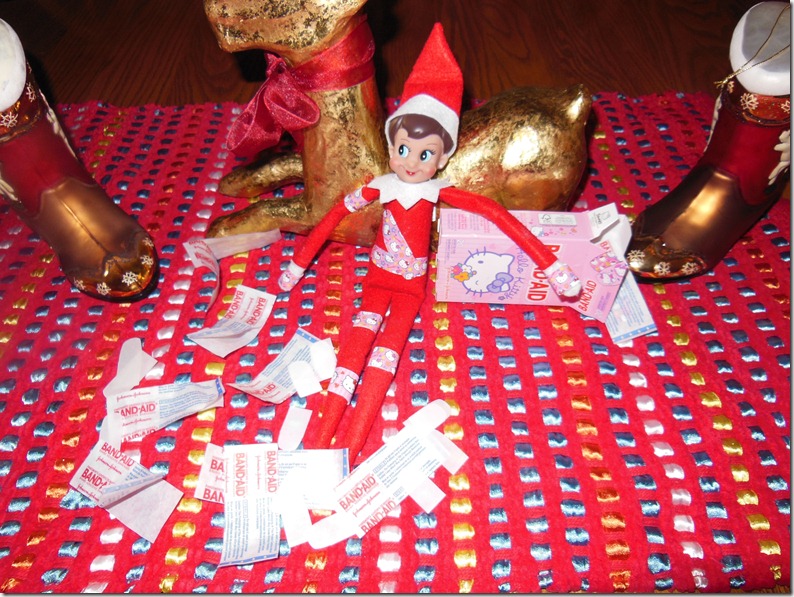 When I mentioned to Batman that Sparkles was trying to be like him he became very indignant.  He said she was nothing like him.  The band-aids that he covered himself with on a daily basis were completely necessary.

She was just playing.

Then he carefully picked up every piece of band-aid refuse and carefully placed it in a Ziploc baggie.  Under his pillow.

I wish I was making that up, but I’m not. 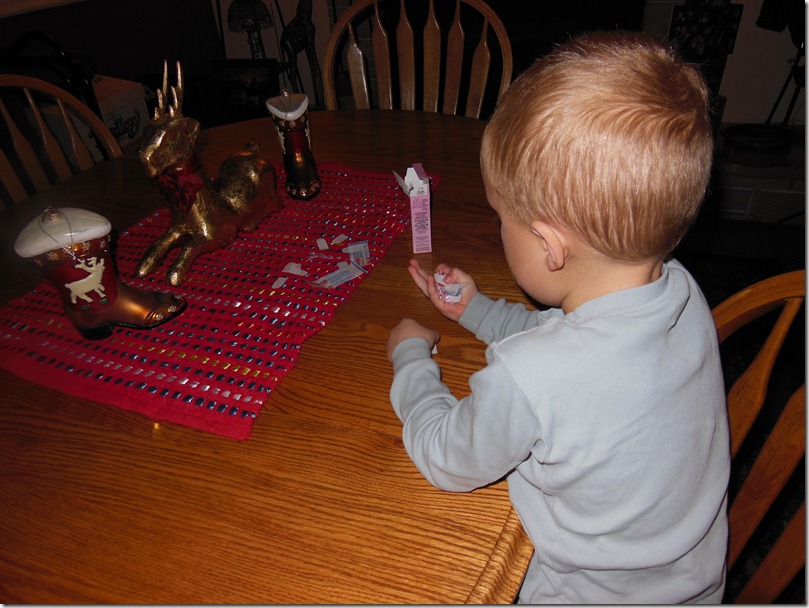 Yesterday Sparkles pulled off what was probably her coolest stunt yet.

She turned the coffee table into a sledding hill. 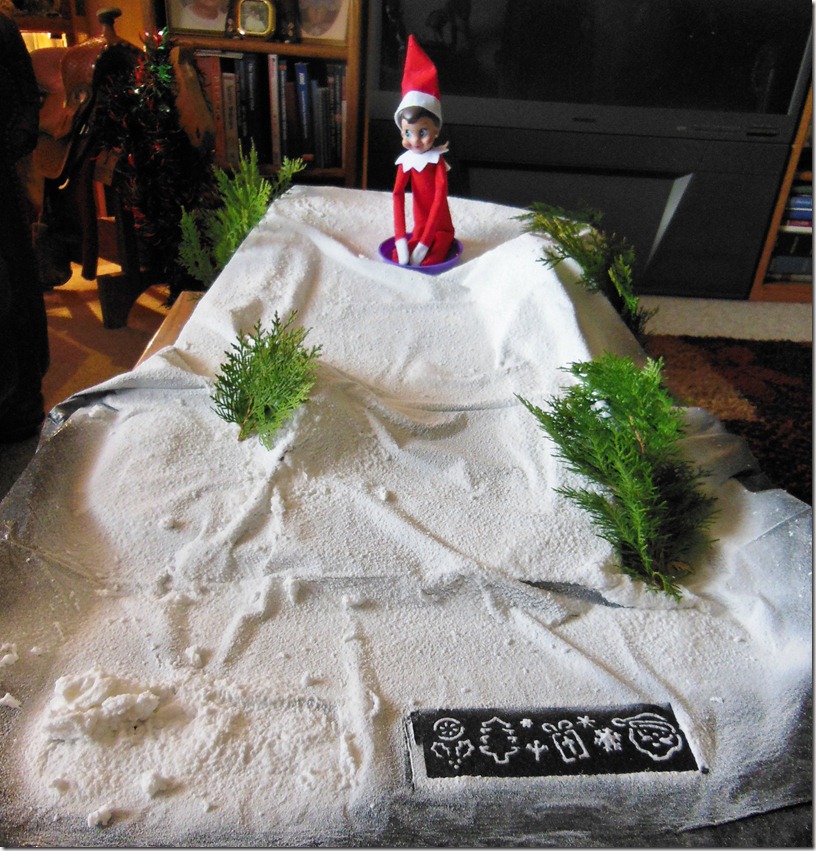 The ski hill was complete with shrubbery that looked remarkably similar to the tree outside our front door.  It also had a cool stencil on the bottom with a picture of Santa.

When I brought the kids home from school they ran into the house to see what Sparkles had done.  Before I could stop him, Batman ran his finger through the spray-on snow that covered the hill.  The he licked it and said “It tastes really good!”

Apparently the snow was non-toxic, because he seems fine today.

I thought Sparkles looked super cool in her little toboggan at the top of the mountain.

In other Christmas news, Batman has amended his Santa Wish List yet again.  This time he has added a Nintendo DS to his list.  Santa is still considering whether to make the change.

Annabelle is still content with her wish for All-Things-Pink for Grumpy.  Sorry Grumpy.