Posted on December 26, 2012 by A Desperate Horsewife

It probably comes as no surprise that Christmas Day started pretty early around here.  We had all gotten to bed at a fairly reasonable hour after a lovely Christmas Eve spent with Greg’s family in Eagle.  The kids were wound up and a little hard to settle down, but they were also really tired, which helped to reinforce the admonition they had received from the Elf to “go to bed and stay in bed.”

Together we put out some pumpkin chocolate chip cookies along with a mug of egg nog for Santa, and they toddled off to their room.  Their bedtime passage was eased by the comfort and warmth of new quilts made by Grandma Becki for each child.

Annabelle got a retro-western themed quilt, beautifully finished with the softest red material on the back. 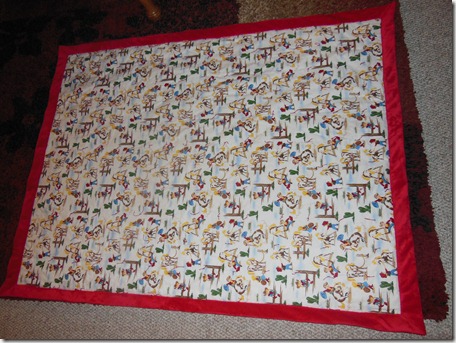 This picture gives you the general idea.  It was the perfect choice!

Batman’s quilt was in the theme of, well, Batman.  It was lovely too.

And featured the same super-soft mink-like fabric on the reverse side.

After ensuring that Santa was all set to deliver gifts at an undetermined later time in the evening, I took care of the cookies (with a tot of rum in the egg nog as a digestive) and headed to bed myself.

I awoke at 3:38 a.m. with the sudden realization that Sparkles the Elf had not, in fact, departed for the North Pole as she had promised in her letter and as had been defined in the book she brought when she joined us a month ago.  I sneaked quietly down the hall and made sure she got on her way, than returned to bed.  For another hour and a half of blissful sleep.

Just after five the door of our room flew open, and two shadowy figures descended upon us, squealing “Santa came!  Santa came!”  I mumbled something about waiting ‘til morning, and Batman happily climbed into bed with us, snuggling up against my side and sighing happily under the covers.

Annabelle was not to be so easily deterred.  “C’mon Mom!  Get up!  Get up! Santa came!”

Always watching my back, DH said (with almost as much excitement as the kids) “I’ll get up with you Woogie!” (long ago nickname, I’ll explain it sometime).  Of course I then had to say, “Well, you can’t open the presents without me!” and we all raced to the living room.

My pictures aren’t the greatest so I apologize in advance.

I did manage to get the kids to sit still for one brief moment before they started tearing into their presents.

Santa had done a pretty good job of sticking to their lists.

Batman got plenty of hunting stuff.

Along with a Nintendo DS and the Mario game he had added to his list at the last moment.

And Annabelle got a variety of new items for her horse.  This headstall has a matching breast collar, and even though I’m not a big fan of colored tack, I think it is really quite pretty.  With the addition of the new set of leather romel reins from Aunt Kris she has a whole new bridle for Grumpy.

The zebra winter blanket will also help to make sure Grumpy stands out from the crowd.  Add on the bright pink bell boots from Grandma Kay and the matching polo wraps from Shawny and Sierra…..well, you get the picture. 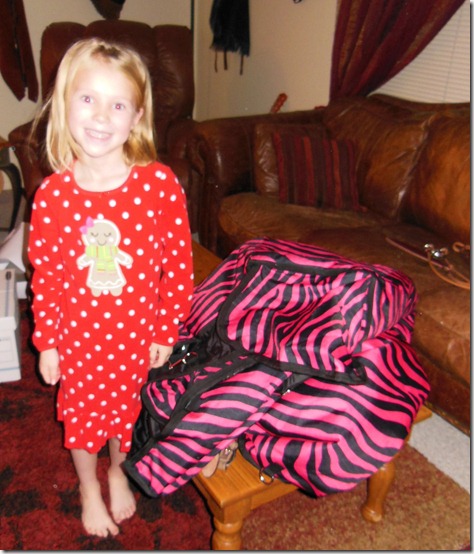 DH broke our pact to not buy any gifts for each other and bought me a set of saddle bags from Buck’s Bags that included a front holster so that I can carry my pistol when we ride out.  As my good friend and firearm-mentor Christine says, “Nothing bad has ever happened to me while I am riding out in the middle of nowhere, and I intend to keep it that way.”

There were gifts for the pets.  The Skinny Pigs got a new house for their cage, but they seemed pretty unimpressed with it.

And Winston got a new dog brush, which Annabelle immediately put to good use.

Once the gifts were all unwrapped and the house (relatively) straightened, Annabelle and I got dressed and headed over to the small town of Fruitland for service at the First Baptist Church, where my brother Rich is the pastor.

Rich’s service was lovely, and his message was right on point.  He talked about the “Reason for the Season” and “Why do we do all this anyway?” (sorry for the generalized paraphrasing, Richie), speaking to the overspending, overstimulation, and general overdoing of the holiday season, with little thought as to the origin of the holiday and the spirit it should invoke. While Richie and I don’t share identical spiritual beliefs, I absolutely agreed with everything he said and I found his message refreshing and well-delivered.  That boy has sure come a long way from the scrawny, shy lad he once was, and I could not be prouder of him.

We returned home to find Batman sound asleep and DH freshly awakened from a nice nap.  Annabelle and I thought that sounded like a good idea, so we crawled into bed and took a little snooze ourselves.  We awoke after an hour, refreshed and ready to move on to the next activity. A short drive to Uncle Doug and Aunt Melody’s and we were ensconced in another family gathering.

This time it was my side of the family getting together, and it was so nice to see everyone in the same place.  Doug and Melody live in the house that my grandparents built over 40 years ago, which was the site of the majority of the family gatherings we siblings remember growing up.  For the first year in at least seven years all of my brothers and sister were in attendance, and it seemed like old times.  We enjoyed a wonderful dinner of prime rib and smoked turkey, along with all of the requisite side dishes.

Aunt Melody presented Annabelle with a beautiful hand-made western belt, which cousin Kelsey beaded and tooled, and had in fact spent all night finishing up.

The detailing is exquisite and it looks just lovely with Annabelle’s new buckle. 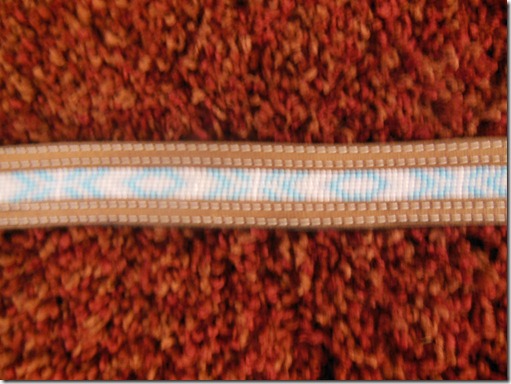 Kelsey even put Annabelle’s initial on the end.  So cool.

After the dinner was over, we drove home in the heavily falling snow.  It was a beautiful end to a beautiful day.

Last night I sat an drank some ginger tea (oh fine!  it was wine) and reflected on the holiday season and just how enjoyable and rewarding it is to experience it through the eyes of a child.

My children’s Christmas was added to by so many people who went out of their way to remember them, and I want to say big public thank you to all of you.  There is nothing more heart-warming or humbling to a mother than to know that her children are loved by many.  From our dear neighbors and adopted grandparents who got them just the right presents, to a lovely gentleman who knows them only through my blog yet sent them both generous gift certificates, thank you from the bottom of my heart.

While my kids are probably as guilty as any of being overly focused on the gifts and candy and hype, I have also made a real effort to educate them about what a great opportunity Christmas is to try to help those who don’t have as much as we do.

They participated happily in donating money to the Salvation Army at every retail visit, and delighted in picking out “Toys for Tots” and taking food for the canned food drive at school.   We have had many talks about how lucky we are to have all that we have, and while it is a difficult concept for them to understand, I hope they retain a little of that message.  In a world where it is easy to focus on what we receive, I hope that they are picking up on the fact that it is more rewarding to give than to get.

I hope everyone had a very Merry Christmas.

Categories: Kids Are Funny Creatures, Life in the Country, Uncategorized | Leave a comment