Posted on January 19, 2013 by A Desperate Horsewife

Annabelle and I drove up our driveway just before noon today, and as we neared the house I saw several birds perched in the trees in our front yard.

Closer inspection revealed that they were robins.  Lots of them.

They were several of the red breasts visible in our trees, and many more perched in the park right across the way.

Although the temperature hovered around 3 degrees, I couldn’t stop myself from trying to get a few photographs.

All of the birds were fluffed up against the cold, making them appear larger than life.  Their brilliant colors stood out beautifully against the frosty blue-gray sky.

This duo hung out contentedly on nearby branches.

I have always heard that robins are one of the first birds of spring.  I sure hope that’s true.

Interestingly, robins weren’t the only birds in the tree.  This little brown finchy- looking fellow was near the very top of the branches, all by himself.  He was the only one of his kind there.

And this black-and-white beauty was right in the mix too.  At first I thought it was a magpie, but on second glance it seemed too small.  It was no bigger than the fluffy robins in size.

Whatever it was it was pretty.

Annabelle and I were worried that the robins might be hungry.  We came into the house and looked up “What to Feed Robins” on the internet.  We were surprised to see that in the winter they are primarily fruit eaters.  The article we read said that they really liked apples.  And Cheerios.

So we made them a snack.

Since we didn’t have a bird feeder, we just attached the tray to the top of an old milk can and put it out near the big tree. 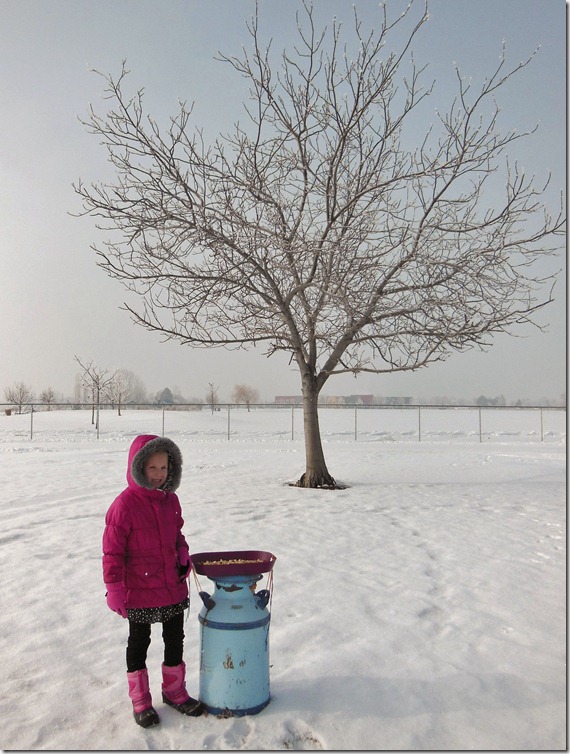 Several robins returned to the tree after we came back inside, but none of them went down to eat the food.

Shortly after that, Batman went outside with his ‘Wounded Rabbit’ call to try to lure in the neighborhood fox, which both Grandpa Vernon and Daddy had seen lurking around the pasture the past couple of days.  He made so much noise that all the birds flew away.

They haven’t been back since.

Upon re-entering the house, Batman pronounced that he had indeed called in the fox.  In fact, he had called in ten foxes.

And they had bitten him.  He went immediately into the bathroom and covered his entire right arm in band-aids.   I have currently been unable to verify his injuries.

In other photographic news, we had the most beautiful sunset last night.  The whole western sky was lit up with a bright blaze of color.  It almost looked the Northern Lights.  Except that it was in the south. 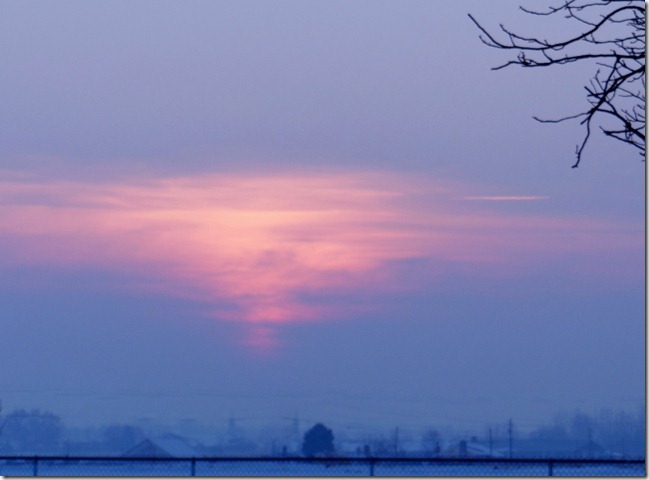 And last but not least, of all the photos I took yesterday one mysteriously did not load from my camera.  I did not, in fact,  find it until today when I was taking a look at the bird pictures.

It is of my mare Spice, immediately after I took the “dead horse” photograph, as she woke up briefly from her nap.

I swear she is smiling for the camera.

One thought on “Red Breasts, Northern Lights and a Happy Happy Horse”