Blackie and Pumpkin…..or “Why I Should Not Be Left Unsupervised With The Children”

Annabelle has been on a quest for a baby kitten for about six months now.  She got the idea in her head last fall when we were in Utah picking up our new horse Freckles.  Freckles’ former owner, Aaron, had a litter of baby kittens, a couple of which were orange and about the cutest little things you had ever seen.  Fortunately for us, the kittens were too young to leave their mommy, so we temporarily dodged the kitten acquisition bullet.

Ever since that trip, Annabelle has brought up the subject of getting a baby kitten with varying regularity.  She actually embarked on a letter writing campaign to Santa Claus, beginning in February of this year and continuing through March, writing letters about once every week or so asking Santa to please bring her a kitten.  Oh, and since she was so good, she would like her kitten NOW, not at Christmas-time.

Santa returned her letter sometime toward the middle of the campaign, encouraging her to be a good girl and show her parents that she could care for a kitten properly and not fight with her brother (why Santa thought that fighting with your brother pertained to kitten-ownership is beyond me) and he would reconsider her request a little closer to Christmas.

My darling six-year old wrote back and in slightly firmer language reminded Santa that she WAS a good girl and was fully prepared to care for a kitten, as she already took care of Grumpy and the dogs.  Oh, and she really, truly would like her kitten sooner than later.

When Santa didn’t write back after that, my little mini-me checked the mail for several days looking for a reply and then let the matter drop.  I thought “Whew, that was close,” and sort of forgot about it.

Until I ran over the dog.

Guilt is a terrible thing (for mommies) and apparently sometimes a good thing (for kids).  Somehow in the middle of Winston’s recovery from his encounter with the back wheel of our Duramax, (he is completely fine now, by the way) Annabelle had the perfectly timed foresight to bring up the subject of the kitten again.

I reminded her immediately of the other thing that Santa had written in his letter to her.  Santa had brought to my daughter’s attention in his correspondence that we had an agreement for no inside cats at our house, and that if she wanted an inside cat she would have to clear it first with our beloved friend, neighbor and landlord, Grandpa Vernon.  Santa is pretty wily.

Apparently, he thought that the burden of obtaining another layer of signatures, if you will, in Annabelle’s quest for the cat would deter her enthusiasm.

We had the pleasure (and the poor timing) of hosting Grandpa Vernon and Grandma Kay for dinner to celebrate Kay’s birthday that very next weekend.  Annabelle wasted no time in climbing up on Vernon’s lap and popping the question.  His reply was immediate and seemed to require no thought at all.  He said “It’s none of my business if you get an inside cat.  I don’t have to live with it.  This is between you and your parents – don’t try to put me in the middle of it.”

I really thought Vernon was a better friend than that.

And so the hunt was on.  We found a couple of litters of kittens during the next few days on Craigslist, but by the time we called to check, all of the kittens had been spoken for (amazing how that worked).  In a moment of weakness, I agreed that we could look at the Canyon County Animal Shelter’s website.  You see, I had previewed the website over the past several days and noticed that they didn’t post pictures of kittens on there.  The only photos to be seen were of the older, adult adoptable cats.

It seemed pretty safe, then, to let Annabelle look for herself and see that what I had been telling her was true:  the pound didn’t have baby kittens.  I was congratulating myself on my handling of the situation as the website came up, and the very first, second, third, fourth and fifth pictures loaded.  Unfortunately, each photo featured a tiny kitten: two orange, two black and one tabby.

The very next day after school we drove to the pound.  I was hopeful that all the little kittens would be gone.  As we walked into the lobby, the first thing we saw was a large kitty cage with a ramp and two different living and play areas.  In the cage were three tiny kittens:  an orange one, a black one, and a tabby.

Even though the choice seemingly was very straightforward, with the coveted tiny orange kitten literally within our grasp,  the nice young attendant at the front desk unwittingly drug out the drama just a little bit longer.  First of all, when she saw us looking at the kittens she proffered the unsolicited opinion that it was always better to get two kittens rather than one.  Batman’s eyes went wide. He had been begging for his own kitten for he past couple of days, and this advice was tantamount to a directive from the pound gods as far as he was concerned.

Than she told us there were more cats, just down the hall in the “Cat Rooms.’”  We voyaged into the Cat Rooms to find many grown cats in cages.  Being of small stature, both kids immediately gravitated to cats on the bottom level of the cages; Annabelle started playing with an 8 month old fuzzy gray and white kitty, while Batman approached and started petting and talking to a pretty four-year old calico gal.

After much discussion, negotiation and pleading, I finally agreed that they could each get a cat, as long as they realized that they would not be totally inside cats. After visiting and playing with every single cat in the two Cat Rooms, the kids stuck with their first choices. Batman had his heart set on the calico, who seemed to really like him and nuzzled him and purred through the wire.  My little-cat loving daughter wanted the long-haired cat desperately, even though I told her I (strongly) preferred a short-haired version.  I was secretly thrilled that they were going to adopt older cats.  I knew that many adult animals languished in cages waiting for adoption, so we were doing a good deed by giving these mature animals a home.

We walked up to the front desk to report our choices, and as we passed the cage with the tiny kittens Annabelle had an abrupt change of heart.  Although she had steadfastly refused to consider any other cat in the back rooms, she instantly decided to change her choice to the…….orange kitten, of course.  Batman stood his ground for a moment, but soon he wavered.  He, too, wanted a tiny baby kitty.

Being the sensitive soul that he is, though, Batman was also greatly saddened to think about leaving his calico friend in the Cat Room cage.  Big crocodile tears rolled down his face as he pleaded to get both cats.  It really was hard to say no, but I did.  We had to go sit on the bench in the corner for a few minutes to compose ourselves before we could move forward, my little man still swiping tears as he told the girl behind the front desk he wanted the tiny black kitten.

With the purchase done and kittens safely ensconced in their carrier between the kids’ car seats for the ride home, Batman still worried about his calico friend.  “Mom, do you think my other kitty misses me?”  I assured him that she did, but that since she was so beautiful and friendly surely someone would adopt her soon.  That satisfied him for a minute or two.

Then he proclaimed this: “When I am a big kid and a grown-up and I live by myself, I am going to go back to the pound and get that cat!”  I smiled at him.  “That sounds like a really good idea buddy.”  He was quiet for a minute, then he said “But do you think she’ll still be there?  She would be really old by then.”  We thought about that quietly, and he sniffled a little more during the rest of the short drive home.

As soon as we arrived, the kids went about indoctrinating the kittens into the family.  Annabelle wasted no time wrapping up Pumpkin in a blanket and putting him to sleep by rocking him in the rocking chair.

Batman held Blackie for a while as he watched TV, but soon tired of the squirming and scratching and put him back in the dog kennel, which we had set up as the temporary cat house.  Then he sat beside him on the floor to watch him play with the ball I had cleverly suspended from the top of the cage. 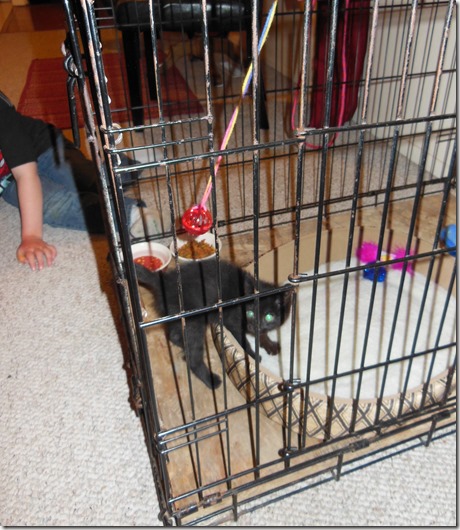 I texted Desperate Hubby, who was conveniently gone on a fishing trip to Nevada, a picture of the kids holding their new prizes.  I wrote the caption “Just shoot me!”  He texted back a terse reply “Two of them? BANG!”

It was difficult to get the kids to go to bed.  They wanted to stay up and play with their kitties all night.  They finally did succumb to sleep though, but the first thing they wanted to do in the morning was play with the cats.

Even while they ate their breakfast waffles. 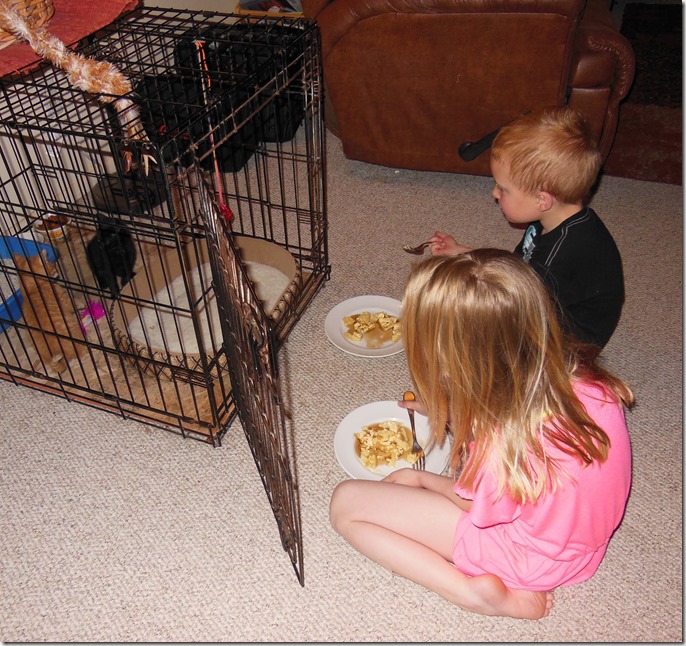 Annabelle has had her cat out and about today, going to greet Grandpa Vernon by the horse pens and wandering around to see the outside of the place.

She made sure he wouldn’t get cold by putting on his little pink turtleneck sweater and wrapping him securely in her blanket.  I think he was grateful.

Batman has played with his kitty too, though not with the same level of devotion as his sister.

Desperate Hubby will be back tomorrow afternoon.  It will probably be a long time before he leaves me home alone again.

4 thoughts on “Blackie and Pumpkin…..or “Why I Should Not Be Left Unsupervised With The Children””