Two weeks ago a little angel joined our family.  My brother Rob and his wife had a gorgeous new baby boy.  His name is Rex.

(Editors note: I don’t know who this chubby-looking woman is holding the baby next to Annabelle, but she is wearing my wedding ring.  And necklace.  And belt.)

Annabelle and I were en route to Paso Robles, California for the NRCHA Derby when Rex made his entrance to this world.  I could just hear Rob beaming with pride over the texts when he sent the first picture of little Rex out into the world.

Because we were gone for a whole week, we didn’t get to meet Rex until he was a eight days old.  Annabelle took to him right away, being the confirmed baby-lover that she is.

I took Rex at the beginning of our visit and held him for almost two hours, walking around cooing and swaying until he went to sleep.  Rob and Mel tried to take him from me several times (I think they were a little worried I wasn’t going to give him back), but I just kept on holding him until I was forced to relinquish him to my daughter and his big sister, Emma. 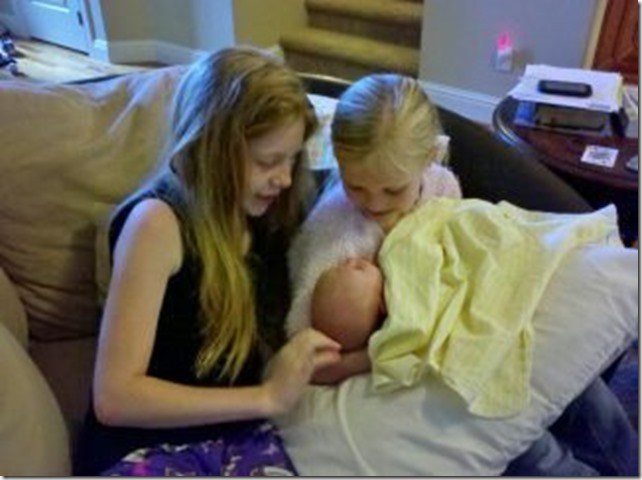 I was most surprised by the level of interest that Batman displayed in his tiny cousin. He even forego an extra helping of chocolate syrup on his ice cream to hold Baby Rex.

Unfortunately, by that time Rex was getting very hungry and not a little mad, and he didn’t exhibit the same level of enthusiasm as Batman did.

I am sure they will be best buddies someday.  But not this day. 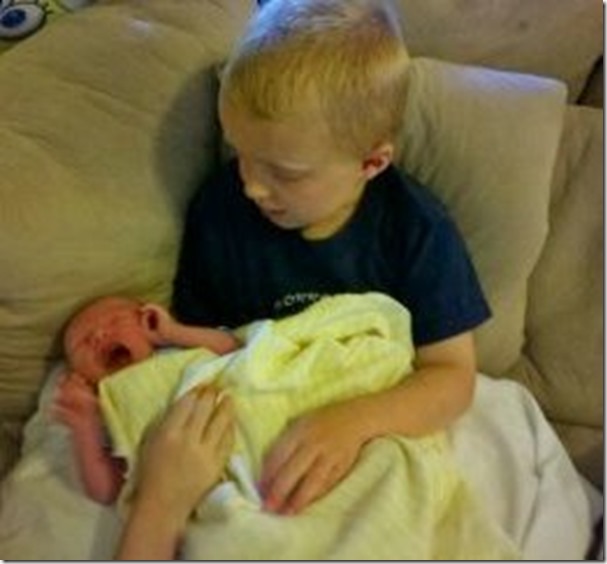 Yesterday we joined several friends and family members in throwing a little welcome party for Rex.

I made this really yummy cake for the party.  Oh wait, did I say ‘made’?  I meant I bought it from Pastry Perfection.  They do a good job on cakes.

I did briefly channel Martha as I made these little pineapple boats and filled them with the cut pieces of pineapple and some freshly sliced peaches.

Baby Rex was passed around plenty at the party, because of course everybody wanted to hold him.

This is pretty much how he handled the entire afternoon.  He is the sweetest little baby I have met in a long time. 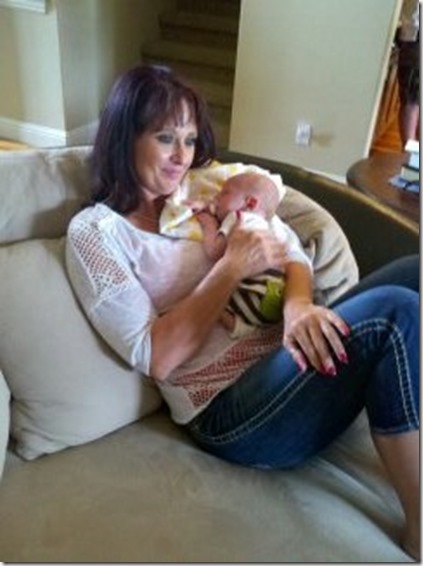 After we all visited and ate some snacks, we watched Mel open the big pile of presents in the living room.

She got lots and lots of nice stuff for Rex.  Clothes and blankets; diapers and even a changing table.

But what we all waited for was this:

Mel saved the giant present in the middle of the table until the very end.  Then she was kind enough to let the kids help with the unveiling.

The box held a, if not life-sized, then very large, soft stuffed bear.

The kids were enthralled, but Baby Rex slept right through the whole thing.  I’m sure he’ll grow to appreciate the present before too long though.

The best part of the party for me was getting to finally meet my sister-in-law’s mom, sister and brother-in-law, who are all visiting from out-of-state to get to know the new baby.  Although I didn’t have the presence of mind to take photos of them (or to take my camera at all, hence the sub-prime images from my phone) you can trust me:  they are the warmest, funniest and most down-to-earth people you will ever meet.

I couldn’t be happier for the new parents.  Like me, Mel waited until a bit later in life to have her first baby, and I think that makes the appreciation of the miracle even a little more poignant.  I can’t wait to watch Rex grow and flourish under the multitudes of love that I know he will enjoy.

Welcome Baby Rex.  We love you.

2 thoughts on “A Beautiful Baby Boy”