A Tribute to Papa Bill

Posted on November 28, 2013 by A Desperate Horsewife

It’s Thanksgiving morning, and I am sitting at the hospital bedside of my grandfather, William Smith, or Papa Bill as we know him in the family.  Papa Bill is not my grandfather by blood, but by marriage, and almost more than that, by friendship.

I am not certain that Papa Bill knows I am here, but I think he does.  He is responsive to questions from the nurse and opened his mouth this morning when she asked, even nodding yes in response to a question.  When I speak to him he moans softly as though he is trying to answer.  He doesn’t open his eyes, though, and for the most part he is in a fitful sleep.  Papa Bill suffered a massive stroke three days ago, and this hospital room will be his final resting place.  This is by his own choice, his directives, written months ago when he was of sound mind, are very clear.

I have been through this process, the process of dying, three times now in my life.  Once with each of my grandparents, and once with my mother.  Practice does not make it any easier.  Still, I will stay, and think of the happy times, keeping Papa Bill company as he travels through his final earthly journey.

As I sat here yesterday, I wrote on the little hospital tablet that I found in the packet of materials with the room service menu and comment cards. I wrote about my friendship with Papa Bill.

This is what I wrote.

Papa Bill was my first real family ally when I married in my late thirties and tried desperately to fit into the new bunch of people who were now my relatives.  I remember early on in my marriage when I had my new husband’s entire family over for dinner.  I like to think I am now, and was then, a decent cook, but preparing food for Greg’s mom and stepdad, grandma and grandpa, was stressful to me, and I wasn’t my best.

I burned the rolls, and the (packaged) gravy was gelatinous and lumpy all at once.  I was mortified, but had no choice but to serve the meal anyway.  Most of the family judiciously avoided the problem foods, passing on the rolls and eating their mashed potatoes with butter instead of gravy.

But not Papa Bill.  He demanded a roll, smeared a little butter on it and took a big bite.  “Delicious!” he pronounced.  “This is just the way I like ‘em!”  He ate more than one, as I recall.

I didn’t see Papa Bill very often during those next few years, but I always remembered that dinner.

When Bill moved into a senior apartment/assisted living center a few years ago it was a difficult time.   His wife, my husband’s maternal grandmother, had died a few years previously, and it was simply impossible for him to continue living in the big house they had shared alone.  He sat and watched as piece by piece his home was packed up and transported away.  We took home his washer and dryer, along with his wife Sugarfoot’s china hutch, which graces our dining room to this day.  Her corner curio cabinet sits in our living room holding my collection of handmade red glassware.  I sent Papa Bill pictures of the new locations of his treasures after we moved them in, and I think he approved.

In early 2011, I started taking a memoir writing class at the local community college.  I found that I absolutely loved writing the genre, and since I had always been very interested in Bill’s tales I asked if he would allow me to record his life story.

That question kicked off a two-month writing adventure for me and a journey down memory lane for Papa Bill. I would travel to his apartment each week and we would sit, either in his little living room, or on one of the comfy couches in the community room and talk.  I wrote notes free-hand on a yellow legal pad that was completely full of information by the time I was finished with the interviews.

After we talked, Papa Bill and I would go have lunch in the dining room of the facility, and I loved to meet his friends and find out the stories of the people who were his neighbors.

Each week I would go home and carefully write up the notes from that session, working to incorporate each new installment with the last and aligning information so that chronology was preserved as accurately as I could.  When I was finished typing, I’d email the manuscript to Papa Bill, and he would print it out and make corrections in ink, giving it to me to update the next time I came to meet with him.

Papa Bill is an extremely intelligent man, and his recall of early life was impressive.  He remembered at each meeting exactly where he had left off previously, and started each session at the appropriate chronological juncture.

When the manuscript was finally finished, Papa Bill gave it one final read and pronounced it ready to publish.  I printed it off on nice paper and Greg and I went together to the office supply store to buy a binding machine.  I made Bill several copies and took them to him the following week.  He mailed some off to his daughters who lived away, and others to family members here.  When I had lunch with him the next time I learned he had also given the story to friends at his residence to read.  I was flattered.

I know Papa Bill worried that I would stop visiting when we were finished with our writing project, and he asked me to please keep coming.  Of course I did. I didn’t come every week though, and not as often as I should have, but I came as often as I could.

We had become friends.  Unlikely as it seems for two people separated by more than forty years of age, we “got” each other.  Papa Bill has an acerbic wit that many people don’t understand and sometimes take offense to.  His humor delighted me, though.   I found him to be wonderfully droll and never unkind in his comments.

Papa Bill had a small bulletin board in his apartment that was filled with pictures of family members, and large upon it was a color photo of Annabelle riding her little black pony Reno.  She wore a bright pink jacket and the photo stood out among the others for both its size and luminosity.  He asked every time I visited about the kids and how the horse shows were going.  He bragged to lunch companions about the amazing horsemanship of both my daughter and me, though he had never seen Annabelle on a horse and it had been years since the single time he watched me in a reining competition.

Each visit with Papa Bill at his residence ended exactly the same way.  After lunch I’d walk back to his apartment with him and he’d load me up with gifts to take home.  For a long time Bill had enlisted his dining companions to “save” the little packets of crackers from the dining room, and he would give me grocery bags full of crackers each time I visited.  There were more individual packets of saltines than I could possibly ever use, and although he never knew it I would take them and give them to our daycare provider, who used them at lunch time for the kids.   Eventually the kitchen staff caught on to the scam, and they began doling out the crackers individually.  He still saved them for me but the quantity was greatly diminished.  When Papa Bill couldn’t get crackers, and sometimes even when he could, he would try to send me home with a pie. He loved Marie Calendar’s Frozen Chocolate Satin Cream pies, and always kept a few in his small freezer.  The pies were delicious, but I tried to fend them off as best I could.

After lunch we would visit.  We talked of many topics, from recalling past stories to politics, even about Papa Bill’s dreams.  Not too long ago Bill had told me that he had dreamed of his mother and grandmother, when he was a little boy.  He felt there was some significance to the dream, and he talked about their deaths.  I felt like he knew he’d be joining them soon, and he seemed more curious than afraid at the prospect.

After we had visited a bit, and bagged up crackers, pie or candy, Papa Bill would stand with his walker to see me out.  Early on he would joke “I just want to make sure you really leave!” but on the last several visits he didn’t say that.

We would walk slowly out to the parking area and I would give him a hug and a kiss on the cheek.  He would squeeze me back and then he always said the same thing.  “Thank you for coming dear girl.  Please come back soon.”  Although we didn’t have a lot of conversation during some of those visits, and toward the end practically none at all, I know they meant a great deal to him.

A couple of months ago Papa Bill’s health declined to the point where he was unable to care for himself in his apartment and he had to move to an assisted living center. I had not been to lunch with him since he moved, but I was at his birthday party there after his move and I could tell he was diminishing rapidly.

I feel badly that I didn’t spend much time with him in the past weeks, but I think he knows how much I care for him.  As I sit here, on what will surely be one of, if not the, final visit, I say Godspeed Papa Bill. 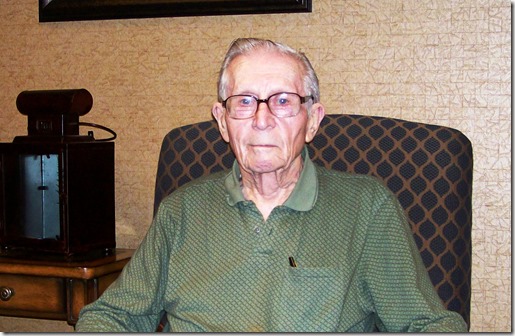 William M.Smith was born October 17, 1922. He was integral in establishing the Ham Radio National Traffic System that serves the United States today.  He is a World War II Veteran and a retired attorney and Magistrate Judge as well as an accomplished musician.

One thought on “A Tribute to Papa Bill”