We had to say goodbye to another beloved family pet yesterday.

Annabelle’s little bunny, Snowfluff, began exhibiting some unusual symptoms on Saturday afternoon.  She had her little head turned slightly to the side, like our dog Toby used to do when he got an ear infection.  As the weekend went on the tiny bunny got progressively worse, to the point where her furry head was turned almost upside down on her body.  In just a few short hours she was so unbalanced that she couldn’t eat pellets out of the purple dish she shared with Batman’s bunny, Princess, and she hopped in dizzying circles around the cage trying to eat her hay.

Yesterday morning I searched for a veterinarian to take a look at the bunny, starting with our usual small animal vet and progressing through the three other valley clinics they referred me to.  Each of the four phone calls went the same; they did not have an exotic animal vet available until later in the week.  For some reason I got an inspiration, and remembered reading a newspaper article about a small veterinary office right near us, with a single practitioner who treated all sorts of small animals.  I looked her up and with one phone call we had an appointment for right after school.

The kids and I rushed home after class to get the bunny, and Annabelle held her wrapped in a towel in a little plastic drawer on the drive to the vet, talking to her and trying to calm her down.   She sat on the wooden bench in the small office and answered the questions asked by the receptionist bravely, but I could tell she was really worried about her bunny.

Poor little Snowfluff was so disoriented that she would occasionally just start spinning in the towel, her entire body thrashing in an effort to right herself.  It was heart wrenching to watch. 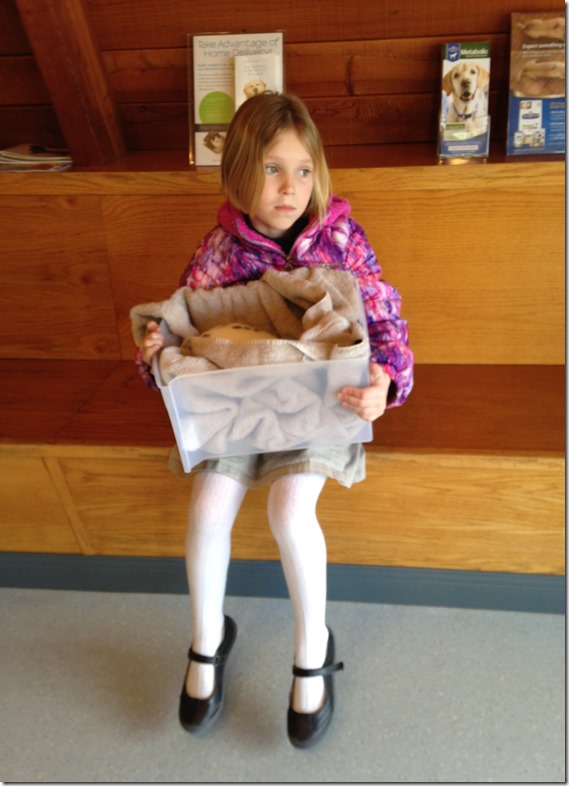 The veterinarian was very kind, and it didn’t take her more than a minute or two to diagnose the problem.  Snowfluff had a grievous infectious disease that causes lesions of infection inside a bunny’s head.  Because the infection was deep in the skull it was impossible to treat effectively, and the only kind thing would be to put the bunny to sleep.  Many bunnies from pet stores (like Zamzow’s, where we got ours) are carriers of the disease, the vet told us.  Some bunnies develop the lesions and some do not.

Soft-hearted Batman was inconsolable at the news, and the vet gave Snowfluff a sedative to quiet her (which got Batman’s attention, as he asked in a snuffling voice “Is that the killing shot?”), then left us alone in the examining room for a few minutes to say goodbye.  After only a few minutes more the vet walked out and handed us a small cardboard box with Snowfluff’s body inside.  Batman insisted on opening the box and stroking the bunny, tears falling on her soft fur as he reached inside and kissed her one last time.

We’ll bury Snowfluff outside, next to Batman’s departed bunny this afternoon once the ground dries up a bit.  The vet told us that we should not acquire another bunny as a pet while  Princess is still alive, since while she might never develop the disease herself she was surely a carrier of it after living with Snowfluff for the past few months.

We talked a lot about Snowfluff after we got home, and about what happens when you die.

Batman said he prefers to think that Snowfluff is a wild bunny now, living in heaven with Batman/Blackie, the bunny that Winston the Maniac Dog dispatched last fall.

As for Miss Annabelle, she is using the opportunity to lobby for another hamster. 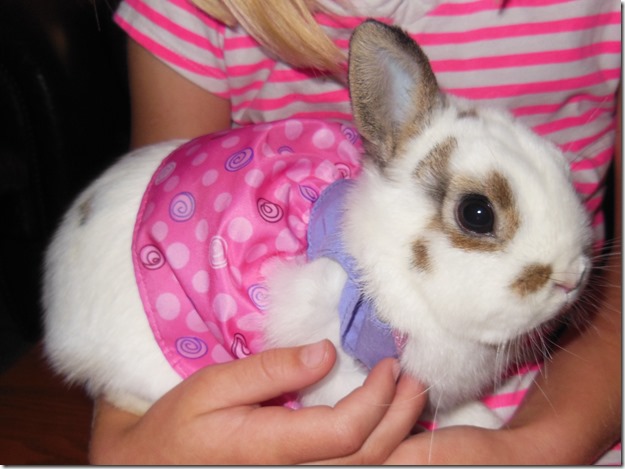 Batman Learns to Ride A Bike

Posted on March 9, 2014 by A Desperate Horsewife

Last Thursday I was working hard on a business project for Desperate Hubby.  When I picked the kids up from school that day I pretty much went straight into my office at home and stayed there until chore time.   I took a break to feed the horses and dogs in the drizzling rain, then was right back in my chair at about 5:30.  If I focused I could probably get my spreadsheets done that night.

At about 5:31 Batman presented himself at my office door.   He wanted to go outside and ride his bike.

Batman owns two bikes.  Both are cute little red machines, one has training wheels and he has ridden it for the last year and a half or so, very sporadically.  The other is slightly larger, with no training wheels, and he got that one from his cousin a year ago for his birthday.  He has never even tried to ride it.

I said no.  Daddy would be home any minute and he was going to make dinner.  I was busy, and there was no one to watch him outside.

“Why can’t I just go outside?”

He said he was going to just ride on the concrete not the mud.  He would wear his helmet and his pads.

He was going to teach himself to ride without training wheels.

Ah, I thought, this shouldn’t last long.  So I said fine, go outside and ride your bike.

I called in faithful Annabelle and asked her to please go out to the garage and watch her brother while he rode on the concrete parking pad, and to report if anything serious went wrong.  They headed outside.

At about 6:15 I decided I had worked so hard on my project that I should probably have a glass of wine.  When I walked into the kitchen I could see Batman outside the open garage door.  He had fallen on the ground; he was not crying, but he was not riding either.  Since it was nearly dark and raining harder than before I convinced him to come in the house and put off his self-taught riding lesson until the next afternoon.

Annabelle was very kind and promised him that as soon as they got home from school the next day she would go outside with him and help him.  Annabelle, incidentally, rides with training wheels too.

Friday was a lovely day, and I had a fun and productive riding lesson with my two beloved mares at the trainer’s in Kuna. I was driving home, pulling the horse trailer (in DH’s truck) when I learned this little life detail:  you can’t trust the computer on the truck to tell you when you are about to run out of diesel.    ‘41 Miles to Empty’ apparently can also mean ‘Forty-one Feet to Empty.’  My drive home subsequently took far longer than I had planned, and by the time I pulled into the driveway at about 3:30 DH had already picked the kids up from their 3:00 school release and they were outside playing.

I immediately spied Batman’s shiny red and black helmet, bobbing quickly down the dirt road.  How cute! was my first thought.  My second thought was, Why didn’t his dad make him change out of his school uniform?

A moment later I realized something else.  Batman was riding merrily along with no training wheels.

I unloaded the horses and put them away as my son rode in circles around me.

“I got it, mom!  I got it!!”  Clearly he did.  In less than two hours practice, with no adult supervision, my five-year old boy child had taught himself to ride a bike.

Especially since this is the same kid who regularly refuses to get himself dressed in the morning because he says he doesn’t know how, and who often forgoes an afternoon snack because he is too lazy to wash his hands.

I watched him ride for another half hour or so.  He crashed hard once, but shook it off as though it was nothing.  This is from the kid who puts half a box of band aids over a hang nail and refuses to bathe because there’s a chance they might fall off in the water. 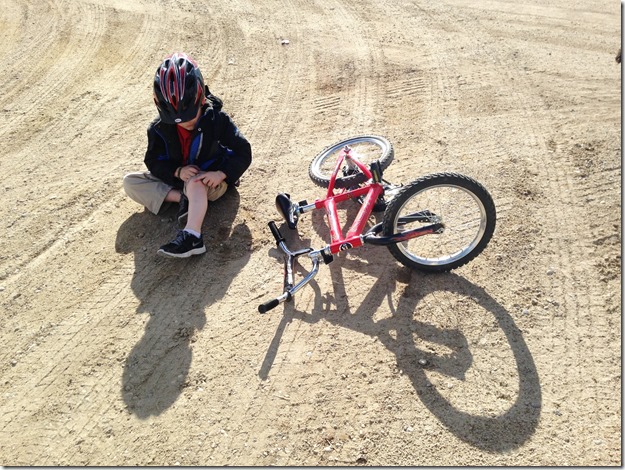 He kept on riding well into the evening, coming in the house only when it got dark.  Saturday morning he was up and ready to go out to ride at 6:00 am (this from the kid who kicks and screams every single morning when he has to be at school by 8:00).  I forced him to wait until it was fully light, at about 7:30, and he spent much of the rest of the day cruising happily around the property.

I have no idea where the child got the balance or the fortitude to learn what I think is a fairly complex skill all by himself.  Anyone who has ever seen me run or ski or even walk for that matter knows it wasn’t from me.  DH admits that it took him days if not weeks of help from his dad and older brother to learn to ride a bike.

I guess he’s a happy freak of nature.

A Sunny Spring Day (kind of)

Posted on March 9, 2014 by A Desperate Horsewife

It was a positively spring-like day yesterday morning.  Temperatures were near sixty degrees, and the sun shone brightly.  The kids and I were excited to take the horses to the foothills for a nice long ride to enjoy the day.

Unfortunately, we were competing with daddy, who was planning a fishing trip to Lucky Peak, so at the last moment we lost our male companion and it was just Annabelle and me.

She caught the horses and took their blankets off so they were ready to load.

We made the forty-minute drive to Eagle in good form, and got saddled up to head out. 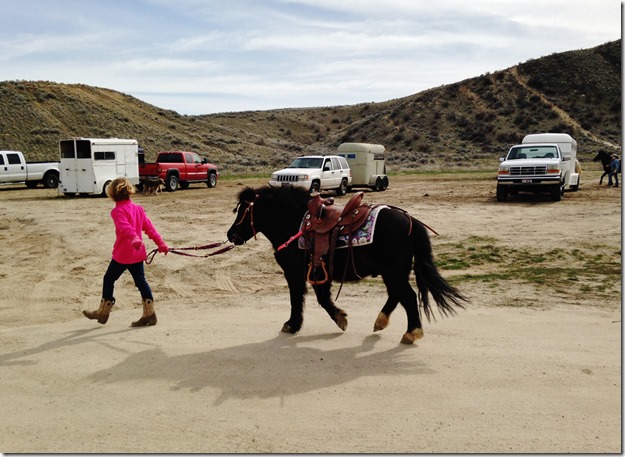 There some clouds moving in, and the wind was a little more than brisk as we walked to the gate, but we were still happy.  Annabelle rode happily along, eating her peanut butter and jelly sandwich as she went.

We climbed and climbed to the top.

And when we got there the wind really hit us.  It was, well, freezing.

But Winston still went for a swim.

Annabelle worked on getting Reno in the pond for several minutes until I told her we had to keep moving or freeze to death.  He ultimately declined the swim.

We saw a strange bone on the far south side of the mountain, and we couldn’t decide what it had come from. Annabelle wanted to pick it up and bring it home.  I said no.

We were very happy to get in the warm truck as soon as we got down the hill.  I had not anticipated the strength of the wind and had forgotten just how cold the foothills can be when the breeze is coming off the snow.

As for the fishermen, well, they had no bites.  Batman summed up the trip in this sentence:  “I really don’t know why someone would name that place Lucky Peak, because there is definitely nothing lucky about it!!”