If you read my Father’s Day post, you know that I am not by nature a baker.  Oh my,  that rhymed.  I’m hilarious.

Anyway, in that post I told an account of the perfectly acceptable (canned) cinnamon rolls that the kids and I prepared for Desperate Hubby on Father’s Day morning.  And then of my eventual embarrassment when my baking skills (or lack thereof, actually) were eventually outed to our culinary-genius-beloved-next-door-neighbor Grandpa Vernon that same evening.

Desperate Hubby’s very sweet brother, known as Uncle Mike around our house, read of my plight on the blog and swooped in to the rescue.  Uncle Mike spent over twenty years as a professional baker here in the Treasure Valley, and he knows his way around a kitchen.

My brother-in-law called Desperate Hubby and told him that he would be here at 8:00 sharp on Saturday morning to teach me and the kids how to make homemade cinnamon rolls.  I was thrilled. I got up early yesterday morning and went to work spiffying up the kitchen.

I had to make a quick batch of spinach dip for a barbecue later in the day, and I was just pushing the last of the leftover ends of green onions into the garbage disposal at about 7:30 when the dogs started barking and DH said “Mike’s here!”  Well crap, I wasn’t dressed, didn’t have on any makeup and I hadn’t even brushed my teeth.  Good thing I am the one taking the pictures, that’s all I have to say.

Uncle Mike came in and immediately took charge of the situation.  He was armed with two bags of supplies, and he lined them up neatly on the kitchen counter.

All of the usual suspects were involved.  They included:

There were a couple of other ingredients there too.  Very intriguing.

3 lbs. of Fresh Made Doughnut Dough (Mike ordered this the night before from Paul’s Market, one of the last scratch-bakeries in our valley) and picked it up this  morning.

and 2 lbs. of Doughnut Glaze, also picked up from Paul’s Market.

Mike got his helpers lined up on the breakfast bar so they could reach under the cabinets and help with preparations.  Our kitchen works perfectly for small helpers to participate.  As long as they don’t get too much bigger. 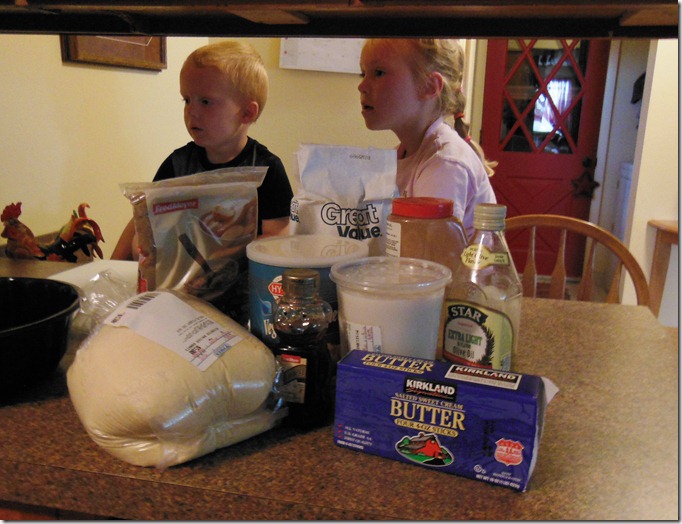 Mike started off by making “Caramel Smear” for the first dish, which was to be Cinnamon Pull-Aparts.  The ingredients of Caramel Smear are as follows:

I had to take Uncle Mike’s word for the exact measurements, because he just poured the pourable ingredients in until they looked right, then scooped the shortening out with his (freshly washed) hands and dumped it in the bowl.

It was just like watching the cooking channel, right here in my little kitchen.

He let the kids get involved right away.  Annabelle poured the honey in until Uncle Mike said it looked right. 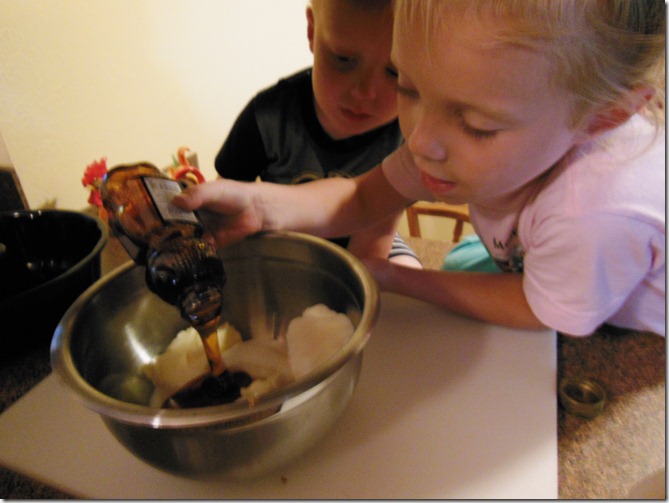 Everyone watched avidly as he blended the ingredients with my mixer. 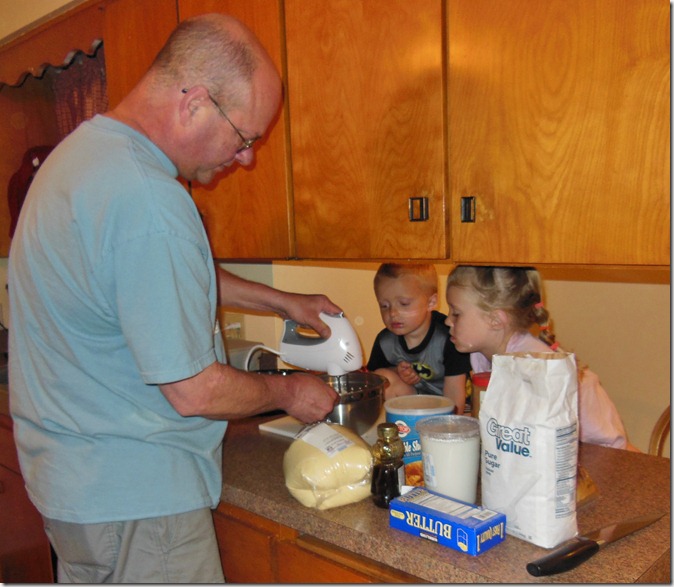 Then it was time to smear the Caramel Smear all over the non-stick bundt pan we were using for the pull-aparts.

Batman and Annabelle were in charge of that.  Of course, first they had to clean off the beaters.

In a very surprising turn of events, Batman was completely grossed out by the sticky mixture on his hands, and quit smearing after only a few seconds to go spend ten minutes washing his hands.  As Annabelle said “Mom, how can a boy who likes to play in the mud so much not like to have his hands sticky?”

I just said I didn’t know. 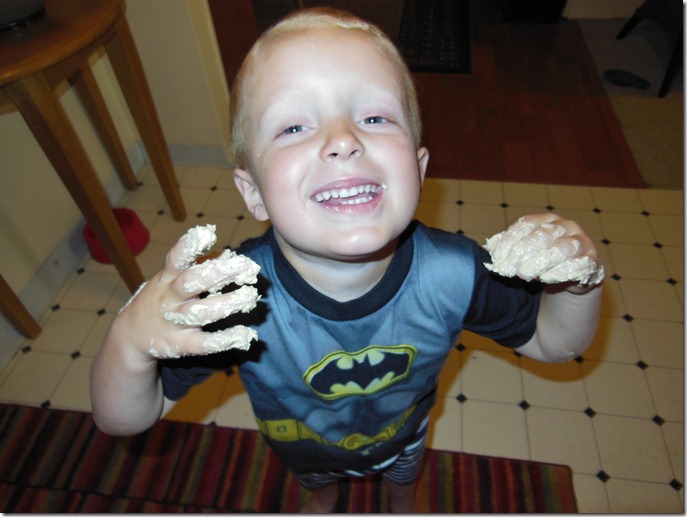 Once the smear was completely smeared, Uncle Mike began cutting the doughnut dough into two- or three-inch pieces, and rolling them around in a little olive oil. 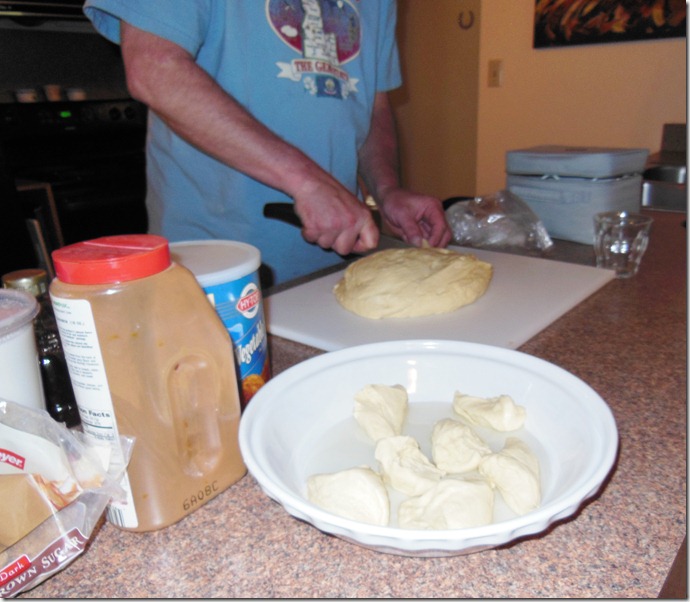 Since Annabelle still had dirty hands, she started right in rolling the pieces of dough in a big heap of cinnamon and sugar that Uncle Mike had put on a cookie sheet. 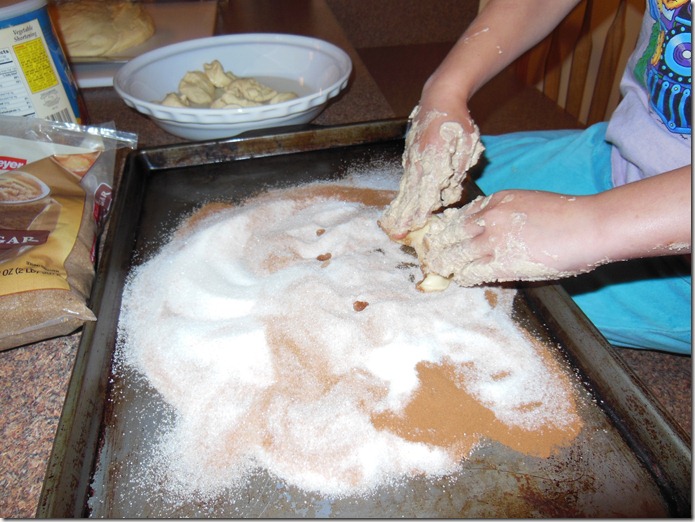 Then Uncle Mike had her place them randomly in the smeared bundt pan.

When Batman re-appeared from the bathroom with clean hands, Uncle Mike asked him if he wanted to help.  Batman answered with a resounding NO!  He didn’t want to get his hands dirty again.

Annabelle did a wonderful job of placing the pull-aparts in the pan.  This is what it looked like when it was all finished.  Yummy huh?

In the meantime, Uncle Mike had pressed out the remainder of the doughnut dough into a big square with his fingers.  He didn’t need no stinkin’ rolling pin.  This dough would make the cinnamon rolls.

He drizzled a little olive oil over the top and rubbed it around, then he had Annabelle cover it with more of the cinnamon and sugar mixture.  Batman did climb up to watch this process, but he was very careful to keep his hands back from the action.

When Annabelle was all finished with the sugar mix, Uncle Mike started rolling up the dough for the rolls. Both kids helped with this, but Batman made sure he didn’t touch any more of the sticky parts than were absolutely essential.

When the dough was all rolled up, Uncle Mike cut it into inch-or-so thick slices.

When he cut the first one he held it up and guess what he said?  “Look, just like from the can!”  I said he was a nice guy.  He’s also a wise-ass.

The kids put the rolls neatly onto a baking sheet.  Sort of.

Uncle Mike put the rolls and the pull-aparts into my oven on the lowest temperature setting (for mine that was 170 degrees, and he turned it off once reached that temperature) to rise.

The dough immediately started to plump up.  It smelled heavenly.

After about 25 minutes, when the dough looked like this, Mike turned the heat up to 185 degrees.

Then he cleaned up.  Everything.  Washed all the dishes.  Wiped down the counters.  For a wise-ass, he’s not a bad guy. 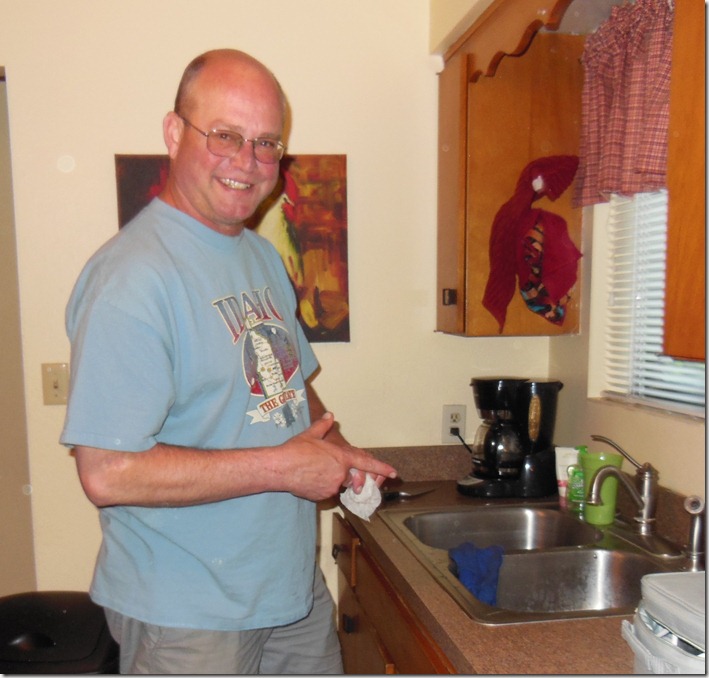 After about 15 minutes the cinnamon rolls were done.  They looked and smelled divine.

Following a little cooling time, Annabelle was recruited to glaze the rolls.  Uncle Mike simply put a little glaze in a small cup and let her pour it all around the top of the rolls. 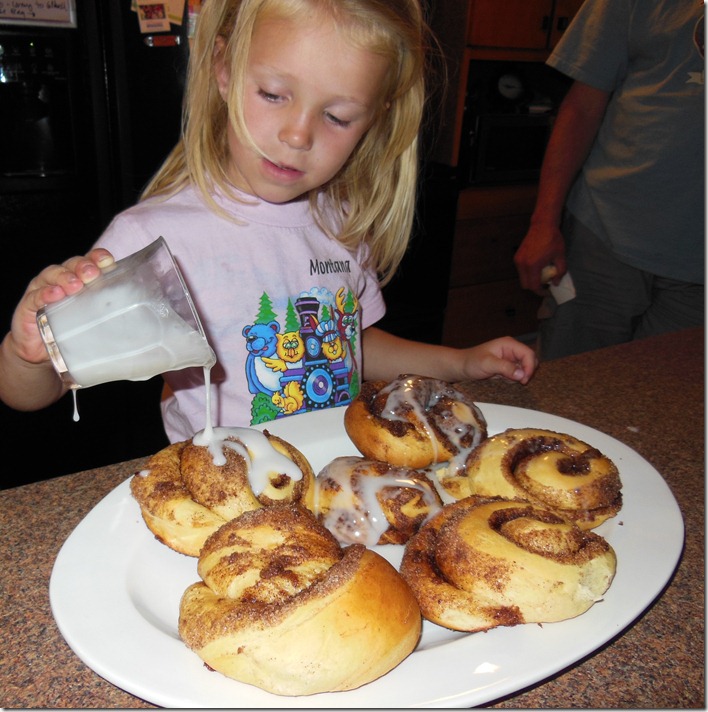 The finished product looked even better than the outside of the package of the canned cinnamon rolls I had made last week. 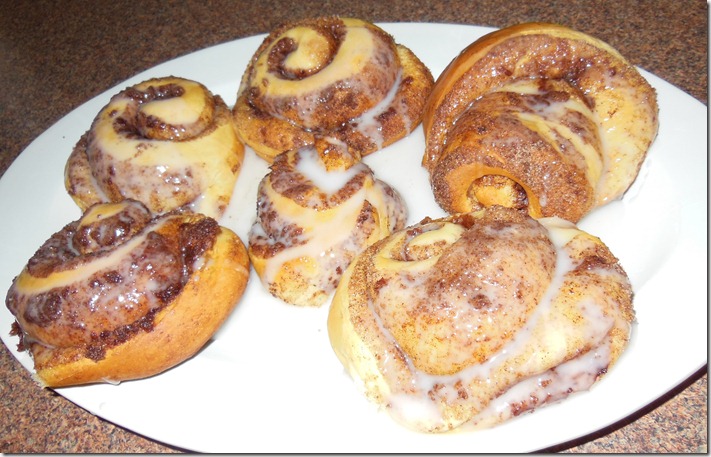 About ten minutes later, he pronounced the pull-aparts to be done as well, and pulled them out.  They looked great. 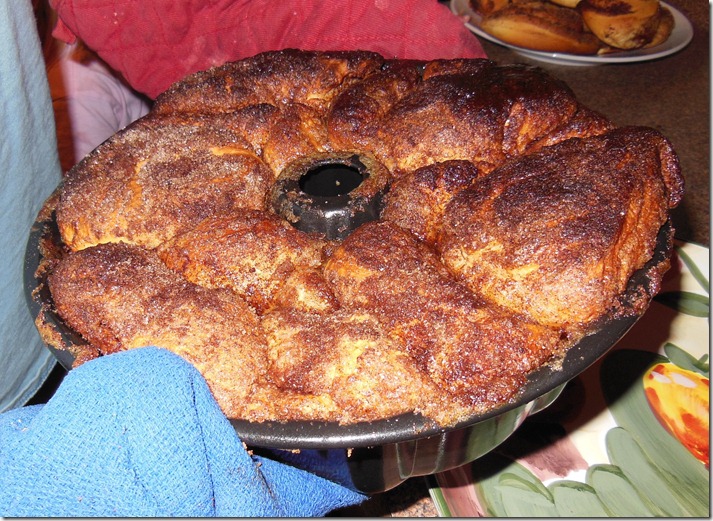 He turned the pan over and dumped them out, and the gooey sweet caramel smear ran all over the plate.

Batman got to do the honors with the glaze this time.  He was happy he could accomplish this without any collateral damage in the form of stick hands.

The finished pull-aparts swam in an ocean of sugary bliss.  The gooey caramel melded with the luscious glaze.  It was heaven on a platter.

I served the pull-aparts up with a smidgeon of extra sauce over the top. 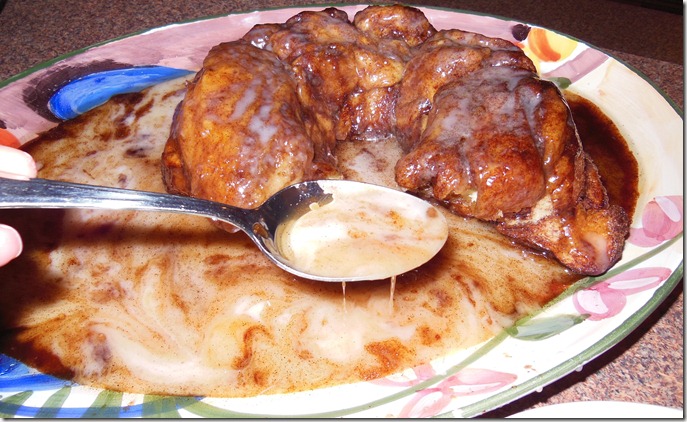 Just look at this. 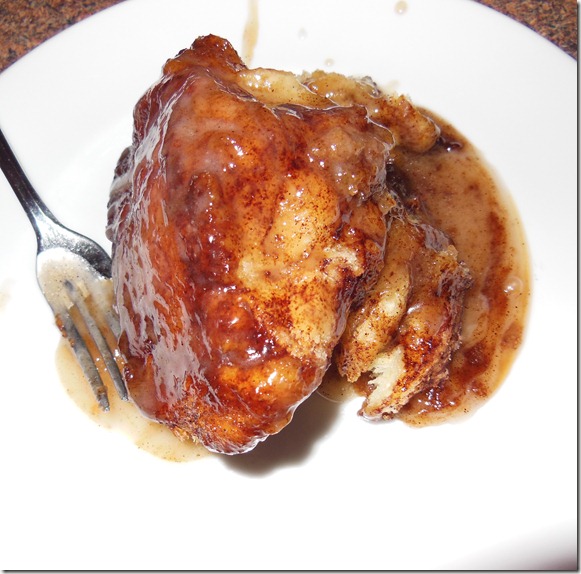 Believe it or not, the pull-aparts and the cinnamon rolls tasted even better than they looked.

When I took a bite I did swoon.  Or maybe it was just the blood sugar rush.  Either way, I was a happy girl.

You truly are a prince among men and an awesome uncle.  And a wise-ass.

Most people who know our family very well know that my husband is really the chef of the family.  Anyone who has experienced his impeccably grilled flank steak or dined on his most perfectly cook giant lobster tail (complete with garlic butter) will never forget that.  I swoon to think of it.  But I digress.

Because Handsome Hubby works so much, though, I end up doing most of the heavy lifting when it comes to routine food prep in our house.  Oh yeah, that and the fact that I don’t have a job.

I am a busy mom, though, and thus a big fan of the one-dish type meals.  The slow cooker and I are on very close terms, if you know what I mean.  Weekend breakfasts at our house used to be the sole domain of Handsome Hubby, but since he has been working so much I’ve been trying to pitch in and help out in that area a little.  Last weekend I made up this little dish that I call…..

It is super easy, and, if you have an oven proof skillet, it truly is a one dish meal.  I think you could easily customize this to suit your family’s tastes. I used:

Two medium baked potatoes, cold (I originally made this with leftover potatoes from the night before, but this time I just threw a couple in the oven last night while I waited for the pizza guy).  What can I say – we live in Idaho.  Potatoes are a required food source.

A pound of bacon

Half each of a red, orange and yellow pepper

Give your bacon a rough chop and throw it in a pan.  I used a cast iron skillet because I love the way it makes things nice and crispy. And it’s ovenproof.

While the bacon gets cooking in the pan, chop up the rest of the ingredients (except of course for the cheese and the eggs – but do I really have to say that?) I leave the skins on the potatoes and chop them in big chunks.  You can say rustic or you can say lazy.  Anyway….next you throw all that stuff in the pan with the bacon. 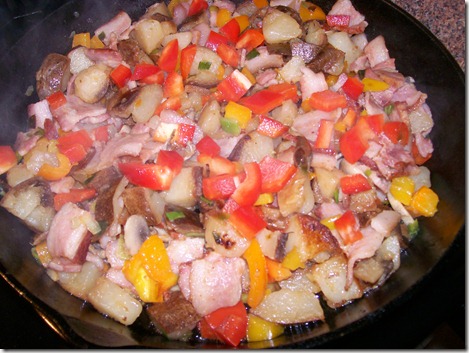 You can certainly drain part of the bacon grease if you want before you start to sauté up the rest of the ingredients, but I leave it in.  I like the way it gives the dish a nice salty bacony flavor.  And I believe it makes my coat shiny.

I let that cook, turning it over frequently, for about thirty minutes.  Once everything is cooked through and caramelized together, I beat up my eggs and pour them over the top.  You just want the ingredients to be sort of sitting in the eggs, not necessarily drowning in them.  Think hot tub versus deep end of the swimming pool.

A picture here would have been very helpful.  But I’m new at this. Sorry.  Anyhow, after you pour the eggs in, sprinkle your cheese on top.

Bake the whole shebang for about thirty  minutes at 350 degrees.  This gives you time to wash up the cutting boards and clean up the muddy paw prints that the maniacal puppy inflicted on the hardwood floor, if required.

When it is done it should look something like this:

I let it cool on a trivet for ten minutes or so to really set up, and then cut it into pizza like wedges. Wait, I’m sensing a theme here.

I put a few chopped tomatoes on top because I like the fresh flavor with the salty sweetness from the onions and peppers and the bacon combination.  Plus my kids love them.

This is a hearty filling dish that warms up beautifully in the microwave for lunch later in the day.

Give it a try and let me know how it turns out!