It is amazing how the universe works.

Horsecrazy and I were at a horse show last fall.  She was riding her sweet little pony Reno, helping me move cattle behind the chutes for the cutting portion of a reined cow horse futurity. Reno is the perfect little pony in many ways.  He is beautiful, kind and quiet and takes very good care of his rider in any trail-riding situation.

He is not so fond of the arena.

On that particular day we were riding in an outside arena at the Idaho Horse Park.  Reno and Annabelle were loping on one side of the arena, I was loping my beloved mare Spice on the other side.  Suddenly the pony veered across the arena.  He ran under my mare’s neck before I could even register what was happening.

Then he bucked my baby girl off.  Right under the feet of my mare.

I looked down to see the hard, black, shod hoof of my horse land on MY LITTLE GIRL’S PIGTAIL. She had a brand new pink riding helmet that she had been wearing all morning.  (That is a whole other story).  But she was hot and sweaty.  She had taken the helmet off for just a few minutes.  It was hanging on the fence post in the arena.

She was fine.  I was fine, but shaken up.  She got right back on and rode the rest of the day.  But I was haunted.

When we went home that night I told Desperate Hubby that we needed a new arena horse for Horsecrazy.  Sooner than later.

We didn’t have the money for a new horse right then.

The next day we went back to the horse show. We ran into HT (horse trainer) from the old days, who laughed at Annabelle trying to get her pony to move as he stood in the middle of the arena bucking and bucking.  She was wearing her helmet that day.  Then HT told us that his old client and our old friend  Dave wanted to give away his show horse to a kid.  Hurry he said.  The horse won’t last long.

This was not just any show horse.  Grumpy is an elite show horse. He was bred, trained and shown by the pre-eminent breeder of quarter horses in the United States. His breeding is the definition of royalty in the reining and reined cow horse world.  Our friend Dave had owned him and shown him for the past many years.  He wasn’t riding Grumpy anymore, and wanted him to go a good home with a kid to ride him.

I was on the phone before HT finished explaining.  We picked up Grumpy that afternoon.

In a gesture so purely generous that it takes my breath away, Dave not only gave Annabelle her dream horse that day.  He took her in the tack room and gifted her with an almost brand-new saddle his daughter had outgrown.  Then he let her pick out her choice of wool show saddle pads, any one of them well over $150 to buy.

Two days later we got an envelope in the mail with Grumpy’s registration papers, transferring full ownership of this fancy, fancy horse into Annabelle’s name.  Her very own horse, at age five, a local legend in the show horse world.

What an amazing guy Dave is. 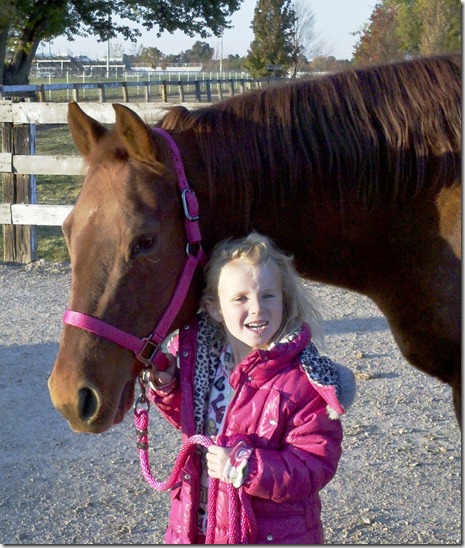 Grumpy and Horsecrazy have been inseparable since.  She rides him pretty much every day.

In all sorts of situations.

Here at a reining clinic in the cold, cold days of January.  She was the only rider under about twenty years of age. 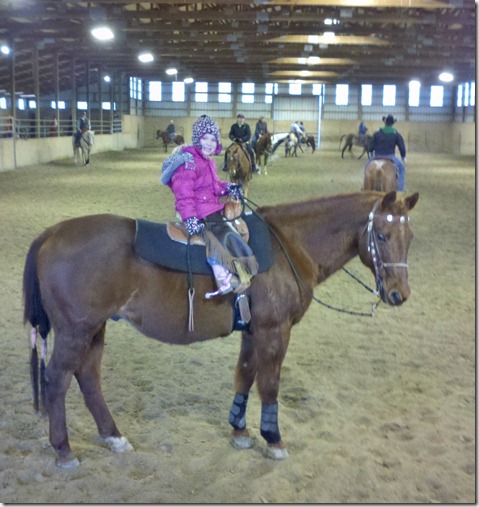 To the top of the foothills north of Eagle, Idaho.

And around our small arena at home about a million times. 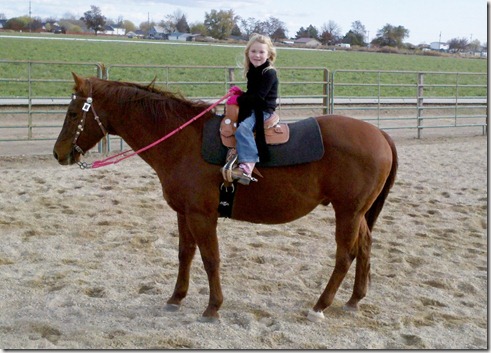 They love each other.  And if you noticed, he loves having his picture taken as much as my baby girl endures it.  He puts his ears forward every time he sees a camera.  This is true.  He is a photo hound.

I wrote this poem about Grumpy when Desperate Hubby and I were reflecting on how lucky we were to get such a great horse given to us.  I hope it shows how much we love having him in our lives.

His name is Old Grumpy

He needs a big trailer,

So the truck needs rewired

A new set of reins

Some lessons are needed

Know someone who trains?

His shoes are expensive

And teeth need a float

The money he’s cost us

Could have bought daddy’s boat!

Our old hay’s too dusty

As well as the horse treats

But we don’t mind at all

So a thousand or more later

Give or take some small change

A gift that’s so generous

Is hard to imagine

Such kindness and giving

Is just hard to fathom

For Grumpy’s no throwaway

By no cow he’s daunted

So the cost we’ve absorbed

From this gift of such niceness

For Old Grumpy is Priceless!

Thank you for your generosity, Dave.