From the Pub Crawl to Tasmania

Posted on April 6, 2012 by A Desperate Horsewife

After Rob’s fall from Shandy, he spent the rest of the Pub Crawl in survival mode.  Our riding portion of the trip was pretty much done, but we were scheduled to participate in a local parade as part of the  “Land of the Beardies” celebration.

Rob was assigned a new horse for the parade, a 22 year old gelding named Hard Times. He tried to be a good sport about the ride, but I could tell he was in increasing distress from his injured wrist, and alarmingly, also his back, which had taken a major jar from his fall on the hard packed dirt.

We were all glad when the parade was over and we returned to the ranch for a big barbecue and plenty of beer drinking.

The day after the parade we drove to a local caving area, and crawled way down under the earth (down under, get it? har har) in some massive tunnels.  I had never been in a cave like that before, and it was very interesting.  I was surprised that I didn’t feel at all claustrophobic.

After our caving experience, we headed a little ways out to try our hand at fossicking.  Fossicking is a term used in Australia for recreational prospecting – basically the same process early American miners used panning for gold.

I had no luck at all with my fossicking exploration, but Rob found three tiny sapphires that he ended up throwing back in the water.

He was getting pretty crabby by then.

I thought it was because of this.

No, he was not crabby because I took a picture of him with his eyes closed.  Look closely at his mouth and you will see the gum he is clenching tightly between his jaws.

My normally very smart little brother had decided before our trip that an Australian and New Zealand adventure would be the perfect place to wean himself off his years-long habit of chewing tobacco.

Copenhagen, to be precise.

He had purchased a seemingly life-time supply of nicotine gum to aid him in his efforts, and that seemed to tide him over pretty well during the early part of the trip, when things were going well.  After he injured his wrist, though, and especially as his back started to hurt, the nicotine delivered by increasingly large mouthfuls of the gum just wasn’t doing the job.

We left our friends from the Pub Crawl and flew to Melbourne, where we had scheduled a two day layover to get some laundry done and see the sites before we headed to the island of Tasmania.

In Melbourne we stayed at the beautiful Hotel Sofitel.  After checking in, we discovered that Rob had been assigned a beautiful, large suite, with a full living room, dining room, king sized bed in the bedroom and a separate walk-in dressing area.

I had a regular room.

The disparity of accommodations did not even cheer up my surly brother.  It would not be the last time on our trip that Rob enjoyed a far better sleeping arrangement than I did, but I am jumping ahead in my story.

We were in Melbourne mainly to do some errands, but we did take a couple of (very uninspired) pictures. Sheesh. 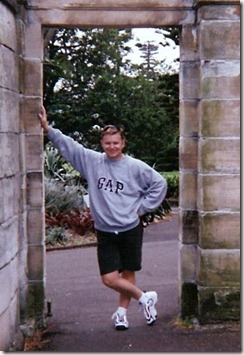 The first order of business was to get our laundry done.  We had two big bags of wet, muddy and stinky clothes, and it was going to cost more than they were worth to get them cleaned at the hotel.

A nice person at the concierge desk directed us to a laundry just down the street from our accommodations.  We lugged our bags down to the tiny place, where a shriveled old Indian man decided the charges by lifting the bags off the table one by one.  $20 each, he said.  It was a bargain.

On to the next order of business.

Rob had determined that his crabbiness was due to his lack of Copenhagen, and told me that if we could find him a can or two of chew he would return to his normal cheerful self.

Unfortunately, Melbournians (I made that term up) apparently don’t chew Copenhagen.  The first few tobacco stores I called from my (small, regular) room at the Sofitel did not carry it.  I finally found a store way across town that did have some cans available, at an astronomical price.

I loaded up my brother in a cab and away we went.  We bought all the Copenhagen they had in the store.  On our way back to the hotel we had a nice Italian dinner and stopped at a wine bar to pick up some port for a friend.

A few hours later Rob announced that it had not, in fact, been Copenhagen withdrawal that was making him cranky.

He was just cranky.

I begged him to go the doctor.  He refused.  I watched in dismay as my normally easy-going, happy-go-lucky brother turned into a snarling, ill-tempered traveling companion.

I thought it was going to be a very long next couple of weeks.

We were scheduled to travel on the lovely Spirit of Tasmania to our next destination, leaving at around 5pm, sailing overnight, and arriving in the Tasmanian capital of Devonport at about 8:00 the next morning. 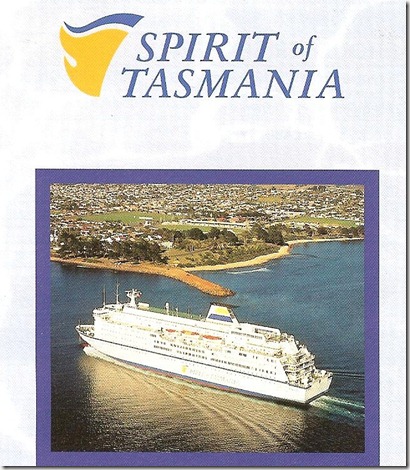 On the way to the boat I talked my brother into stopping at a local pharmacy to see if they could recommend anything for his back pain.  The pharmacist sold us some ibuprofen and sent us to his brother down the street, who was Physiotherapist.

The “Physio” gave Rob some electrical stimulation therapy for his back, followed by a massage, then taped him up as best he could and sent us on our way.

To our 10 day backpacking trip through the wilds of Tasmania.

What’s wrong with this picture?

Next week we’ll travel to Tasmania, and learn how sometimes the most unexpected turn of events can turn into an adventure all in itself.