Posts Tagged With: kids and hunting

Posted on November 24, 2013 by A Desperate Horsewife

Did I mention my husband is a really good cook?

In the course of conversation Grandpa casually mentioned that he’d noticed a couple of brave pigeons had returned to the barn after the much-touted Pigeon Patrols had scared most of them off a couple of weeks back.  (See Batman’s Pigeon Patrol 2013:  If It Flies It Dies, if you are interested).

Batman was all over that information.

When I left for yoga yesterday morning at 10:00, he was dressed in full camo and crowded into the recliner next to DH, who was trying to catch an early football game or something equally compelling on TV.  I asked the boys what was up.

“I’m waiting for daddy to get dressed.  We’re going to go out and shoot those last two pigeons” my little sportsman matter-of-factly explained.

When I came back home about an hour and a half later, the kids were nowhere in sight and DH was waiting for me in the garage so he could leave to run some pre-whitetail-hunting-trip errands.  My question as to the whereabouts of the little people was answered with “they are out in the horse pens skating on ice puddles.”

I changed my shoes and coat and went out to check.  Sure enough, there was an ice puddle about 5” by 3” that was strong enough to hold the weight of the kids, and they were sliding about it on their boots, holding two very unenthusiastic cats that were apparently participating in a “dance contest”.

I wandered around petting the horses and looking at the water holes that had NOT been strong enough to hold the kids, which now were sloppy puddles with a few remaining shards of ice clinging to the mud around the edges.

My meandering took me near the entrance to the covered barn area, which reminded Batman to tell me that he and daddy had “shot a pigeon but we must have only got him in the bum because he flew away.”

Winston accompanied me on my rambles, as usual walking right beside me with his head held at the precise height that allowed me to pet him as we strolled along together.  In the darkest corner of the little barn he left me, suddenly dashing to the fence and running out into the sunlight at full speed with a dead bird hanging from his mouth.  Instead of the usual pigeons we had been seeing in the barn this bird was a (long) dead starling. 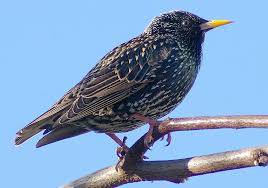 The one we found looked like this (well, it did after I pried it out of poor Winston’s mouth and gave it to an ecstatic Batman).

I hadn’t seen my little boy so happy since he had flown the last dead pigeon around by its poor lifeless wings.

He held it by the head.

He held it by the tail.

He flew it merrily about by the wings.

He showed it to Winston (who no doubt thought “Wait a minute boy!  That’s mine!”)

He showed it to Freckles, who showed far more interest in a dead bird than I thought a horse would.  Or should.

It was unclear what had caused the demise of the small speckled bird, but whatever it was made my macabre little hunter very happy.  His exact words were “Mom! At least I got to have one dead bird in my day!”

When he was finished socializing with the bird he walked happily over to the Bird Cemetery (I think he would have whistled if he knew how (Batman, not the bird)), where he buried the starling next to Perry II, Hunter and Tougher.

I asked him what the name of the new occupant was, and Batman answered without hesitation.

Once the bird was properly buried in the barely thawed mud and covered with dozens of small rocks Batman came in the house.  He was cold and wanted to put his snow pants on so he could go “ice skate” some more.

“What have you been up to?” he asked.

“I found a dead bird dad!  His name is Puffy and I buried him next to the other birds.  It is so cool how many birds I have now.  When we move to a new house someday I am going to dig all those birds up and take them with us for a Bird Graveyard!”

I’d like to add two things for the record:

1)  We are not planning on moving to a new house anytime soon, and I sincerely hope that Batman finds another fascination before that time arrives.

2)  It sure does seem like I have been writing a lot of bird stories lately.