They Shoot Horses Don’t They?

Well, as some of you know, I have spent the several days nursing Desperate Hubby through a painful surgical procedure.

This is the story of how and why it happened.  The ending is yet to be seen. Just kidding.  I have too much invested in him at this point to do anything silly.

A long, long time ago, a mere week or so after celebrating his 20th birthday (I told you it was a long, long time ago), Desperate Hubby (I’ll just call him DH for short) had a very serious motorcycle accident.  In the dark of the early morning hours, while driving his Yamaha 750 at speeds estimated of between 80 and 115 miles per hour, he crashed.  Big time.

After bumping his front tire into a sidewalk in downtown Boise, the bike slipped sideways with him underneath, sliding the entire length of the gutter until it came to a stop.  Against a big power pole.

At that point DH was thrown completely free of the bike and all the way across the street, landing in a heap.

Yes, there were adult beverages involved.

His right foot was basically destroyed in the crash.  The big bone on top, called the Talus, was completely smashed.  All the tendons that ran from the ankle to the big toe were burned off, as was the skin and flesh on his leg from ankle to knee all the way to the bone.  It was a true miracle he lived.

The doctors reconstructed his foot at that time and he went through a several month- long healing process. During that time he discovered his deep inner love of Yarn Latch Hook projects.  You know……. where you take the mesh backing with a picture of a kitten imprinted on it, and then hook little pieces of yarn through each hole with a hook to make the design in yarn.  Kind of like “Paint by Number” except with textiles.

I’m not making that up, but for some reason the vision of it still makes me laugh, and no, he doesn’t do it anymore.

Anyway, fast forward almost twenty years later.  When I met him I didn’t think of doing a pre-purchase exam.  He seemed healthy and relatively sound.

He did have problems with his foot from time to time, mostly after too much activity like loading in and out for the band, or climbing a ladder to put up Christmas lights. He always worked out, and ran and did all sorts of exercise programs, and though he occasionally complained about his foot and often had to ice it after the end of a long day he seemed relatively unaffected by the old injury.

Last fall, after a new regime of cross-fit training and an increased running program, DH started having more problems with his foot.  He was sore more days than not, and the inflammation seemed to be increasing.  He decided to go and have it looked at to see if there was anything that could be done.  Against my advice (I am a big fan of “real” doctors) he decided to go see a well known local podiatrist for a consultation.  In doing so he embarked on a five month trail of agony.

From the initial (mis-) diagnosis of gout, to a subsequent taping and purchase of shoe inserts which changed the angle of DH’s foot so abruptly he was rendered completely non-weight-bearing and in total agony from Thanksgiving all the way through Christmas (no Christmas lights this year), the pretend doctor struggled with a diagnosis.  He admitted that he was stuck on the gout diagnosis, though all of the blood work to test for that malady was in the normal range.  He could see no obvious problems from his studies of multiple x-rays.

He encouraged us to go to the next testing step.  Since the treatments for gout had been to no avail, an advanced testing protocol was needed to determine if there were torn or inflamed tendons in the foot.  Finally at a point of desperation, we agreed to pay for an MRI.  Our Blue Cross self-employment insurance is not the most robust, so it was a big expense, but we felt we had to know what was going on.

Guess who owned the MRI machine and administered the test?  Yep, pretend doctor.  He assured us that the MRI would give us a definitive answer; provide a treatment plan, and get DH off the crutches he had “borrowed” from our nice neighbors some months earlier.  He bragged and bragged about his radiologist, newly hired out of one of the large area hospitals.  He said having the radiologist on our team insured a speedy and accurate diagnosis.

Meanwhile, my mother-in-law, DH’s mom, kept mentioning she thought he should maybe see Dr. Coughlin, the top hand and foot orthopedic specialist in Boise (and a “real” doctor) who was in fact acknowledged to be one of the top foot docs in the Northwest.  I love my M-I-L.  She is the perfect combination of attentive and interested, happy to offer advice if asked, but not one to barge into your life if you aren’t interested.  And she’s always right.

I tried to encourage DH to listen to her and seek another opinion, but he was having none of it.  He is loyal to a fault, and wanted to give the pretend doctor a chance to figure it out.  I could see his point too; the pretend doc had all the background info, including an array of x-rays, history of the past few excruciating months, and the coveted MRI.

We eagerly awaited the results from the MRI, and arrived at the doctors office full of anticipation. Greg put his crutches down and hopped to the table. Pretend doctor came in with his clipboard, his free hand characteristically shoved down the front of his scrubs, which I always thought was pretty weird.

Then he uttered these words.  “I hate to tell you, but I have definitely mis-diagnosed you.”  He talked about how he initially had been so sure the problem was gout, then since the normal treatments didn’t work had changed his mind to think there was something more going on.  The MRI, he told us sadly, showed no problems that could account for my poor hubby’s increasing pain and inflammation. There was some evidence of the contusions from the past trauma, but nothing he felt could be bad enough to cause the problems at hand.  The pretend doctor said he had to think about it; he really had no idea what was wrong.  His exact words were something to the effect of “I am used to hitting fastballs all day long but you threw me a curve!”   He prescribed the powerful anti-inflammatory Celebrex, and said his best treatment plan included the construction of expensive, non-insurance covered custom orthotics and long-term prescription anti-inflammatory drugs.  He told us he would continue to research and evaluate the options and get back to us.  We never heard from him again.

We left the office feeling defeated, DH crutching it through a light winter rain to the car in the parking lot. The next day I went to fill the Celebrex prescription.  My husband had been on numerous types of prescriptions over the past couple of months, both to treat the pretend gout and then just for the pain.  None of them had done a great job, so I wasn’t optimistic about this one either.

At the pharmacy counter of Wal-Mart I was informed that our insurance company had turned down the Celebrex prescription pre-authorization because DH had previously been diagnosed with……gout.  I was furious.  That was the last straw.

I filled the expensive prescription, paying the total fee out of pocket, and on the way home called my mother-in-law for support.  She again urged me to have DH get a second opinion from Dr. Coughlin, and I walked in the door armed to discuss it.  DH was in his familiar position, sitting in the recliner with ice on his foot, crutches leaning against the adjacent love seat, watching golf on TV.

After a brief discussion, somewhat heated on my side because I was so angry at the incompetent doctor, he agreed to seek a second opinion.  I called Dr. Coughlin’s office the next morning, asking about the procedure for seeking a consultation.  They informed me that Dr. Coughlin was retiring and not taking new patients, but if I wanted to send the records over they would have them reviewed by the other doctors in the practice and get back to us.

That wasn’t good enough.  We needed instant action.  I discussed with DH the possibility of going to see an orthopedic surgeon in the practice that had cared for me when I broke my arm and back a few years ago in a horse accident. He agreed and the following Monday we made an appointment with Dr. Shevlin.

DH went to his doctor appointment alone as I had a prior commitment on that afternoon.  He called me from the doctor’s office.  The real doctor had not even needed to look at the MRI.  One x-ray view, taken in seconds at the office and viewed on the doctor’s cell phone, showed the problem.  A ridge of bone spur as high as the Himalayas had formed across the Talus-Navicular joint.

Dr. Shevlin simply shook his head when DH asked him why the previous “doctor,” also purportedly a surgeon, had missed the diagnosis.  “Everyone sees things differently,” he said diplomatically. He expressed amazement that DH could even stand, let alone walk, with the degree of joint damage that had been done to his foot.  I knew from past experience that this type of diagnosis was life threatening for a horse.

There was only one choice, Dr. Shevlin said.  A double-joint fusion of the Talus-Navicular joint.  DH was relieved and enthusiastic.  Finally a real solution!  “When do we do it?” he said.

Dr. Shevlin laughed.  “Oh, I don’t do it,” he said.  “Nobody in my practice does it. It is waaaaay too complicated.  There is only one doctor in the northwest that does these things.”

Of course if was Dr. Coughlin.  Told you my mother-in-law is always right. 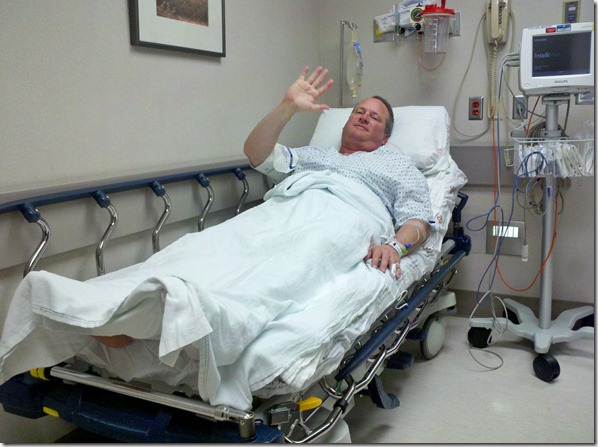 Stay tuned for a play-by-play of the surgery and hospital visit, and an update on how the impatient patient is doing.

8 thoughts on “They Shoot Horses Don’t They?”